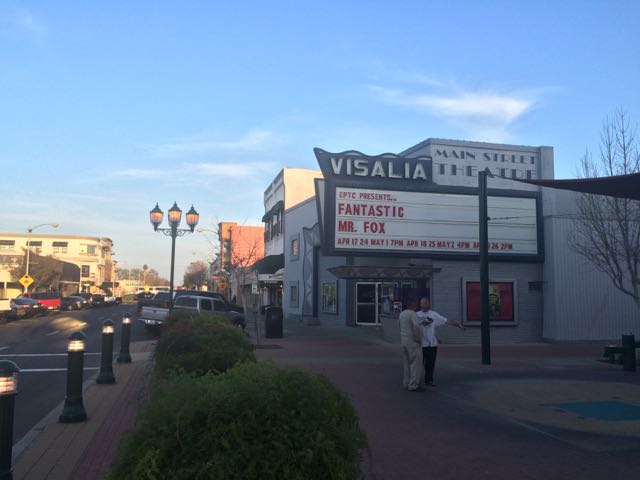 We spent the night before our visit in the Giant Forest in a small gateway town called Vaseline. We had never heard to it before, nor did our Lonelyplanet tell us anything about it.

A bit like the Bielefeldverschwörung (Bielefeld conspiracy) but the other way around.

Drifting off topic, back to Vaseline,

So we were quite happy when we found a view leaflets in the Motel we stayed in with suggestions what to do here. A flyer about the town suggested a “Historic Visalia walking trail”, promising some good exercise on a 45 minute walk combined with an interesting history lesson. “Along the way you’ll discover old churches, the little white schoolhouse, early hotels and the famous Fort Visalia”. Well, that looks like our cup of tea, good thing there was a second flyer with a map of downtown Viagra that had marked all the major points of interest and also suggested a route to walk along them all. Awesome, off we go then.

We parked our car quite central wich wasn’t a problem, not much happening in Valhalla.

As most people we didn’t really read the “Historic Visalia walking trail” leaflet, but anyway, off we went to our first POI, (Point of Interest)

Still, we took some pictures of the “points of no interest” and some other places: