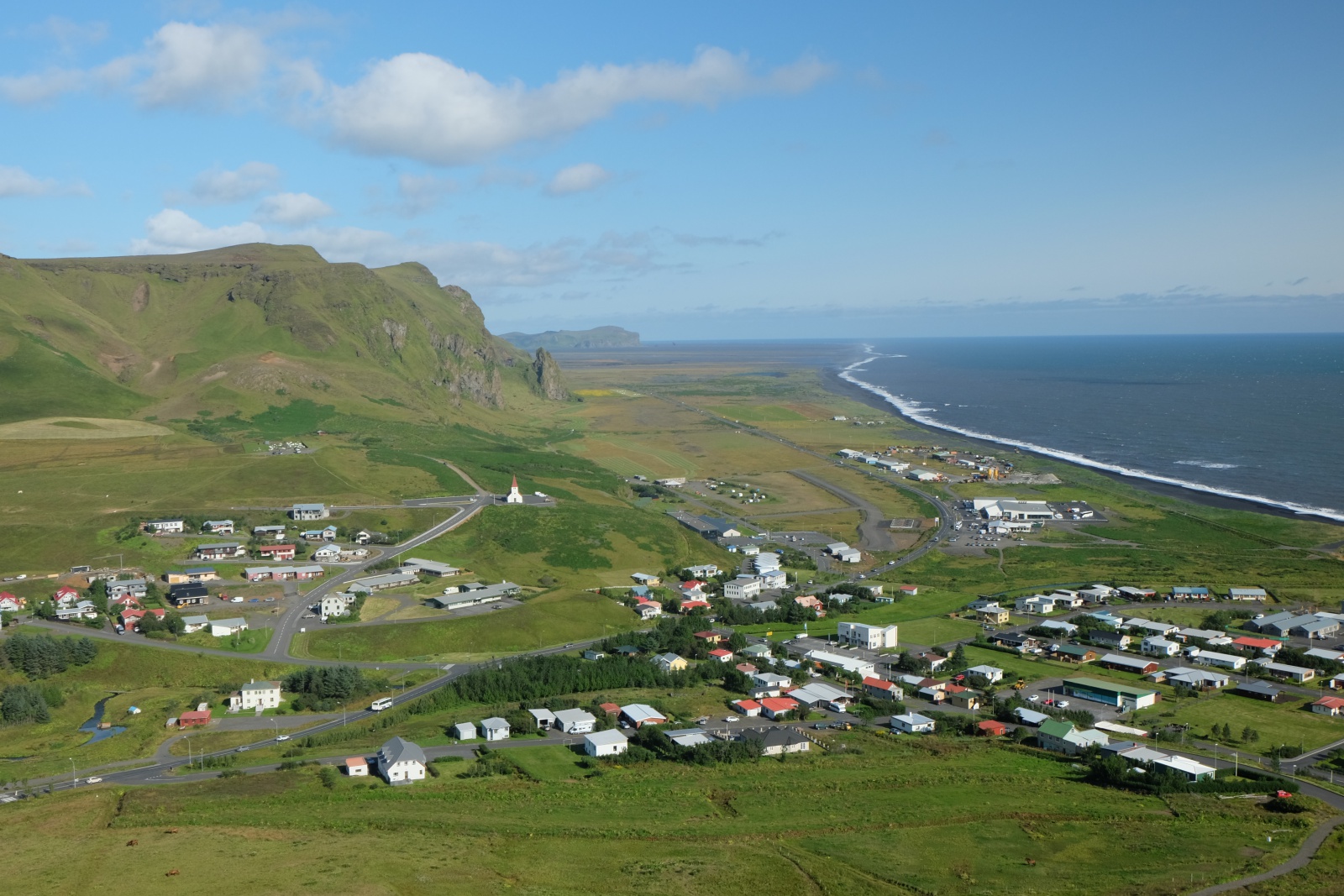 Taking the bus through south Iceland

We have to say: Iceland is made for traveling by car. Taking the bus is possible, but it’s complicated and you need more time. And some places are just off limits then. And roadside stops at scenic places, too.

We nevertheless gave it a trial. Only for a couple of days, in order to get the fastest possible way from West to East Iceland. We had planned a stop in Vik for two nights, on probably the country’s most picturesque campsite, and one night in Höfn (pronounced „hup“, or something like that).

So our first leg of that journey was Reykjavik – Vik. You can choose from multiple companies, we chose the public transport long distance busses run by Straeto, that were 1900 Kroner cheaper than the more fancier Sterna or Reykjavic Excursion busses. They have wifi, too, but are low on electricity. Just two seats had plugs for charging the phone, luckily for us we got one.

It’s actually quite nice to get driven around, without having to worry about getting dents from stones in your rental car. You can just watch the beautiful scenery pass by. The downside is, you can’t stop to take pictures. You have to take them out of the moving vehicle.

It took us roundabout three hours to get to Vik. We arrived quite late, past 8 pm, so the campsite was already quite crowded. But we found a place to squeeze in our tent. Time to say a few words about camping in Iceland. Well, it’s cheap. That’s the reason we did it quite extensively. The facilities are often run down, kind of improvised or in the worst case just crappy. And always too few of everything. Vik was a perfect example of that. There were laundry facilities, something we didn’t see a lot on campsites and were desperately looking forward to. „Laundry facilities“ here meant one (1!) washing machine and one dryer for the everyone. We got in line and got to do our laundry around 2 in the morning. On the bright side, we got to see northern lights while waiting, which was really beautiful! By 4 o’clock in the morning, we had finally finished doing our laudry…

Well, good thing we didn’t have to get up and packed the next day, so we slept in, had a late shower when all the others had already gone (which meant a cold shower, since all the warm water from the boiler had been used up) and even found chairs to sit on in the common area where we had our breakfast. (As I mentioned, too few of everything – the common area got crazy crowded in the the evening and morning). We also got to do another load of laundry.

We did a nice hike up some cliffs in the late afternoon and were rewarded with beautiful views on the villiage and the sea.

More pictures in the album at the end.

The next evening the campsite didn’t fill up like the night before, our tent somehow remained awkwardly alone. Well, good for us, so no one would stumble over our tent pegs.

The next day after another really cold and windy night we had to catch our bus around noon, so we had plenty of time to get up, have breakfast and pack.

The next leg of our journey was to Höfn. The route was even more scenic than the previous one, since we drove along some main attractions of South Iceland – Vatnajökull National Park with Iceland’s largest glacier and the famous glacier lagoon, where icebergs float around. We would love to have stopped a while, but this is the downside of bus travelling – you can’t. They could at least have stoped for 15 to 20 min… nope… So it’s down to getting out of the bus for a short stop, 5 minutes while the driver has a smoke, and shooting through the window…

After a four hour drive we arrived in Höfn. The only reason to stop here, is because you have to change busses to get to Egilsstadir, the main traffic hub of the East. And the bus starts early in the morning, so you can’t get around spending a night here. The campsite is quite expensive and not covered by the campcard. But the facilities were at least clean, though again too few (one shower for women, one for men – how is that going to work out?)

This was going to be our last night camping, after a week I was clearly fed up and had already booked a farmstay, an AirBnB and a hostel for our time exploring the East. Since we were looking forward to another pretty cold and stormy night we decided to treat ourselves for a nice meal at least. At the harbour of Höfn we found a cute little pizza place, where they had wonderful pizza with lobster. We paid a fortune, as usual in Iceland (50 Euros for two pizzas, that’s without drinks!) but to be fair,  it was really delicious. And it had lobster on it.

Our bus to Egilsstadir left at 8 in the morning, so we had to get up early. Since we usually didn’t sleep too well these cold nights, this wasn’t a big deal for us. Unfortunately, Streato doesn’t serve this route, so we chose Sterna. Which was the wrong choice, the bus was tiny, no wifi or electric plugs for our phones. Well, whatever, we were just glad our camping adventure was over and were looking forward to becoming independent with our own rental car again!

Iceland is one of the most expensive coutries to travel.

It is possible to travel Iceland by bus. But it’s not convenient nor is it comfortable, and you need to plan in a lot more time. The perfect way to travel south Iceland is still by road trip.

Campsites are cheap, but after a week the lack of facilities and the bad state they are in start to get annoying and end of August it starts getting really cold at night, we ended up buying some really expensive but insanely warm socks made of Icelandic wool …

To be fair, we should mention that new facilities were being built while we were there.