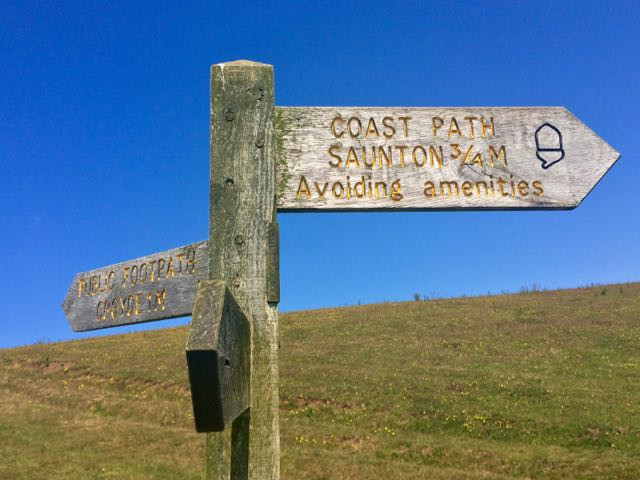 We’ve said Goodbye to Cornwall and to our last fellow walker, Dennis, in Bude and got on a bus that brought us to Clovelly in North Devon. Clovelly is a peculiar little village. The first town I’ve been to where I had to pay an entrance fee. It’s been conserved beautifully, with cobbled streets and century old buildings. The streets are so steep, that they can’t be used by cars, so everything has to be brought there with sleys. In the past, they also used donkeys for that, they still keep the animals around, as a tourist attraction. So is everything else in Clovelly. It’s pretty much crowded by tourists.

Another interesting aspect of Clovelly is, that the whole village, roundabout 80 buildings, is owned by just one family. So everyone who lives there is renting the house. We asked the waitress in the pub, how you can become a member of the Clovelly community. Depending on what you were looking for you could be on a waiting list for a few weeks up to a year or longer, she explained to us. A secluded community, quite exclusive, and under the ownership of one patron family – I think, this is the perfect location for a Stephen-King-like horror story.

We had a look around and lunch in one of the pubs, then made our way back up. Where it started raining, again, so we hopped on the next bus that brought us to Bideford. Originally, we wanted to walk a bit and find a campsite to stay on. I don’t know what went wrong, but instead we ended up in a hotel, the „Royal Hotel“ in Bideford, in a superior room. Well, we got a bargain, saved 50 bucks on the room, and breakfast was included. For a room in the Inn we’ve enquired earlier we would have paid the same price. It was a great place, I haven’t slept that well since we’ve started our walking tour. But we felt slightly out of place, when we entered the magnificent breakfast room in our hiking gear the next morning.

The next day it wasn’t raining anymore, but it was quite cold and windy. But we really couldn’t justify taking any more busses, so we started walking to Barnstaple. The path followed the Tarka Trail, built on former railway tracks. So it was an easy, level walk. We arrived Barnstaple around noon and decided to walk on. So we walked all the way to Lobb, past Brauton. We hiked roundabout 30 kilometers. And this time, we actually went to a campground. In the meantime, the sky had cleared and the sun was actually shining.

The next day was bus-free, too. We went to Woolacombe along the coast path, in perfect sunshine. Woolacombe beach is apparently been voted number one beach in the UK. Also, number 4 in Europe and number 13 in the whole world. So we were told by signposts at the town’s entrance. And yes, the beach is broad and long. Very long. We found another campground to stay on, the Woolacomb Sand Holiday park. It was a huge site, with indoor and outdoor pools, a shop and a bar. We went to the bar in the evening for dinner and to charge our phones there. They were just to start a game of Bingo when we came in. I think there is nothing more depressing than Bingo. „Seven and two – seventytwo. Four and five – Fourtyfive. All the twos – twentytwo…“ so the game master. „Quack-quack“ replied the audience to the „twentytwo“ (apparently that’s Bingo-etiquette, Henry explained). Bingo is like looking into your future, when you’re old and sitting in a nursing home. Because that’s where Bingo is usually played, isn’t it? Here, at Woolacombe Sand Holiday Park, they tried making kind of a show of it. When number one was called, „all by itself, number one“, so the announcer. Then one of the bartenders started to sing „All by myse-eelf, don’t wanna be, all by myself anymooooooooore“, the last word especially loud and slightly off-key. What a strange experience…

The next morning started with strong winds, but sunny. So we walked on to Ilfracombe, again on the Tarka Trail, the former railway network. A nice level walk. We walked through Ilfracombe to Hele Bay, where we found the next campground. This time we hooked our tent up to electricity (well, not the tent, but our devices…), and we’ve got decent wifi (finally).

Three nights of camping in a row, roundabout 50 kilometers of hiking – all in all I’m pretty proud of us.

Here are some pictures: