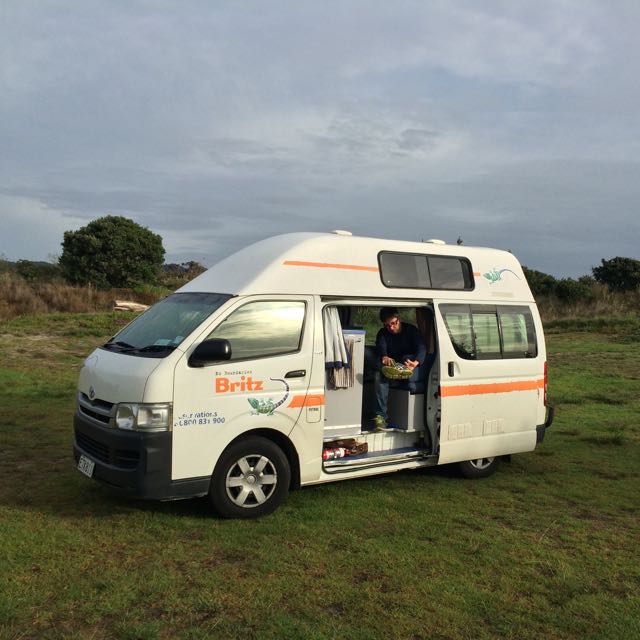 For three weeks we’ve been living in and out of this van. I was not really sad when we gave it back – the roof leaked water, the lights didn’t work reliably and overall it was in rather poor shape. But it got us around. And at least we got a 200 Dollar refund when we gave it back and complained about it.

When I heard myself saying “It’s a great place, and only a five minutes drive to the next public shower…” it just sounded wrong. I don’t want to drive to my shower. I don’t want to get on shoes and warm clothes when I go to the bathroom in the morning. Or having to use the toaster for heating. I guess I am just not the camper type. Well, I still have to admit, this way of traveling gets you to some pretty nice/interesting places. Here’s a selection of my most memorable:

Found it with the Campermate App when we were looking for a place to stay on our way from Wellington to Napier. The app said it was free, but you needed a permit to stay. So we called the number the app gave us. The lady at the other side just recorded some basic infos like number plate, name and country of origin and told us we were good to go. When we came closer to our destination, we got some doubts about it – there were hardly any houses on the way, definitely more sheep than people. We arrived literally at the end of the road, right by the sea. There were a few houses around, and the campsite was just off the beach. But we were the only ones there. Just one other camper van was around, and he was about to leave. Just waived us goodbye, and we were on our own. Literally. Never had this before, we were used to pretty busy free campsites, where you had to arrive early to secure your spot. We remained to be the only ones the whole night. It was nice, the ocean’s waves you could hear in the background reminded me of Fiji. The next morning we woke up early and witnessed a beautiful sunrise over the sea. On the downside, we had to drive 90 kilometers to our shower in Napier.

A free site close to Stratford, with a strange vibe. It’s basically a big meadow surrounded by trees. In the middle there is a white monument, a memorial for a battle some 150 years ago. Is it just me or is there something strange about putting a campsite on a former battlefield?

Not exactly free, but only 10 bucks per person and night, a bargain in Northland, near Waipu. We stayed two nights on this spacious site, again next to the beach. They had showers, but only cold ones, and no roofs. Which was annoying, since it started raining as soon as we finished showering. How are you supposed to dry? Still, it was a beautiful place, busy but not crowded.

We spent a total of three nights on this beautifully located spot in Taupo, two on our way south and one on the way back north. It’s right at the riverside, but still very close to the town center, so it’s probably the most convenient free campsite we’ve stayed on. It gets quite busy, but it’s also quite big, so you don’t have to be there too early to get a spot. Plus, you get to see a lot of nicely decorated vans.

We were running late and didn’t get a spot on the free site we found. So we drove further and found this Holiday park close to Miranda Hot Springs, which was certainly the most expensive one we stayed on (50 Dollars a night), but also the most luxurious (well, if you think there’s anything luxurious about camping anyway..). They had a big natural hot pool, very relaxing. All the facilities were spotlessly clean, there was a spacious kitchen, hot showers… In the end I was really glad the free site was full and we got here. Also, we finally met some people from New Zealand, which seemed to be an exception on most other campsites – there’s usually a 75 percent chance your neighbors are German, too. Nowhere else have we met so many travelers from Germany.