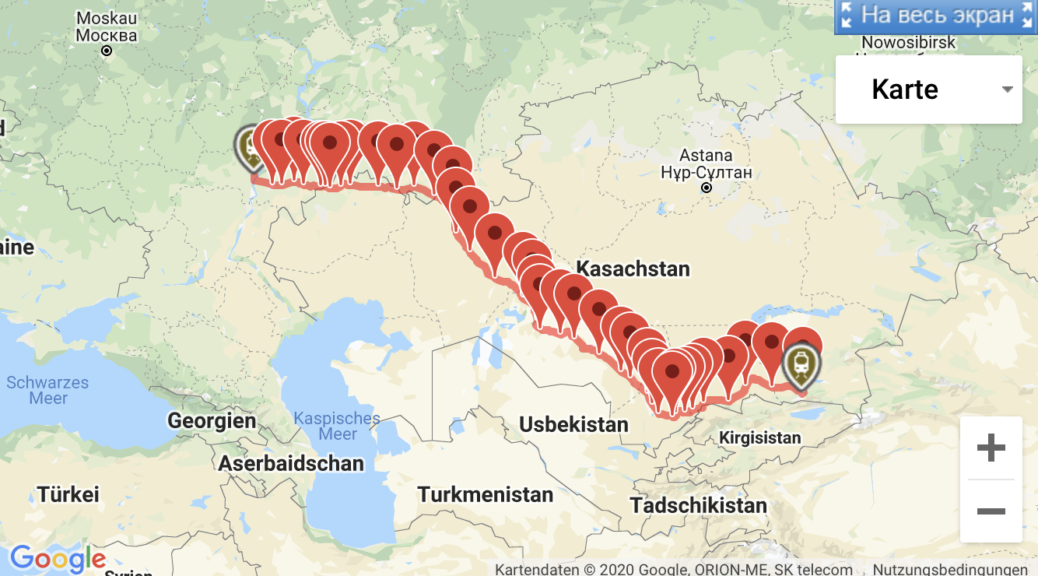 Long journey, long post, so for those readers only after useful information first things first: If you are considering this trip you’re probably asking yourself the visa-question. The answer is: No, you don’t need a double-entry Visa for Russia, even though the train meanders between the borders and goes back to Russia for a short time after it has already passed the border to Kazakhstan. A single-entry Visa is absolutely fine.

We were confronted with the first border controls shortly before midnight of our first night on the train and got our exit stamp on the Russian Visa. The train stopped 1,5 hours for that. After that and a short ride it stopped for another hour, when we got our entry stamps for Kazakhstan. They scanned our passports and asked about our travel plans. With the help of Google Translate, apparently not many non-Russians or – Kazakhs travel this border, we were asked where we were headed, what we worked, if we had any family in Kazakhstan, just the standard questions to make sure we weren’t coming to stay.

They checked the compartment, and had a dog sniffing for drugs or bombs or whatever (btw, the cutest dog I’ve ever seen on this job, a black and white cocker spaniel-like), but we didn’t have to empty our bags, so it was easy going, all things considered…. We were told we could stay for 30 days visa-free, which complies with the information I got from the Internet for British citizens. According to this info Germans can actually stay up to 90 days, but they didn’t say that and I didn’t ask, since 30 days were more than enough for us.

The next morning I woke up quite late, around 10:30 or so, and we were back in Russia (back to mobile Internet connection! :) ). So there had apparently been no entry procedures whatsoever to get back in. However, when we entered Kazakhstan again, border patrol checked the train and the compartments again, and again a dog was running through the corridor. We were again asked about our travel, but less questions than the first time, which was probably because typing all the questions in Google Translate was too much bother for our border officer. He also wasn’t interested in seeing our passports again. I didn’t mind. So again, easy going, just a bit time-consuming.

So that’s the positive thing of this journey. Now to the train itself…

It’s an old train. Really, really, really old. On the plus side, I prefer the old berths in the kupe to the ones in the Talgo type trains. There seems to be more space for luggage, too, than on the Talgo. That’s it. The bathroom, well, is not nice. To be euphemistic. There is no bistro or restaurant wagon, but I guess you could buy some snacks from the Provodnik. That’s at least what a menu in our compartment suggested. We had stacked a few snacks, so we didn’t put this to a test.

Most important: There is a samowar at the end of the wagon providing hot water for our tea and convenience potato mash. It was coal-fired, so the diesel-smell in the compartments from the locomotive engine was at times, when the samowar was fired up, joined by the burnt coal-smell.

The first night we had the compartment completely to ourselves, I was quite thankful for that. In Aktöbe, just after the second border crossing around noon of the second day, a Kazakh joined us, who couldn’t speak any English. But he seemed nice and we learned a few words Kazahk from him, which I have already forgotten. BTW, Aktöbe is a good stop to stack up your supplies of drinks, snacks, toilet-paper or whatever you need. There is a super-market right on the platform, where you can pay with Roubles (but not with credit cards) and the train stops here for 40 minutes, so plenty of time to wander around.

The second day was kind of bad for me, I woke up and already felt somewhat dizzy, and later, in the afternoon developed a bad migrane. Also I felt a bit feverish, so this was probably the worst time for me on the train.

I guess it was from the stress of the first night, the border procedures, the insecurity whether our single-entry Russian Visa would be sufficient… After taking some pain relief pills  in the evening I kind of fell into a light sleep from which I woke quite often. In Toretam, around 6 in the morning of the third day, we were joined by a woman, so our compartment was now fully occupied.

After that I could not really sleep again. So I got up and out into the corridor for some „fresh“ier air. At least I felt a lot better than the evening  before, the headaches were gone and I actually felt kind of awake. I watched a beautiful sunset and was one of the first to get into the bathroom to brush my teeth and freshen up (as far as that’s possible).

The morning then was quite nice. We got to know our new travel companion, Xenia from Baikonur, the „star city“, a kazakh city that Russia rented for their space travel programme. She spoke quite good English, so we could have nice conversations. She was also headed to Almaty, for a 10 day vacation. She had been there several times before and gave us some tips what to see (Park of the 28 Guardians, Kok Tobe) and what to eat (Sashlik from Lamb, Manti – similar to Georgian Khinkali).

I think this was about the time we kind of accepted and came to terms with our situation. Nothing really bothered us any more, not the lack of privacy, nor the smell, not even the sanitary situation really got to us. Time also didn’t really exist anymore. A steady change of soothing rocking movements of the train and nice 20-minute-stops to have a walk at another station platform with little stalls selling snacks and women walking around selling Sashliks or Manti. On the train it’s mostly drinking tea, eating snacks or convenience potato mash (just add hot water), sleeping, looking out of the window – and repeat. It’s like a deep acceptance that Train 008, Wagon 8, Compartment III and berths 11 and 12 were our homes for this moment.  We spent most of day three in this state of being one with the train and the journey.

At some point on the third day Henry pointed out, that they had put a hook in the compartment’s ceiling, „maybe to hang yourself ?“. Well, we were beyound that.

The Kazakh guy left us in Kyzylorda, and one station later Xenia, Henry and I are like some sworn community and the compartment our kingdom. Xenia is a real train-travel-Pro, she as all kinds of snacks and real food: chocolate, bread, meat, tomatoes (from Usbekistan, really tasty!), fruit (bananas, apples, oranges), porridge, an assortment of sweets, also tea, coffee, milk and sugar. Enough to feed the whole wagon probably, and she is more than happy to share with us. We in turn can help her out with a blunt knife and share the Preiniki I had bought in Aktöbe.

On our third day on the train we kind of passed through all seasons. While in the more northern part of Kazakhstan there was quite a lot of snow, it got less and less the further we travelled south. At Turkistan there was no snow at all and it felt almost like spring. In Shymkent it finally was spring. Even the ever-same landscape changed from flat steppe to rolling hills. The mood also got better with every mile we got closer to Almaty.

Up to Shymkent. We arrive there around sunset on the third day, and a million people suddenly swarm from the platform into the train. We all hope no one will join us for the last night. We fake coughs and speak what we think might be chinese words (no, not politically correct, I’m aware…) to make people afreaid of the Corona Virus. We feel lucky for quite a while but in the end a boy of maybe 16 or 17 joins our compartment. We all think the same, maybe in different languages: Frak! He was with a group of boys that got their seats scattered around the wagon, so he spent most of the time elsewhere. We were quite fine with that.

However, starting from Turkistan a dozens traveling hawkers had also boarded the train, so every two minutes someone would come in and try to sell us some Kazakh newspapers, clothes, jewellry, snacks, table cloth, watches, gadges…. and they didn’t ask us once, no each one probably passed us three times. Xenia, the travel-pro, knew how to tell them off, luckily.

The last night I didn’t sleep very well. The next (and last) morning we first didn’t speak much, we were all quite exhausted from the journey. We got packed and tidied our compartment, brought our linen back to the provodnik. Outside, the snow had come back. We saw a couple of horses („Food“ for Kazakhs, as Xenia explained). It was also quite foggy, so at times it seemed like the outside was just an endless white space.

I think the last two hours were the longest ones I have ever experienced. It was like the train slowed down in a last try to completely break us. But then – there was suddenly Alamty II, modern and huge and we were back in our times, spot-on at 10:05 AM. Not a minute late. Impressive, considering the 3000-somewhat kilometers and the two border crossings. Take that, Deutsche Bahn!!