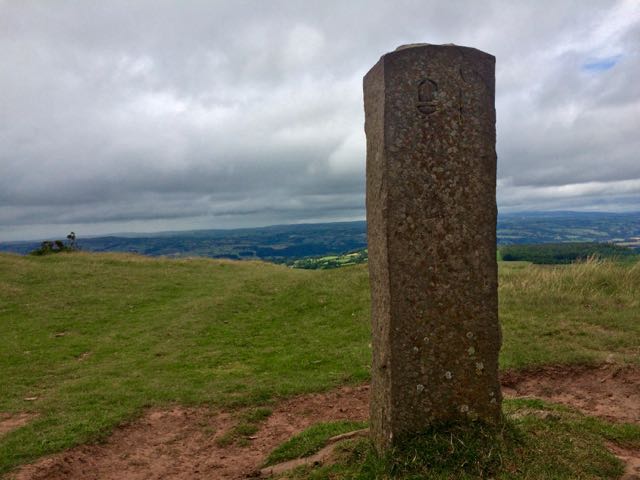 For me, this was definitely the best stretch of the Offa’s Dyke Path. Despite the weather, the hardship, the scarce landscape. Or maybe because of these apects.

Our Guidebook had warned us that the upcoming hike across the Black Mountains should not be undertaken lightly in bad weather conditions. The ascent was supposed to be steep and long, and the mountain scenery scarce and harsh. If conditions were to worsen on the ridge, there were only two possibilities to get off the mountains between Pandy and Hay-on-wye: Llanthony to the west and Longtown to the east, both more or less right in the middle of the way.

Allen, the innkeeper of the Old Pandy Inn, where we spent the night before that hike however told us, not to descend the mountains, once we had reached the ridge. The walk down and up again would take longer than just continuing on to Hay-on-wye. And once you’ve completed the exhausting ascent, the path was quite level, with a gentle descent into Hay-on-wye.

The next morning didn’t look good. It was grey, foggy, the forecast announced rain around noon. We started walking anyway. The ascent was like we expected: steep and exhausting. After all we had to climb more than 700 meters in altitude, the highest point of the whole Path was on this stretch. It took us one and a half hours to get up to the ridge. But once we had mastered that, we were rewarded by magnificent views. Not. We walked into a white wall of fog. Couldn’t see any further than five feet. 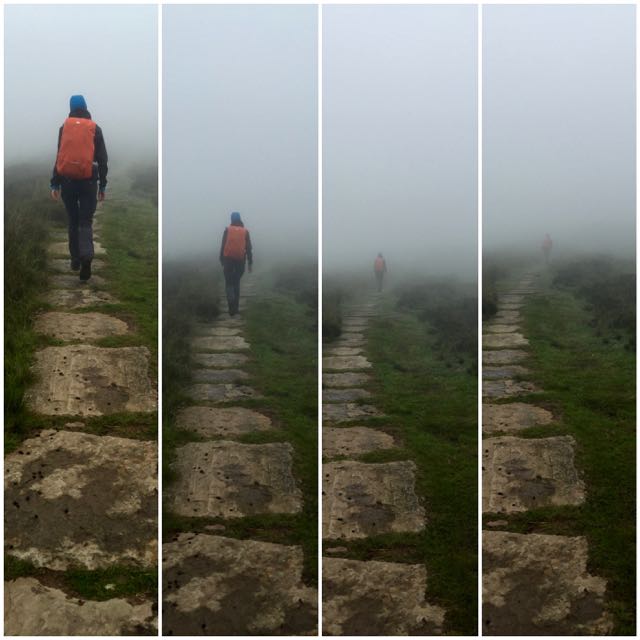 Worse, after an hour or so, the fog got accompanied by very strong winds from the west, lashing the humidity of the fog as raindrops against us. Ususally I get quite upset when the faintest drizzle of rain comes down on us while we are walking, but not this time. Strangely, the weather didn’t bother me at all, although there was no shelter, since the landscape really was scarce and moor-like. Every now and then the contours of sheep and semi-feral Welsh Mountain Ponies would appear in front of us. They would have a short glance at us and then return to whatever they were doing – mostly feeding on the short grass or wander off back into the white nothing around us. It was quite meditative, with not a lot to look at around us, trotting along the path, which seemingly ended five feet in front of us. Not knowing, if a steep ascent awaited us in the next couple of yards or where it would take us. Really quite a different experience. 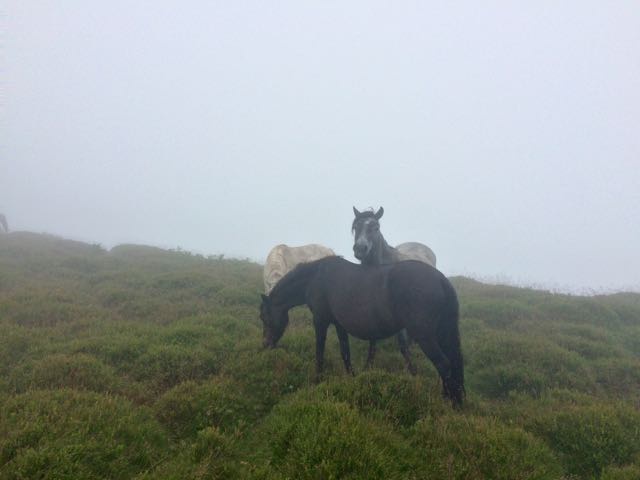 In the early afternoon however, the sky cleared and we saw that there was still a world around us – fields, forests, mountains, and a lot more ponies:

We descended the ridge in sunshine, though it was still quite windy and arrived in Hay-on-wye under a bright shining sun, after seven hours of walking.