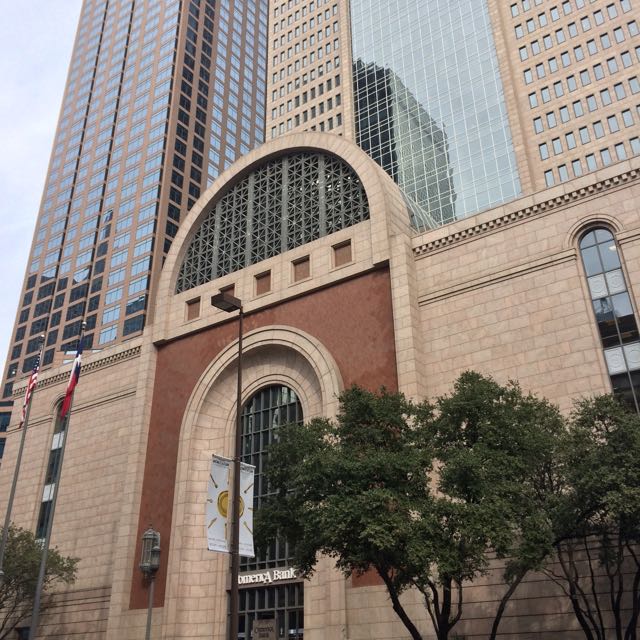 Texas weather had pretty much messed up our plans, so we did not nearly see as much of the region like we had planned to. We took a closer look at downtown Dallas while we had to wait for our bus to Albuquerque on Tuesday. Which was then cancelled, as they told us one hour before the scheduled departure. But that’s a different story…

If Texas cities were people, Austin would be a hippie and Dallas would be a businessman. At least Downtown. After a closer look you notice some contrasts though: Huge skyscrapers made of steel and glass stand right next to nice historic buildings. There are a lot of banks and Insurance companies with expensive looking restaurants in the neighborhood, where their employees head for lunch. Then there is also the Pioneer Plaza with it’s statues of Cowboys and Texas Longhorns. And the old Pioneer Cemetery, also a reminder of the city’s origin before it was all oil and “Dallas”.

And of course, there’s the JFK memorial which we went to see. There we met a conspiracy theorist who got us caught up in a conversation about how the real truth about the assassination will never come out and then, when she found out we were from Germany, wanted to discuss Hitler’s plans in Antarctica and his possible connections to Aliens… Really, a walking cliché! When a homeless joined us asking for money, she disappeared quickly. We were really thankful he got us out of our predicament, so we gave him a few bucks.