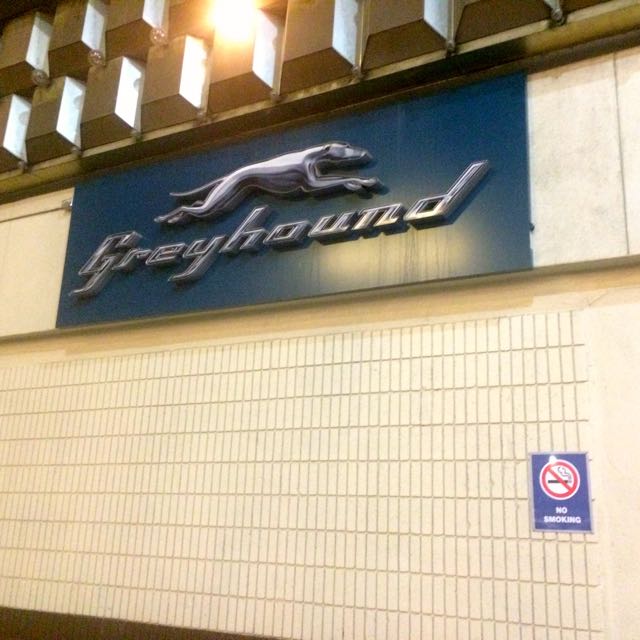 we are sorry to tell you this – but we have to break up with you. You have been a (mostly) reliable companion for 3,687 miles (or 5,933 kilometers) from the eastcoast to the westcoast. You took us on eight journeys, four overnight and four during the daytime. We spent 81 hours and 25 minutes in 14 of your busses and 14 different stations of yours. You clearly taught us, how big the United States are: our longest ride was 16 hours, from Savannah to New Orleans, and our shortest still took four hours, from Austin to Dallas.

Our relationship has not always been easy, many friends and people we met on our journeys did not understand why we would choose to travel with you. In the USA the car is usually the travel option you are expected to go with. An Airbnb-host even cancelled our reservation when we told her we came on one of your busses. “It is mandatory to have a car” were the only words we received from her after enquiring how to get to her by public transport. A day later Airbnb contacted me offering assistance with finding a new accommodation. But this blatant rejection was an exception, luckily. Sometimes, people would just look at us funny or make some sort of funny comment. The owner of the hat shop in Albuquerque, where Henry got his Stetson hat, jokingly offered us his gun, when we told him about our journey. “Greyhound? Then you’re probably gonna need this. There are some crazy people going on that bus…” he laughed and got out his colt like he wanted to hand it over to us.

And it is fair to say, there are some strange folks traveling with you. In the beginning, we were pretty amused about signs stating that shoes and shirt are required for service. But we did see some – lets say interesting – people. There was this guy that was just screaming and shouting and cursing around in Jacksonville station. Then there was this guy sitting behind us on the bus to Savannah, telling his seat neighbor that he just got out of jail, where he spent his time for violent assault for breaking another guy’s arm. He also explained, he did that while preventing that guy from raping a woman, so I didn’t feel too worried. Then there was this woman on the overnight ride to Albuquerque, who suddenly – at two in the morning – started shouting her seat neighbor had stolen 250 dollars from her. When the bus driver could not really do anything about it, she threatened to knock that guy’s head over with a bottle. When she then got up and started moving towards the driver, another woman, short and compact, maybe around 45 years, stood up and blocked her way, telling her she won’t let her hit anyone and certainly not the driver. At our next break the police was already waiting, questioning her and several guys that sat close to her. But no one got arrested, everyone got just back on the bus – and at least it was quiet for rest of the ride. The funny thing is, that most people who looked kind of scary – for example with tattoos all over them, even the face (I have never before seen so many people with face tattoos…), turned out to be very polite and nice fellows. The ones that caused trouble usually appeared quite unimposing. Speaking of tattoos: On our last journey, waiting for our very last bus in Las Vegas, I realized it was the right decision to replace you by a car. We saw that older guy with that big fat swastika tattooed on his neck, sitting behind us in the waiting area. I’ve seen signs in restaurants claiming the right to refuse any costumer – this guy was certainly a good reason for having this policy. So why don’t you, dear Greyhound?

Well, we know you can’t really be held responsible for your costumers. But you can do something about your own staff. We have regularly been disciplined by your security just for standing somewhere. You are literally only allowed to sit down in the designated waiting area or stand in line in front of the ticket counter. Everywhere else the security will shoo you away. It sucks to be treated this way, I can tell you. And it was especially annoying in Dallas, where the station was packed with people who were stranded there due to cancelled busses and the status of our bus was still pending. Your drivers on the other hand were mostly nice. Sometimes really entertaining. Only once have we witnessed a bad incident: In Jacksonville a guy with a dog, a Golden Retriever, was waiting with us for his bus. The dog was nice, a service dog, but it got excited a bit and wanted to play, barking a little bit. Not really barking, more like talking, like dogs sometimes do, when they get excited. The bus driver heard that, got in and told that guy in a very harsh tone he wouldn’t get on the bus if he did not have control over his dog. The dog wagged his tail, it was absolutely clear to everyone else in that room, that it posed no threat at all. Just the driver made a big fuss. In the end, the guy was let on the bus with his dog, but still, that fuss was completely unnecessary. For a company with a dog as your corporate symbol, you could have shown a bit more empathy.

Also, you could do something about the state of some of your busses. We’ve travelled in some that felt like they nearly fell apart and smelled really bad. A little bit more maintenance would improve the travel experience quite a bit.

When I researched online the best travel options from one place to the next, I frequently stumbled upon warnings not to go with you. Among other reasons also because of the sometimes shady places where you put your stations. Which we can confirm, at least partly. Your Miami bus station for example is located in an industrial area, not many people to be seen on the street. We were happy we had to go there during the daytime, it didn’t appear like an area where you want to wander around at night. We nearly couldn’t find it, you hid your sign pretty well. The station consisted of one waiting room and a ticket counter, both obviously had seen better days. A couple of people were waiting inside. To the backside, there were a small outside smoking area and the bus bays. When the bus arrived, there was no line, we just put in our backpacks in the luggage compartment, gave the driver our tickets and went inside. In retrospective I must say, this was not very representative. Usually, you organize your stations quite well, with clearly marked waiting areas, little restaurants where you can get more or less decent snacks, and a line of people forming in front of the doors to the busses, that won’t open until the bus is ready for boarding. Almost like an airport. And many stations were actually quite conveniently located: Savannah, New Orleans, Albuquerque, Las Vegas and Los Angeles are examples of nice stations close to the local busses and the city center. Flagstaff, Austin and Miami on the other hand are not. And your Sarasota station is a joke. Just a counter in the middle of what looks like a Caribbean restaurant under construction, next to a gas station in some suburb with bad public transport connections to the city center, you’re kidding, right?

We have mixed feelings about the service you provided us. You cancelled one bus on us, in Dallas, because of a winter storm. You could have communicated about that better, we only learned about that two hours before the scheduled departure. And we had no choice but go to your station before, because it was impossible to get any useful information from your website or the phone number you provided with your service alerts. You could certainly work on that. Apart from that, we had a few other delays. In Albuquerque for example our bus was nearly three hours late and again there was nearly no communication. But compared to other passengers we were lucky – there were people that had been waiting since midnight, and it was already ten in the morning! So I feel lucky, we never got into a mess like that.

Well, in the end, you gave us some unique experiences we wouldn’t want to miss. But now it’s time to move on. There are some places we want to go, where you can’t take us – Death Valley for example, or Yosemite National Park. But we will certainly remember you!