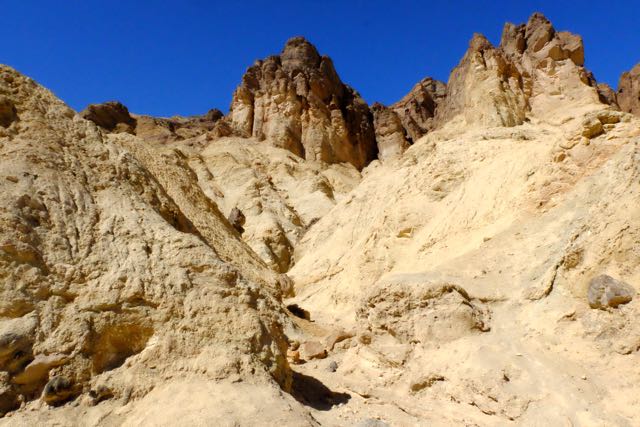 We wanted sun and heat  – so where else to go but the hottest place on earth? It was over 30° Celsius in Death Valley, but felt a lot hotter. And this was still winter – in summer it gets easily over 40° Celsius. The highest temperature recorded was 56.7° Celsius. This is definitely one of the places on this planet, where nature is still undisputedly the boss…

The ride to Death Valley itself is also quite an attraction. The night before our visit in the Valley we stayed in a place called “Rustic Oasis Motel” in Olancha. This is what I would call the middle of nowhere. The next neighbor must have been a few miles away. It was nice, though. It had a fireplace and you could play Horseshoes! Which we did, of course.

In Death Valley we hiked the Golden Canyon, had a look and a walk (a very short one, due to the temperatures) in Badwater Basin, the lowest point in Northern America and hiked through the Natural Bridge Canyon. On the way back we drove through the “Artist’s Drive”, a very scenic byway.

We had planned to head further north after our visit in Death Valley and enter Yosemite National Park on Highway 120, over the Tioga Pass. We learned in Death Valley, that they closed this road in winter (which means up to May or June). So after a night in Bishop, which is a beautiful small mountain-town, we drove back south on the Highway 395. Which wasn’t a bad thing. This road itself is definitely worth a trip, it’s absolutely stunning landscape and nearly no one else around.