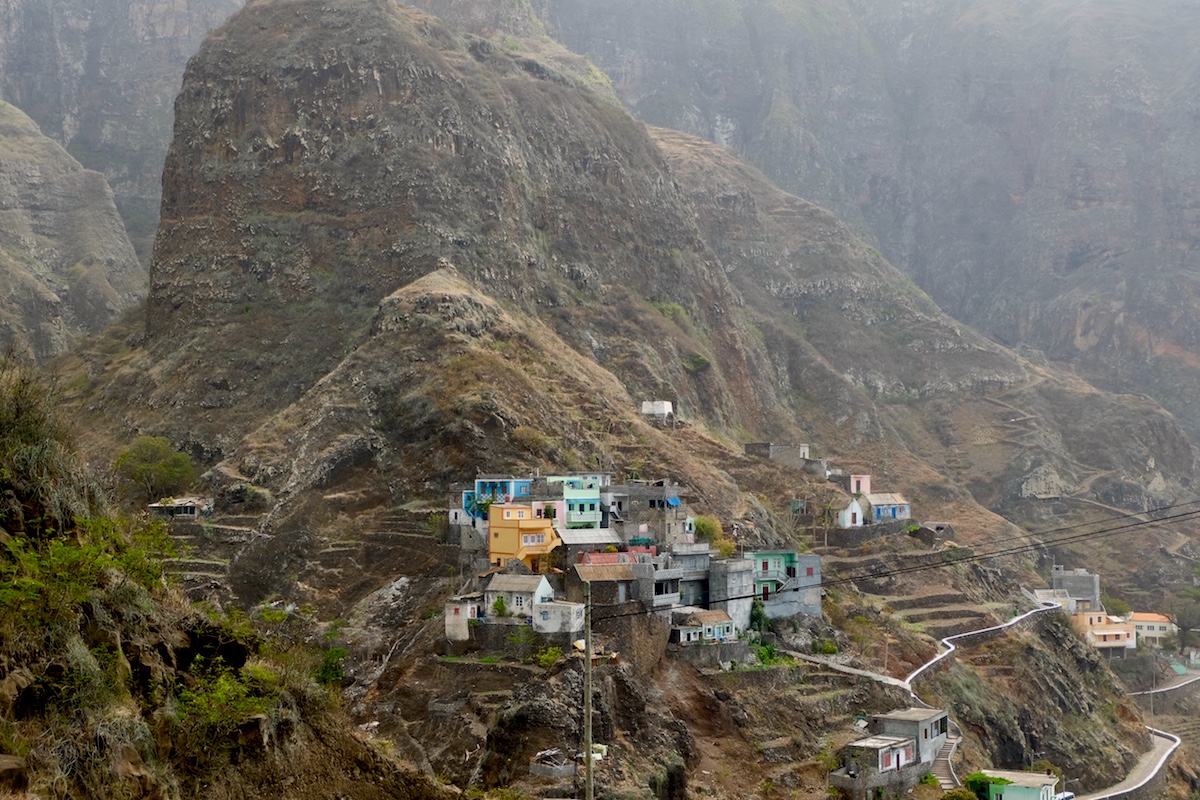 This is a classic. Well, the official long version of this hike anyway, which extends between Ponta do Sol and the village Cha d’Igreja. It’s quite a long walk, for the most part unprotected from the brutal sun. We didn’t feel so well, so we decided to start walking in Ponta do Sol and see how far we get and then just turn around. The coastal walk is a nice change after all the Ribeiras we’ve seen. The landscape is very different, much more desolate, but therefore also more dramatic. The furious Atlantic ocean contributes the soundtrack to this hike.

The undoubtable highlight of this walk is the hamlet of Fontainhas, a little village where the houses spectacularly cling to the mountain cliffs. If you want to shorten the hike a bit, you can take an Aluguer from Ponta so Sol up to the village.

After that the hiker awaits an ascent up a mountain ridge, where you are rewarded for your efforts with a great view all the way back to Ponta do Sol.

The following descent down to the cute village Corvo is quite steep. Corvo is perched into a narrow ribeira, and the only place we’ve been to on Santo Antao where we didn’t have any mobile phone reception.

That’s as far as we got. And we only made it down there because we could see the promising „Cold drinks“ written on the top of two of the houses from above.

We granted us a long break at the little place on the left hand side of the street. No english spoken, luckily Henry speaks enough Portugese to communicate in most situations. We sat on the patio, looking at the farming terraces and a donkey on a tiny terrace opposite of us. We could smell something being cooked inside the kitchen, quite mouth-watering. Our host came out with a grilled fish, and offered it to me for free, how nice of her. She probably thougth I could use a bit to eat. Did we look so exhausted? Well, I have to say it was the best fish I’ve had on Santo Antao, so aromatic. But maybe I just really was that hungry and exhausted…

We couldn’t stay there forever, though I really felt like it, so we started the gruesome ascent up the ridge again. There along the way there were 14 little shrines with the different stations of Christ’s ordeal, which we found quite appropriate. We took a short break at each one of them and finally made it up.

I kind of regret that we didn’t walk the whole way. But it would have been quite hard, especially since we both fougth some tropical germs. If you do it, you should organise your transport back from Cha d’Igreja in advance. Our accomodation can certainly help with that. Or try to catch an Aluguer from Ribeira Grande to Cha d’Igreja and walk in the other direction back to Ponta do Sol. But you’ll probably end up with a taxi, since aluguers to and from the more remote place usually have a schedule that’s not helpful for hikes. (Leaving village for the town in the morning and returning in the early afternoon).