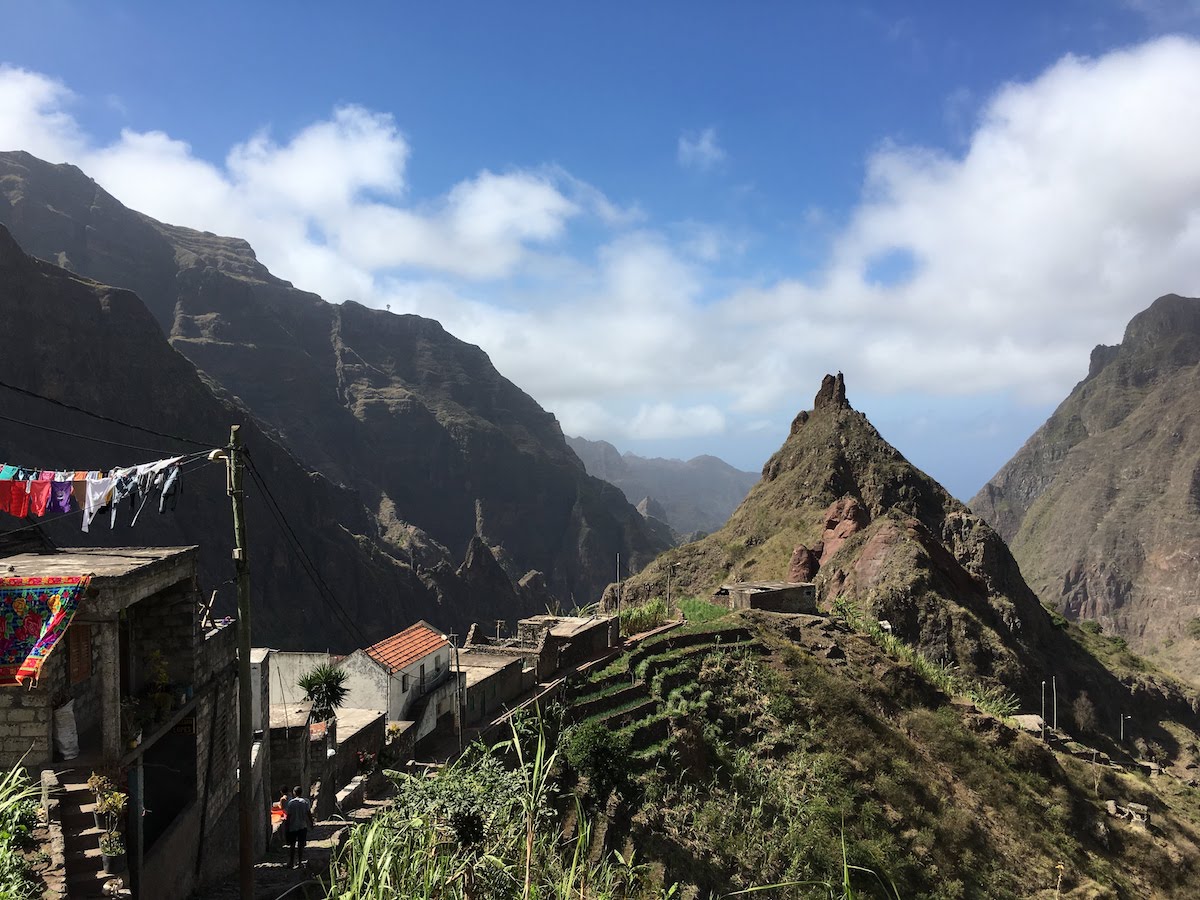 If I had to choose a favorite hike in Cape Verde it would be a tough decision  between this one and the Pico d’Antonio one. It’s a spectacular descent (you coud walk the other way round, up, if you’re mad enough), you pass through breezy pine forests, the clouds, a marvellous mountain village and finally get to the bottom of Ribeira de Torre. This ribeira is many peoples’ favorite, and I can see why. The peaks around look absolutely dramatic.

We took a taxi straigth from Ponta do Sol to our starting point, the village Agua das Caldeira, nearly 1300 meters above sea level. You could try to catch an aluguer from Ribeira Grande, but chances are you end up in a taxi anyway.

The landscape you find yourself in Agua das Caldeiras  is not what you would expect in Cape Verde. The pine forstest reminded us more of southern Europe. The path is quite easy to follow in the beginning. We passed the cova de Paul again, enjoying a view all the way even to Sao Vicente. 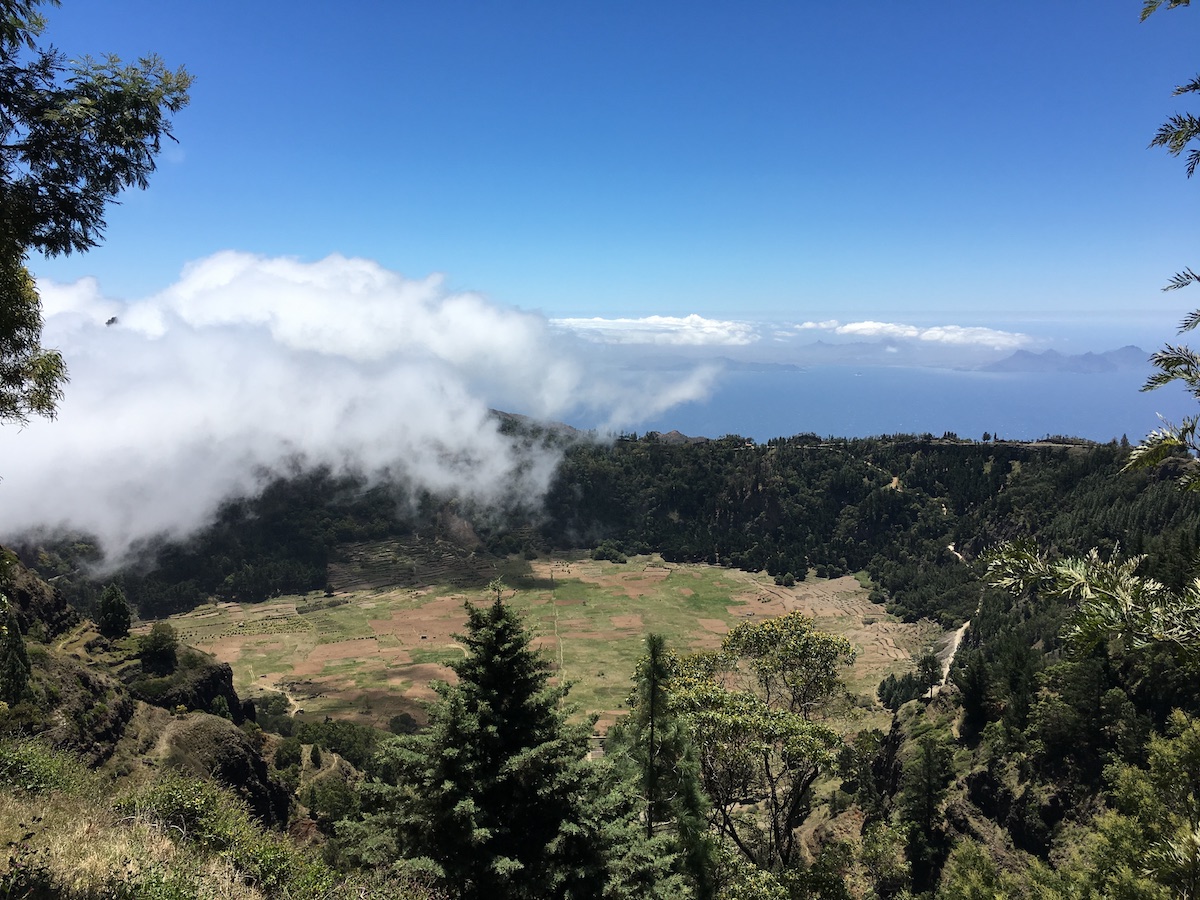 But soon enough we got to the end of the road. Literally. We stood in front of an ocean of clouds – and two valleys: Paul to the right and Torre to the left. That’s where the tricky part starts – descending 1000 meter. The path ist mostly ok, cobbled, but some parts are quite steep and slippery – not a pracitical combination considering the steep cliffs we were climbing down from. So we took our time, took a million pictures and enjoyed the views.

After two and a half hours of carefully climbing down the mountain we reached the first cultivations of cane sugar. From then on it was an easy walk on mostly cobbled paths through plantations, along terraces and through the beautiful hamlet of Rabo Curto. The village sits on top of a small ridge, and consists only of a row of houses and a narrow path in front of them.

We stopped in a little mercado for a break and a cold coke to re-energise.

After passing Rabo Curto it was just an easy walk down until we reached Xoxo, the cute village at the bottom of the valley. From here an asphalt streets leads all the way through the valley back to Ribeira Grande. If you want to walk in the most beautiful ribeira of the island, but avoid the usual ups and downs, then this is for you – get an Aluguer/Taxi in Ribeira Grande to Xoxo and just walk back. It’s an hour and a half or so and you will pass a small bar on your left hand side for a small break.

We walked to there and a bit further and then flagged down one of the aluguers going to and fro between Ribeira Grande and Xoxo. 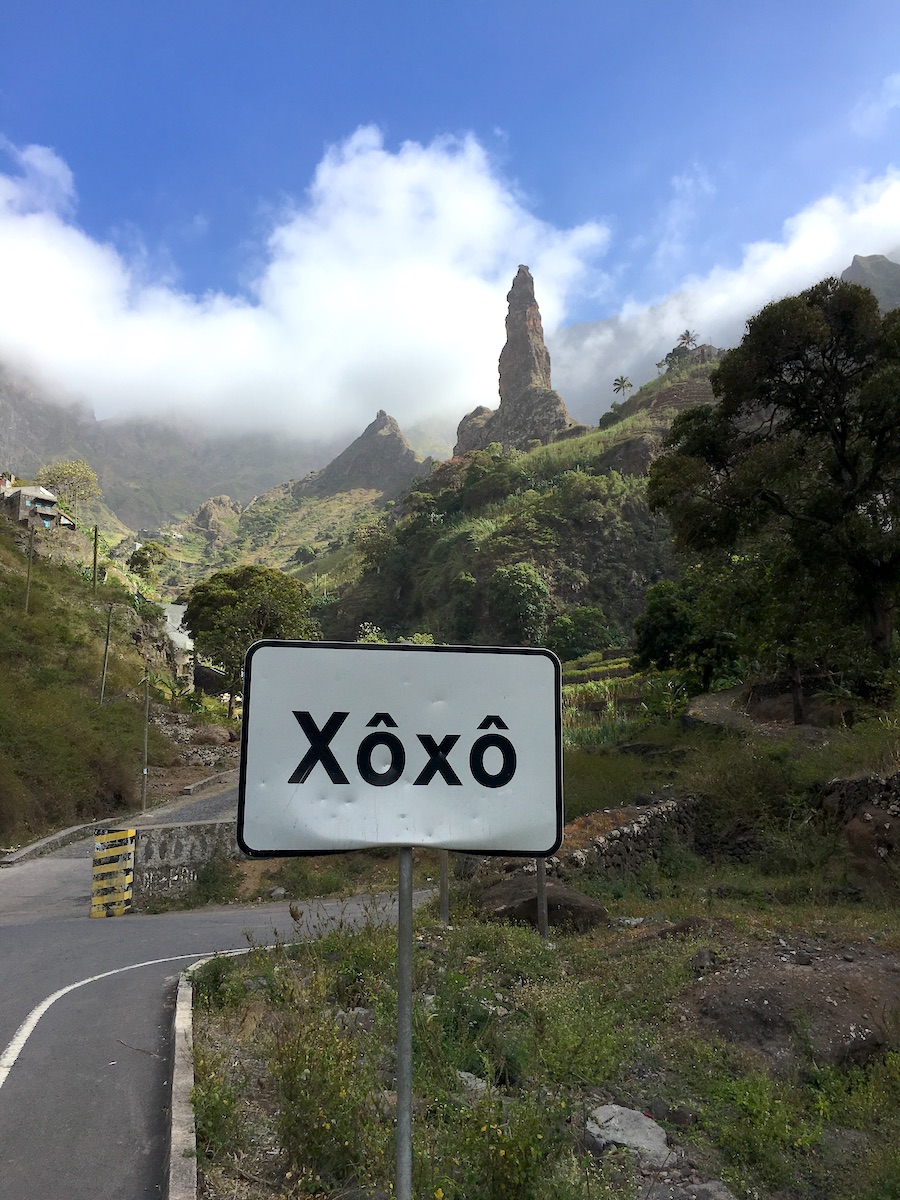 You definitely want to see more pictures of this hike! Look here.