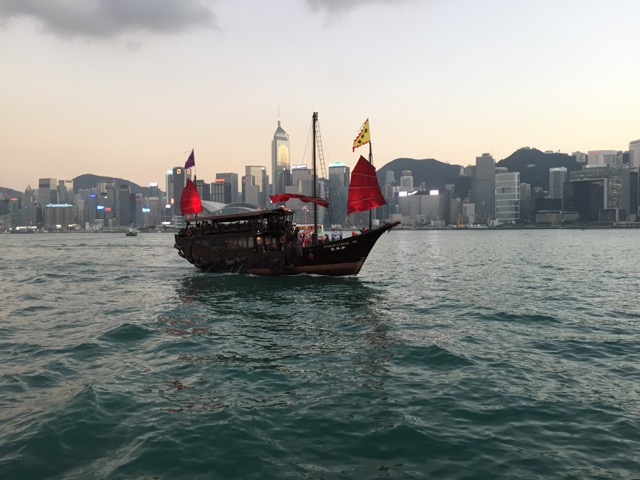 We think it’s best to put Hongkong at the end of your China trip, since it’s likely you’ll get a cultural shock when doing it the other way round. Hongkong is China, but it’s still completely different. Must be the British influence, that’s still lingering around. It’s much easier. Starting with the language, English is present everywhere, on street signs, busses, trams, on menus in restaurants, in shops… And most people speak it, too, and quite well. So no problems here.

The next thing is the traffic. We took the bus from Kaiping directly to Hongkong, and the first thing we noticed as soon as we had crossed the border was the silence on the road. Well, compared to what we were used to by now, anyway. No honks! How strange. When we got off the bus and walked to our hostel, we noticed another difference: When you cross a street at a green light, you don’t have to worry about getting run over by scooters. There aren’t any. So we walked a bit and noticed another thing, there is no spitting on the streets here. We found that really annoying in China, we just couldn’t get used to that omnipresent spitting…. Just one thing is exactly like in Mainland-China: It’s crowded. Maybe even more so than any place we’ve been to before.

If I had to describe Hongkong in a nutshell, I’d say it’s like Busan. It’s a city with so much to offer, that you wouldn’t expect at first sight. It’s got beaches, skylines, shopping, historic sites, hills, forests and awesome hiking trails. It’s amazing, from the bustling center of Mung Kok, the most densely populated spot on earth, you can go to secluded beaches or into the woods in less than an hour by subway and ferry.

And that’s what we did most of the week we were there. After spending two days on the main sights in the center, like strolling down Tsim Sha Tsui promenade to see the marvellous skyline of Hong Kong Island, taking a ride with the old Peak Tram up Victoria Peak to take the iconic picture of Hongkong’s skyscraper you might know if you’ve got an Apple Watch (some advice: don’t take the touristy tram up, it was not worth it standing in line like cattle for nearly an hour, just take the bus up and walk, it’s cheaper AND nicer), or just wander around the busy streets. 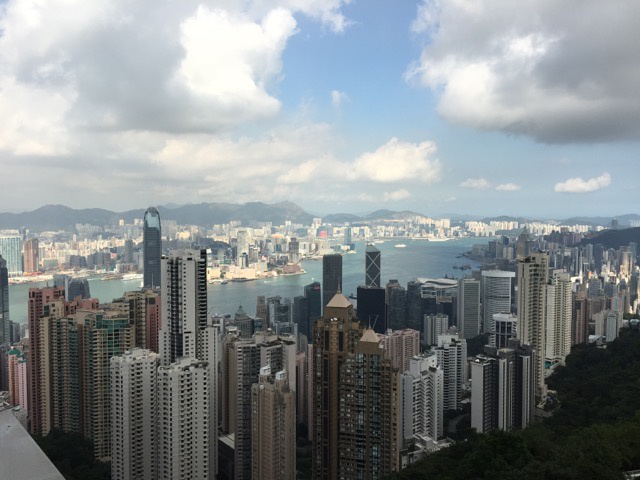 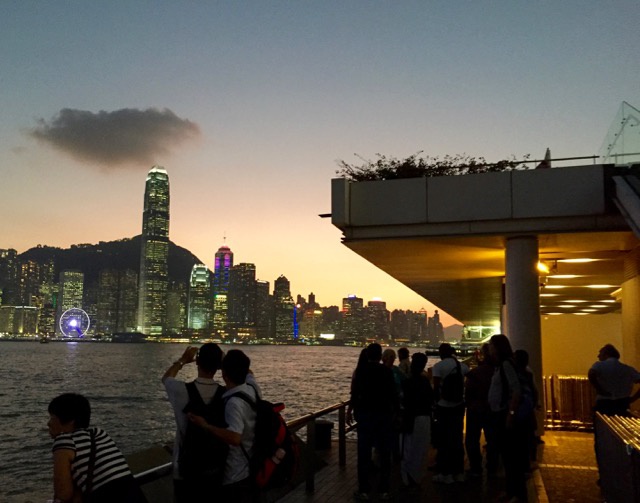 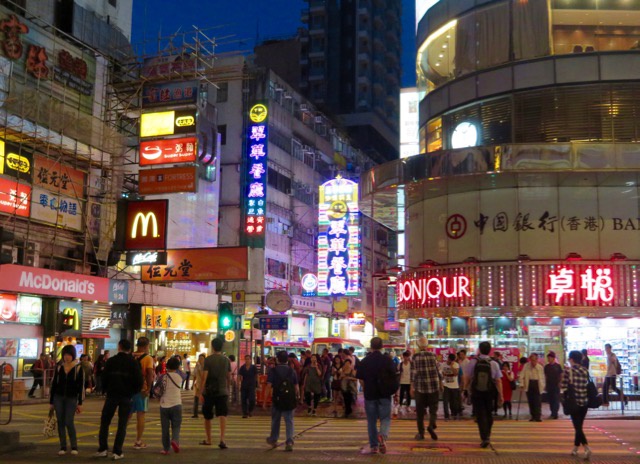 But the best way to appreciate Hongkong is by putting on your walking shoes and get out of it to admire it from a distance, preferable some hight. There are quite a lot hiking trails, from 50 to 100 kilometres long-distance treks to short day hikes and strolls. Here are our choices:

This is one section of the Hong Kong long distance trail and a popular walk, so it can get quite busy on the path. We started at the Chai Wan MTR station, and walked to the trailhead. It was a bit strenuous, since we had to climb a lot of stairs up a cemetery. But it’s worth it, there is a nice view from the top of the cemetery on the city.

We then hiked along the trail in the direction of Shek O beach. We met quite a lot of people who walked it in the other direction. The first half of the actual trail was easy going and shaded by woods, but there were rarely any views. But once we had made it to the ridge (a few more stairs but not as strenuous as getting to the trailhead up the cemetary) the views were breathtaking. Unfortunately, it was a bit cloudy, but that didn’t spoil the experience. 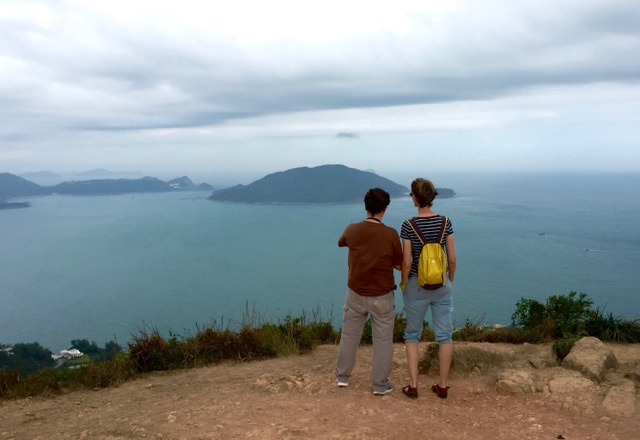 After descending we took the bus to Shek O’ Beach, which is a nice place to hang out and chill after an exhausting walk. We used these directions to get to the trail, they were really foolproof.

One of Hongkong’s outlying islands, that feel like a world apart. No skyscrapers. It feels definitely more like mainland China, since you see quite some scooters again (cars are not allowed on the island). But more relaxed. And it’s got nice rolling hills and easy paths to walk, nice beaches and a cute fishing port with a trazillion boats floating around. It’s also really small, you can easily cover it completely on foot in one day. 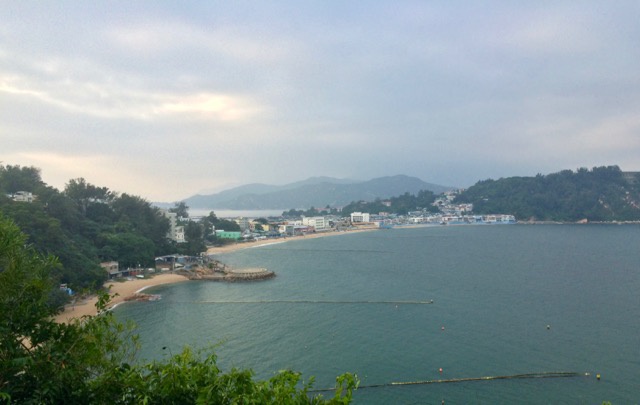 We first walked up north, visited the cute little but colourful Pak Tai Temple and followed the signposted family walk up a nice lookout Pavillon. After coming back and having a break at a seaside café we walked another loop around the central part of the island, across a path called “Mini great wall” (maybe that name evokes too high expectations, but it sure is a nice walk) on the island’s beautiful coastline. 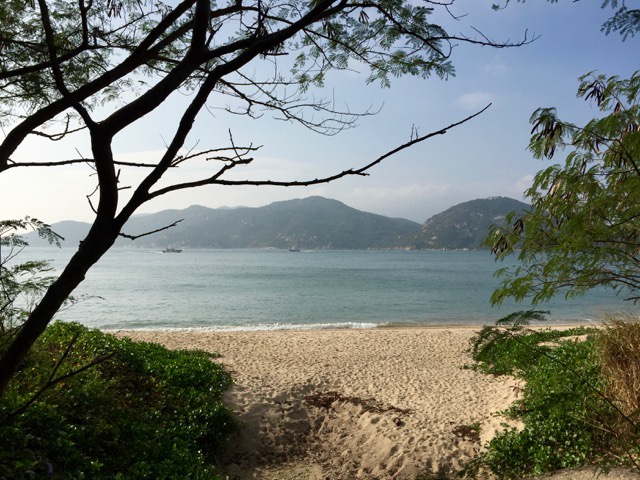 Ferries leave regularly from central and take half an hour (the fast service) or an hour (ordinary service). Prices and timetables can be found here.

You can also trace our steps on the island:

Something completely different from big city life is this trail in the new territories. The trail leads you through historic walled villages, which were built in the 13th and 14th centuries by the Tang Clan for protection from pirates and bandits. Although we used these directions, the starting point of the trail was not easy to find (might be because we decided to walk from Fanling station instead of taling the bus, we had to cross an industrial area, that didn’t look like there could be anything of interest hidden nearby…) and sometimes not easy to follow (we took a wrong turn every now and then, but with help of Google maps found back to the path). It’s easy walking, and interesting, again feels more like rural mainland China. 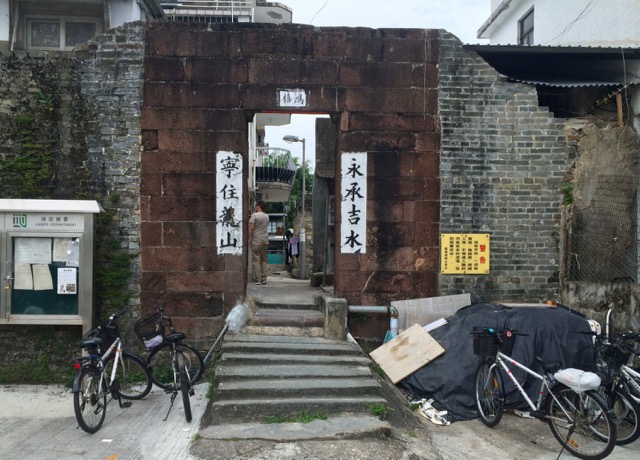 Lamma is the most popular of the outlying islands. We went there on a sunny Sunday, and it was busy. Really busy. There are two ferry ports on Lamma, Yung Shue Wan, which is the biggest and most touristy village, and more laid-back Sok Kwu Wan, which has a strip of great seafood-restaurants right on the shore. We had lunch there, a great start for our island excursion. 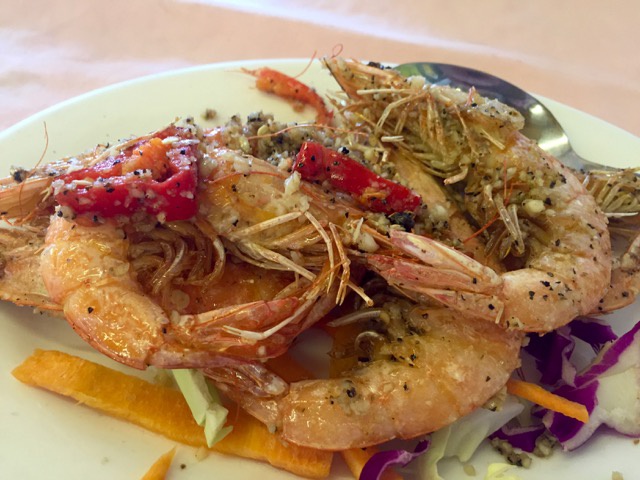 Both villages are connected by a trail, so you can take the ferry to one village, and walk to the other one to get back by ferry to central from there. We walked from Sok Kwu Wan to Yung Shue Wan, which seems to be somewhat less busy than the other direction. Since it was Sunday it was quite crowded. And don’t be fooled by the signpost telling you it’s a “family trail”, it gets quite steep in parts, so not really suitable for small children we think. But for the ordinarily fit adult hiking this path shouldn’t be a problem. It also leads you past some nice beaches, so you could take a break and chill in the sun for a while. One beach is overlooking a power plant, that’s quite an interesting experience. 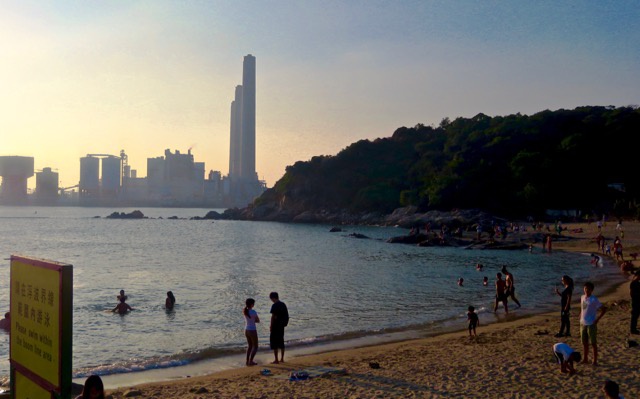 If you want solitude, we can recommend the path that leads round the southern part of the island. We did that before we went to Yung Shue Wan, and we didn’t quite got round it, but took a turn left up Ling Kok Shan hill. That was really strenuous, but the most rewarding hike we did in Hongkong. Of course the perfectly clear weather helped – the views were nothing less but spectacular! 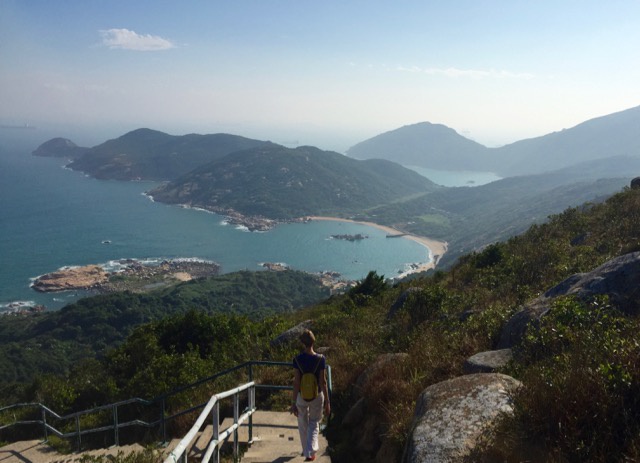 Ferries leave from Pier four at Central, look up prices and timetables for both villages here.

And yes, we’ve kept track of our hike again:

If you haven’t seen enough, here are a few more pictures of Hongkong:

2 thoughts on “Hiking in Hongkong or China for Beginners”