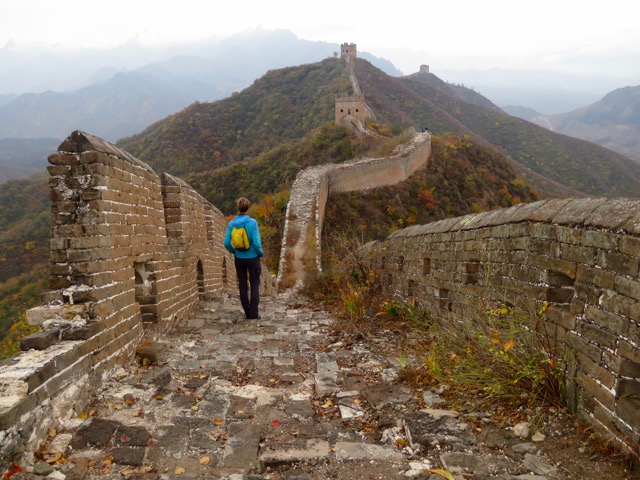 I remember the host of a tea house in the Japan Alps, who explained to us why he didn’t like Chinese tourists too much. They would come in large busses and numbers, make a lot of noise, take a lot of pictures and set off, never going beyond the main attraction.

So here we are now, in the motherland of mass tourism. And clearly one main attraction not to be missed is the Great Wall. After already having experienced first hand what touristy places in Beijing can look like, I was kind of worried about what it would be like.

But it turns out, there is still at least one spot in China that feels remote, where you can marvel at that great structure and the surrounding mountains without having to avoid selfie-sticks and masses of tourists all the time. It’s the Jinshanling section of the Wall. We booked a tour at our hostel in Beijing, it was a bit more expensive and took a bit longer to get there than the other  Great Wall tours offered (two hours on the bus one way), and the walk on the wall is harder, because it’s mostly unrestored. But it’s absolutely worth it. Marvellous. Wonderful. Amazing.

Just like I have always imagined it. We met maybe 20 people along the two-and-a-half-kilometre hike on the wall. And though it was kind of foggy and misty, that created a special atmosphere in the mountains. And it wasn’t raining (something we would learn to appreciate later…)

So here is a selection of the million pictures we took there: