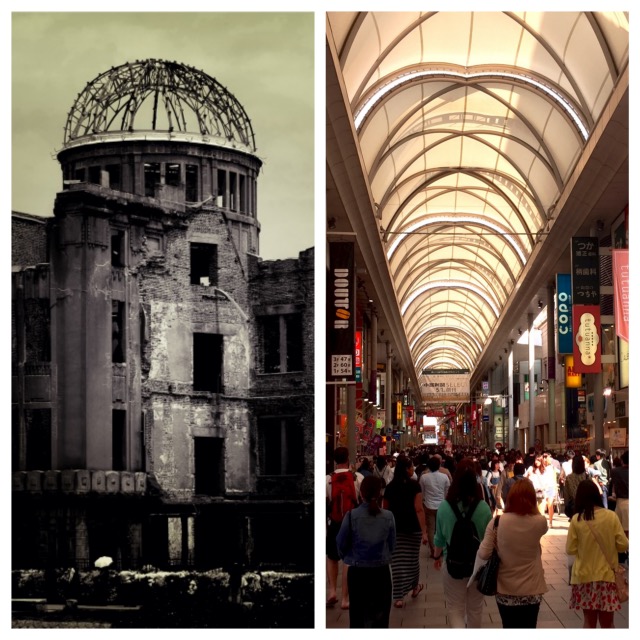 When you travel to Hiroshima inevitably one thing comes to mind. You might think you know it all – the first A-Bomb being dropped here on the 6th of August 1945 at 8:15 in the morning, thousands killed instantly, destruction of a whole city and the horrible after-effects.

But its one thing reading about what happened here, standing directly under the spot where the bomb unleashed its catastrophic force and actually touching things that have been deformed in the explosion, like tiles, glass, and walls is something quite different.

The A-Bomb Dome is one of the very few buildings that wasn’t completely torn away by the blast, though anyone in it died instantly. It was preserved to look as it did directly after the explosion. Right next lies the Peace Memorial Park, where lots of monuments can be found, like the remarkable and moving Children’s Peace Monument. It was inspired by a girl who survived the bombing but died of leukemia years later. She wanted to fold 1000 paper cranes, because according to public beliefe this would ensure her recovery. She died anyway. Still today people continue to fold cranes and donate them to the city of Hiroshima, so the actual monument is surrounded by showcases full of them, in all possible sizes and colours.
Another must see is the Peace Memorial Museum, which explains everything – the destruction, the deaths, the wounds inflicted, but also the science of the bomb – in painful details. Equally powerful are the testimonials of survivors that you can hear in the Memorial Hall of the Atomic Bomb Victims.
But reducing Hiroshima to its past wouldn’t do it justice. Today’s Hiroshima is far from a depressing place. It’s great for shopping, night-life and eating out. It’s got a vibrant city center around the roofed Hondori-street with thousands of cafés and little shops and a lively entertainment district around Nagarekawa and Yagenbori-streets. Foodwise, try the local specialty Okonomiyaki, a savoury pancake with noodles, meat or seafood, that you get basically everywhere in the city. And go visit the castle, that has been restored and is situated inside a beautiful park.
The pictures:
Comments are closed.