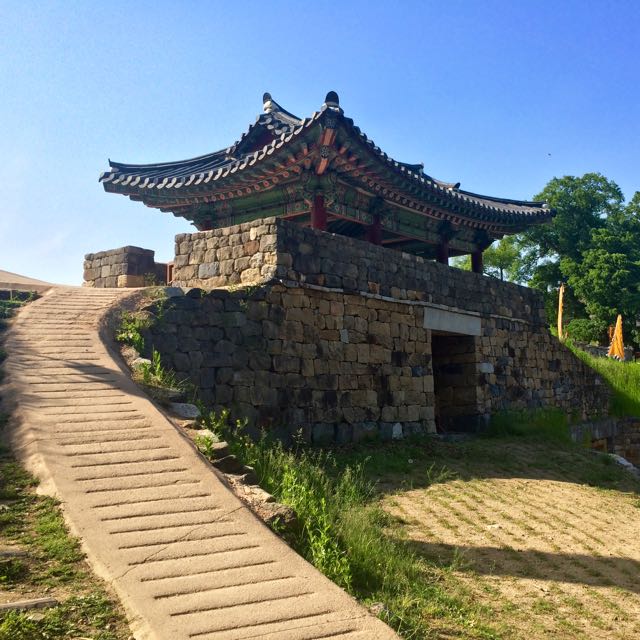 We based ourselves in Daejeon for a history lesson: We went to see some remains of the Baekje Kingdom, around 18 BC to 660 AD one of the three Kingdoms of Korea, in Buyeo and Gongju.

In the fortress of Buyeo, Busosanseong, the Baekje Army had somewhat of their own “300”: A Baekje army of 5000 man stood against 50.000 Chinese soldiers in 660 AD, and was only finally defeated in the 5th attack. There is a small shrine in honor of the General who defended the Kingdom that long despite the bad odds. After defeat, 3000 women supposedly threw themselves from a rock (which is now called “falling flowers rock”, Nakwa-am) on the other side of the fortress – there is a pavilion with nice view from that spot. Down some very steep stairs, quite close to the river, there is a cute little temple nestled into the rocks. We were there on a Saturday, and it was a bit crowded, unfortunately.

In Gongju we visited some ancient Baekje tombs. They consisted of hills, covered in grass and the inside was sealed, unfortunately. But they have a replica of the King’s tomb, with some explanations, which is quite nice. After that we went to see Gongju’s fortress, Gongsanseong. We arrived just in time to watch the end of a changing guards performance (the dramatic music from the loudspeaker somewhat spoils the authentic feel…) which is staged every full hour on weekend days. The fortress itself is nicer than the one in Buyeo, I would say, not only because it wasn’t that crowded, but also because you can actually walk around it on the walls. There are several pavilions, gates, vista points and a small temple on the way. And lots and lots of steep stairs. Lots! Steep!