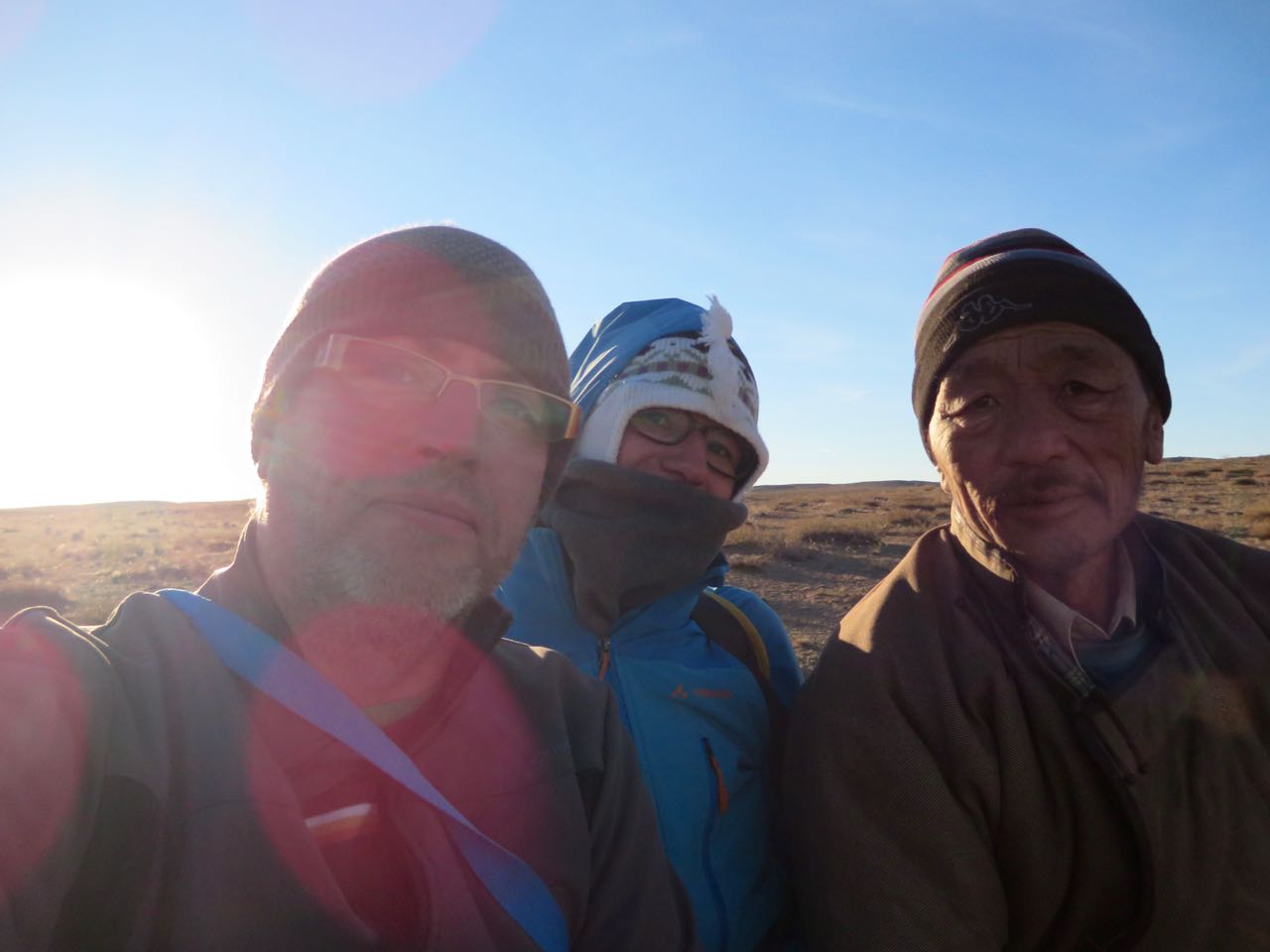 Henry was already freaked out before we even started our trip to the Dundgovi Province, the Middle Gobi. Our Tour Operator Ger to Ger provided a crash course about Mongolian culture, language and outdoor security for us one day before we headed south. We wouldn’t be accompanied by a guide, but be out there and visit Nomad families on our own, be more like cultural explorers than tourists, so it’s probably good to know what NOT to do in a Nomad ger.

And there are quite a few things to remember: Don’t whistle inside (it means death is upon one of the family members), don’t roll up your sleeves (it”s a sign of aggression), receive things that are handed to you with both hands or the left hand supporting the right arm, never put down a bowl of food you received before you’ve tasted it at least once (big offence), never sit directly opposite to the door (strictly reserved for the head of the family, the oldest man usually – if it is offered to you politely decline and request the eldest man to sit there instead). Never turn your back to the altar that is usually somewhere in the back of the ger or point your feet directly at the fire, since it’s holy. So don’t throw any trash in it. And these are just a few points of the Nomad code of conduct.

Equally important is the health and safety advice. So we learned how to get of a horse that’s out of control (do the “eleven o’clock role” – at least theoretically, if we ever manage that in reality remains to be seen), how to deal with an Asian Pit Viper that tries to get at you (avoid at all cost, use a jacket or scarf to distract it, never turn your back), how to treat flesh wounds and injured arteries, how to navigate in the wilderness and what to do if we get lost (stay put and wait for the Nomads to find us).

Mongolians call everything outside Ulan Bataar the “countryside”, which is the greatest euphemism ever. Once we had left the capital behind us, we drove through hills, rocks and desert. We saw quite a few animals, horses, cows, sheep and goats, and the occasional ger. When we arrived in Mandalgovi, which feels like worlds apart from Ulan Bataar, much more like a developing country,  our driver was already waiting for us. He drove us for the next 80 Kilometers to our first host through the desert, with his ancient Russian 4WD, that gargled a bit when the engine was started but turned out to be quite reliable. In the late afternoon we arrived at the first ger. 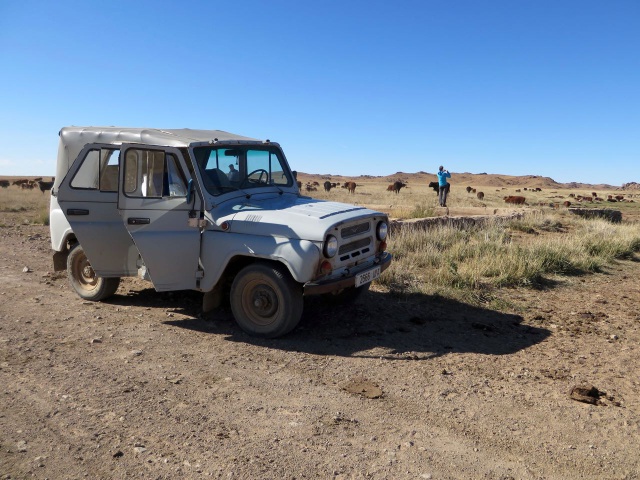 Although it was sunny, not a cloud to be seen, it was freezing cold because of an icy wind. The cold environment was more than made up for by the warm welcome we received. We got milk tea (which is made of milk, boiled with water, a few tea leaves added and then slightly salted), great for rehydration, Aartz, which is dried curds made from sour milk, and a noodle soup with meat. Warmed up and full it was time to leave for our next destination, to the family with who we would be staying the night. Our host drove us there with his horse cart, the “Mongol Taxi” he called it.

We arrived at the Chimedorj family with the last sunlight of the day, the sun was just about to set behind the mountains. Time to warm up, I couldn’t even feel my feet any more, after we had sat on that cart for an hour. The family had an extra ger just for us, the oven was lit and we got more hot milk tea, again a noodle soup with meat and after that buuz, traditional dumplings filled with mutton, that were absolutely delicious.

Although none of the nomads we’ve met spoke English we managed to have a basic conversation (where are you from, how old are you, what do you do, stuff like that) with the help of the phrase book we got at orientation lesson before we went. Turned out, the nomads had their own Mongol-English phrase books, so that also helped a bit. Still, communication was mostly limited to hands and feet. But it worked out, and the people were so caring and nice and went out of their way to make us feel at home.

After it was dark it was soon time to call it a day. We got a bucket full of dried dung for the oven and were told, that this would be for the night, after it was burnt, the oven would stay out till the next morning. So we wrapped ourselves up in long clothes, our sleeping bags and some blankets, to prepare for a cold night sleeping on the floor. And boy, was it cold. The ger had an opening in the roof, where the smoke pipe sticked out. So all the heat from the oven was gone very soon once the fire had died.

The next morning Mrs. Chimedorj made fire in our oven before we got up so when we finally did, it was nice and warm. We got breakfast, milk tea of course, and noodle soup again. We spent the morning playing with their three year old daughter, who was very sweet and curious about us. Especially our torch, which could be charged by spinning a handle, intrigued her. Then we got called to the family ger, where the wife showed us how she made felt from sheep wool. In the early afternoon it was time to move on, so Ms. Chimedorj took us with her on a trek through the desert to the next family. Luckily, the icy wind was gone, and though it was still chilly, it was nice walking weather. Her little daughter accompanied us, at least for a while, until she got tired of walking and got picked up by her father, who took her on the motorbike with which he was carrying our backpacks. We walked through a beautiful rocky landscape, the Ikh Gazriin Chuluu Mountains, stopped several times for short breaks on our way, one at a small hidden cave. 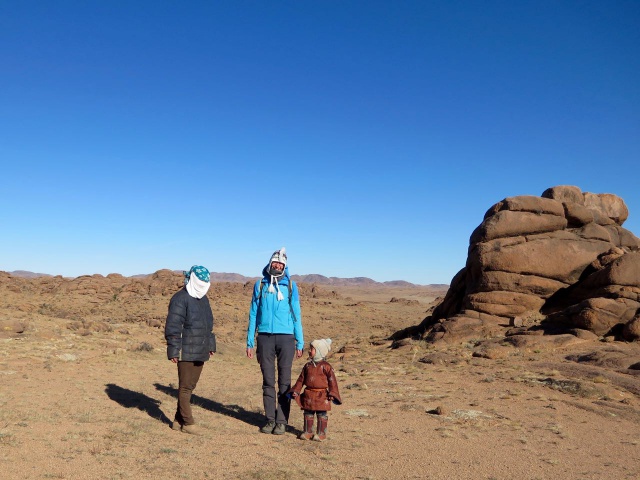 Early afternoon we arrived at the gers of Otoo and his family. We all were greeted warmly and got served – you guessed it –  hot milk tea, accompanied by a selection of dried curds. They are actually quite delicious, slightly lemony. After lunch – yes, noodle soup – Otoo took us for a walk around the rocks to a memorial, set in the middle of the desert. There is a parking sign in front of it, quite strange, since there are absolutely no people around, except for the few nomads who live there. And it’s so far in the outback, can only be reached by gravel roads for which you need a good 4WD, it’s hard to imagine crowds coming with cars and busses. But who knows what will happen to Mongolia in the future, maybe in ten years time the busses with Chinese tourists come in masses to this place…

Next we climbed up some rocks to visit more caves. In the second cave we surprised a black mountain goat, that was lying  at the back of it, apparently dozing. It jumped on its feet once we entered, Otoo was trying to catch it, but it managed to get around him and out. Me and Henry could jump aside just in time or it would have run us over. In less then ten seconds it had climbed up a rock 50 meters away and was gone. Amazing, how fast these animals move around on this tricky terrain.

When we returned to the ger the lack of sleep last night caught up with us. We rested for a while in our ger. When we got up, Otoo’s sister was making noodles for dinner and his younger sister, six years old, taught us the Anklebone-game. It’s played with sheep’s anklebones, hence the name, that represent horses in a horserace and are also used as dice. Whenever the right side of the bone is up after the dice are rolled, you could move your horse a step forward. When the sun was setting we went outside again to admire the great landscape in the evening sun. It truly is stunning.

After dinner it was time for another cold night. Though this time we slept in beds in the ger, and the roof was closed where the chimney stuck out. Still, it got really cold again, I even woke up once and couldn’t feel my toes anymore, because the blanket hat fallen down. We still had some dried dung, so Henry fired the oven once more and I went back to sleep. The next morning, my toes hadn’t gone all black, so nothing to worry about here. We got breakfast – no, this time no noodle soup, but a savoury porridge-like dish with meat. The first meal actually that was not so much to our liking, I guess we are just used to porridge being something sweet. But it was hot and filling. We played more anklebone with the sweet little girl and in turn taught her a game with that she could practice maths with a deck of cards. Later in the early afternoon we went for another walk around the rocks with Otoo and his little sister, who is climbing the rocks nearly as easily as that mountain goat we had met the day before.

In the early afternoon our driver arrived to pick us up and bring us back to Mandalgovi, where we got on the bus back to Ulan Bataar. We had a fun ride back through the desert with that old 4WD, we stopped a couple of time to have a closer look at some camels that crossed our way. 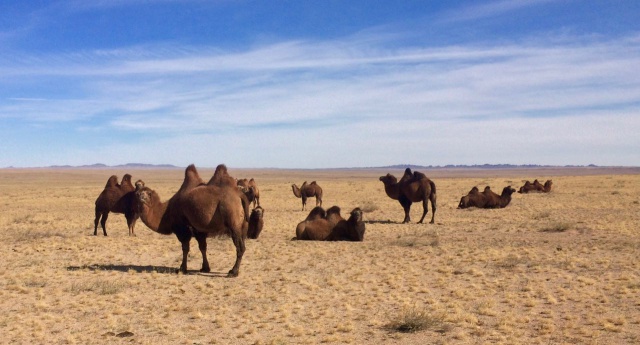 This was possibly the most interesting trip we have done so far, this whole year. It is probably the most authentic experience of life in the Mongolian outbacks you can get as an “outsider”. And if you keep in mind that you’re actually on an expedition, and not on a tailored trip, have an open mind, are willing to learn about a different culture, and most of all are able to deal with certain hardships that come with this kind of life (like no showers and no toilets – but hey, peeing under the stars of the milky way can be pretty special ;)* you will have a great time!

“Unless a Pit Viper bites you in the butt and you die after hours of endless agony, or a Mongolian Sheep dog thinks you’re a thief and tears you to shreds, or the wolves get you, same thing but more of them. I won’t even start about the flies that lay eggs in your eyes and grow maggots in your eye sockets… and more…” – Henry