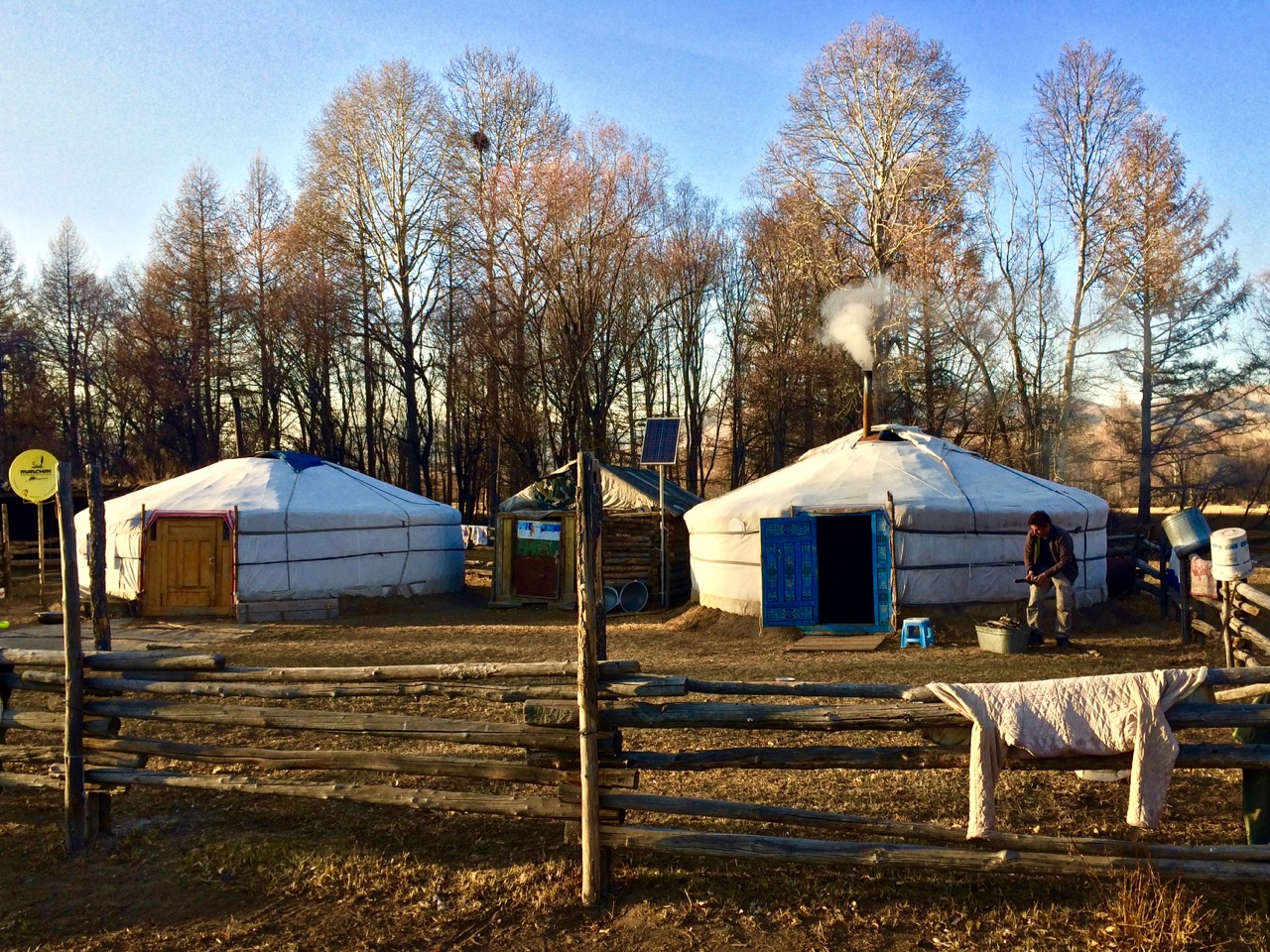 When we arrived at the bus station from where we were to depart to our first ger inside the Terelj National Park, we where amused at the three drunk Mongolians engaged in a fist fight next to an old Russian 4WD. Little did we know that it was the same 4WD that had come to pick us up, including the drunk Mongolians.

Sow how many Mongolians fit in a standard sized 4WD? We counted and found out: ten people, that’s including us, six sober and four utterly wasted. The driver (sober), two on the seat next to him (drunk, one was constantly falling over into the steering wheel and had to be pushed back), five in the back (sober) and two more in the trunk (drunk).

“Hello. My name is Hoge. I am Mongol.” Hoge, sitting behind us in the trunk, told us approximately 25 times during the bumpy off-road ride through shallow rivers, mud and the woods . The engine died a couple of times on the way, luckily the 4WD had a crank handle, you know the ones like in the old B&W movies they stick in the front of the car to start it. First time to see one of them in action.

We eventually arrived at our first ger. Guess what, Hoge and his drunk friends had the same destination. During the rest of the evening we were served milk tea, and a nice veg and sausage soup, unfortunately the sausage was in the really thick and chewy bit of the large intestine. Yummy…

Hoge was still with us, and still telling us:” I am Hoge, I Mongol, me strong, Ghengis Kahn” and still asking for our names. By now I had told him I’m Henry, John, David, Sven… didn’t really matter what name I told him, he would ask every few minutes anyway. We spent the night in a ger with five beds, luckily we didn’t have to share it with our drunken companions, but with a Canadian couple, who had their last evening and were going back to Ulan Bataar early next morning.

The next morning we were served bread and some sort of cream cheese, that looked like clotted cream and tasted of wet sheep. After the Canadians had ridden off to the bus stop, we were served another hot breakfast in the family ger which was quite nice. And as soon as our host had returned with the horses it was time for us to set off to our next destination, too. 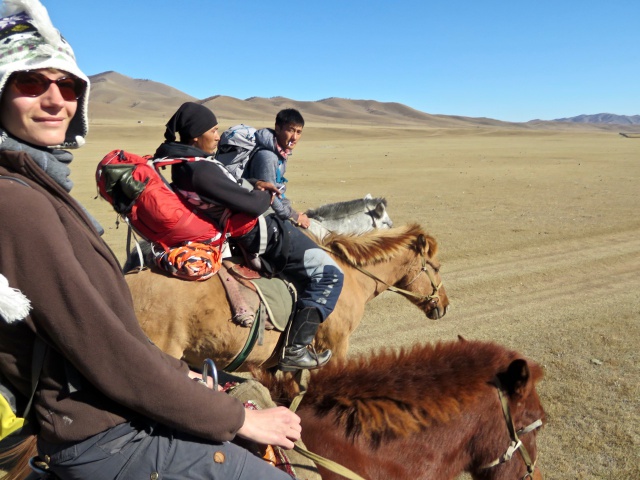 So off we went, dashing through the Mongolian steppe, at least in my fantasy. It turned out that my horse, H’Darr, was even lazier than me, so I watched Anja and our two guides ride away for a while until I could finally convince H’Darr to put one hoof in front of the other.

With time it got better and eventually even some short gallops were possible. While not the fastest horse, it was very brave a didn’t have any problems with very steep declines or drops. But even if I caught up with the others it would refuse to pass them, always staying at least half a horse length behind the others, wich is why I basically mainly have pictures from behind the others and at a distance. It was fun though. Anja on the other hoof had a much faster horse, Hurun, though it needed some convincing in the beginning, too.

Three hours of riding, getting lost in the woods, asking at two other gers for the way, loosing one of our guides in the woods, finding him again, and we reached the next ger where our next host, Boge, (not to be confused with Hoge!) was awaiting us. Same procedure as always, Milk Tea, snacks, introduction, I work as… and so on.

We had some rest and more food and stayed the night in our own ger. The next day Boge’s wife gave us some traditional stitching and sewing lessons and made us nice cases for our phones. She had a real antique sewing machine, one you have to pedal. Then it was time to take off again. This time on ox-cart, which is slower but it was only roundabout one Kilometer to the next place. 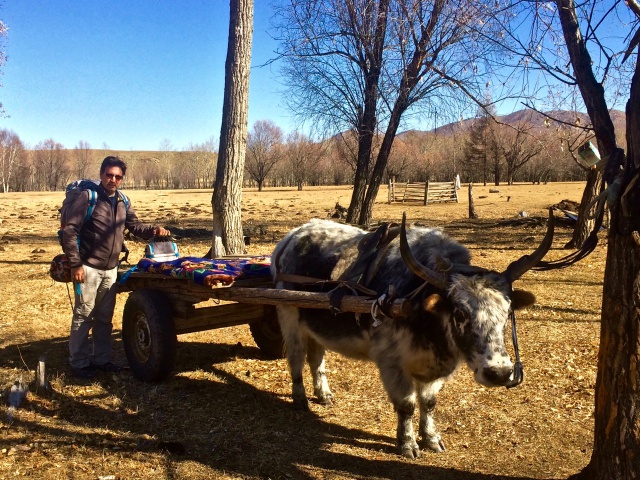 Our next host, Mr. Bolt, was a recognised horse trainer and owned quite a large herd of horses. We got to see how he and his wife milked the mares (from a safe distance, since they like to kick) and later tasted the fermented horse milk they make from it, called Ayrag, tastes like yogurt with a squeeze of lemon in it, not bad actually (though Anja didn’t like it at all). Anja got to help with making Boortsog, fried dough, close to a donut, very delicious, especially when fresh and still hot. The Mongolians dip it in Milk Tea or put Urum on it, which comes very close to English clotted cream and is also very good. Meanwhile I tried some archery.

In the afternoon Mr. Bolt and one of the boys, must have been about 14, left with the ox-cart to pick up a sheep that was doomed to be served on a wedding sometime soon. When they returned with the sheep, still alive and tied to the cart, we found out that it was to be slaughtered. Immediately. Skip the next paragraph if you’re not into details.

Mr. Bolt and the boy untied the sheep and carried it over to the front of their ger. They turned it onto its back, the boy held the back legs still, Mr. Bolt kneeled over the top part,  shaved the wool from just below the sheep ribs and made a small incision, maybe ten inches. He then pushed his hand into the sheep, grabbed its heart and squeezed it tight thus killing it. The hole procedure didn’t take longer than three minutes, during which the sheep didn’t make a lot of sound. By killing the sheep this way the blood stays inside and after gutting it is used for making things like sausage. After the sheep was dead they took it into their ger, were they live, sleep, cook, and chop up their animals. Weird for us, normal for them.

While it may seem cruel to us, keep in mind that the animals in Mongolia live for many years, roam freely around the country without fences and have a much richer life than most animals we buy in the supermarket. They are also the livelihood of the Nomads, so nothing is wasted. They use the meat, the blood, the wool, skin, intestines and bones and aren’t picky about what part of the animal they eat.

The next day we went on to our last ger of this trip, again by ox-cart. We were a bit disappointed that we didn’t go on horseback, but then it was only a very short trip. Our next family was quite busy preparing the winter shelter for their animals and getting them in there, so we were basically left alone and spent the time walking around, relaxing in the warm autumn sun, watching animals and gathering wood and birchbark for the night. 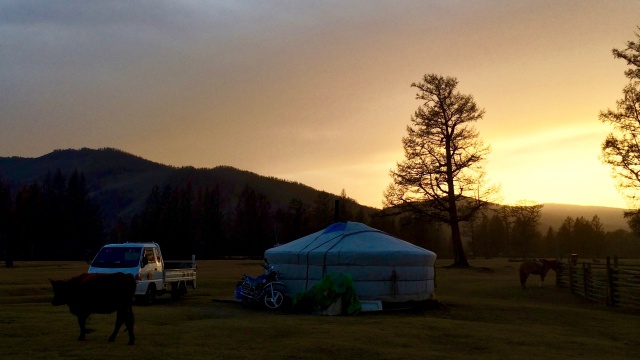 The next morning we were brought back to the bus station, where we jumped on the 8 AM bus back to Ulan Bataar. What’s left to say? After a week in the outback you really learn how to appreciate a nice hot shower!