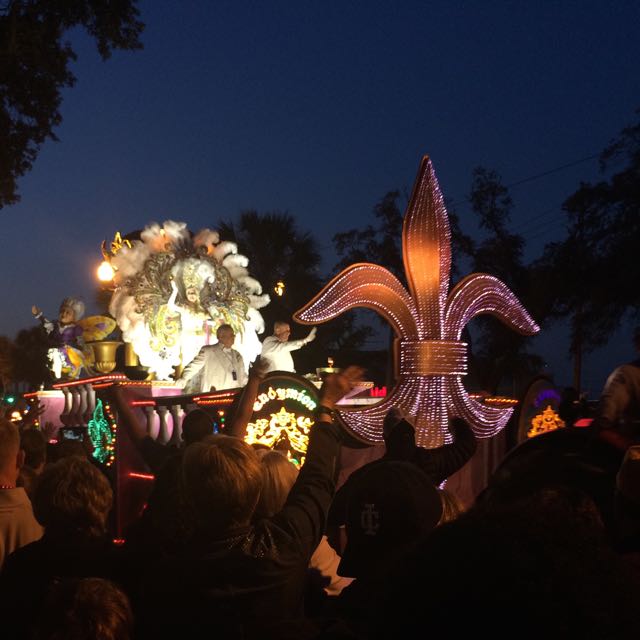 There is no way to escape Mardi Gras. It gets you everywhere – if you use the public transport, that has to take detours to avoid parades, stroll around French Quarter, which is full of people in costumes and drinking, or just walk around anywhere, where you see beautifully decorated houses.

We’ve been in the middle of this for a whole week and tried to absorb as much as possible. We’ve seen the parades of the Krewes of Nyx, Muses, Tucks, Endymion, Bacchus and Rex. We’ve caught tonnes of beads like necklaces, cups, bracelets, stuffed animals (and now have no idea what to do with this, we obviously can’t take all this with us…). And we have gazed in awe at the huge mountains of litter that remain after each parade. The streets are cleared instantly after it is over, so the next day it looks like nothing has ever happened – amazing!

Oh, and if you thought, Britain was obsessed with war: Here they dedicated a whole parade (the Rex Parade on Mardi Gras Day) to “Wars that shaped Early America”.

Mardi Gras Day, today, was actually the only day with bad weather – it was freezing outside, temperatures were under 10° C. The days before we had nice days of spring with more than 20°C.

A collection of our favorite pictures: