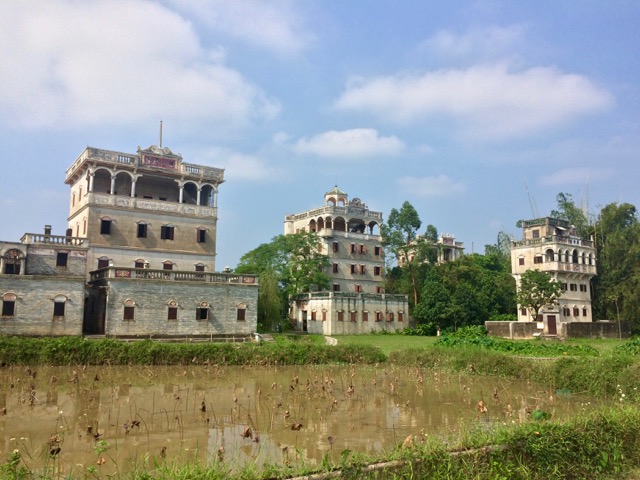 On our way to Hongkong we stopped in Guangzhou, from where we did a little side trip to the tiny village of Kaiping (roundabout 600,000 inhabitants, therefore a village, clearly). Obviously, not a lot of tourists do that, at least not Western tourists. We hardly saw any.

The main attraction around that area are the imposing towers, the so-called Diaolou. They were built by emigrant Chinese, who returned wealthy from overseas. They found their hometowns threatened by raiding bandits and regular floods. Alongside with a lot of money they brought fancy architectural ideas with them and so they built these remarkable structures to protect themselves combining eastern and western elements which resulted in quite curious looking buildings. They were named a world heritage site by UNESCO in 2007. 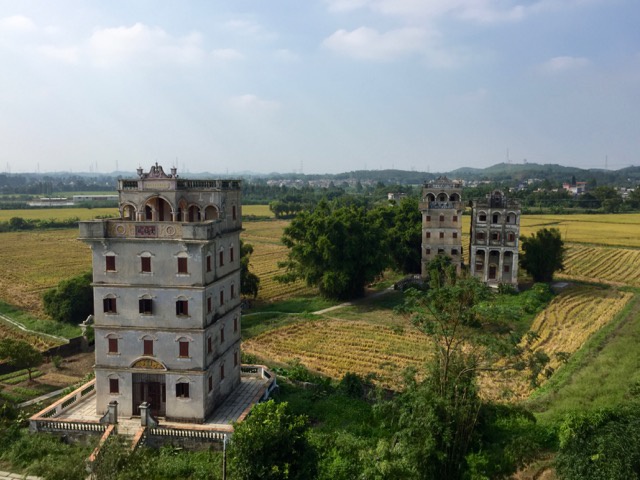 We were blessed with anther beautiful day (much like the one day in Yangshuo) when we were in Kaiping, Perfect for some countryside exploration. This time with public transport, shouldn’t be too difficult. To get to two of the most beautiful Diaolou Sites, you jump on bus No. 17 from the Yici bus station in Kaiping, and get off close to Li Yuan, the Li Garden. Don’t under any circumstances trust Google Maps where Li Yuan is.

We did, and as a result we got off five kilometres too early. When we asked a local, an old woman, where we would find Li Garden by showing her the Chinese signs, she started laughing uncontrollably and wildly gestured. We didn’t understand what she tried to tell us in Cantonese, just figured that we had to go further down the road. So we did. And walked and walked and walked. No sign of Li Garden. Every now and then we would ask someone to confirm we where still on the right path. Most of them reacted similarly like the old woman. We soon figured that Google had been completely wrong about the location. Well, at least it was good exercise. After an hour of walking in the burning sun we finally reached a crossroad with a signpost that told us it was only two more kilometres to go.

And then we suddenly heard somebody talking in English. “Hello, where are you from?” This is how we met Marek, obviously heaven-sent. He was from Poland but had been living in Kaiping for ten years now. He showed his niece and nephew around, who were with him and traveling China for the first time. They were heading to Li Garden, too, and offered us a ride there. They were also going to the Zili Village, which was even further away and probably would have been completely out of reach for us. What a great coincident, just minutes before I was so pissed at our mistake and had already written off that day, and suddenly everything turns for the best. After seeing Zili and Li Garden they even gave us a ride back to Kaiping, right in front of our hotel. How awesome! Thanks guys, again, you really made our day!

The next day didn’t look quite as beautiful, but it was still warm, so we decided to see the historic town of Chikan. Got on a bus again, this time no embarrassing public-transport-fail (it was easier, though, just jump on bus 6 at Yici station and don’t get off before it’s final destination). Chikan’s historical center, for what you’ve got to pay a small entrance fee of 40 Yuan, is used for a lot of movie and TV productions in China. We didn’t know a single one of them, obviously. Still, it is a nice walk around and also interesting, especially the exhibition about Chinese Migration in the 19th and 20th century, that is somewhat hidden away at the very end of the road.

Kaiping has the biggest overseas Chinese population in China. They migrated to the United States, Canada, South and Middle America, Australia, Southeast Asia, in search for a better life, but most of them to the U.S. Not always successful. It is quite easy to see parallels to today. First the Chinese were welcomed in the States, but when the economy deteriorated, they were more and more treated with contempt. Chinese who wanted to immigrate were eventually put into detention camps, where they were interrogated and sent back, if they didn’t pass this interrogation. Conditions were pretty bad, even if they made it in. Many were lured in by promises of work and good pay, but were held as poorly paid workers without any rights in the end, a slave-like existence.

A few however got lucky and quite wealthy – these were the ones who built the Diaolou, when they returned. They also contributed to the development of their home by building schools and hospitals. And this exhibition was also funded by expat Chinese. There are a lot of moving testimonies and stories to read about, and it makes you think about today’s migrant crisis in Europe – it’s not like there hasn’t been anything like it before, human history is full of people moving from one place to another. And still people never seem to remember where they ancestors actually came from…

But also the rest of Chikan is pleasant, there is a nice market on the riverside to stroll along (though a bit crowded), and lots more of east-meets-west style architecture. All a bit run down, but in a charming way.