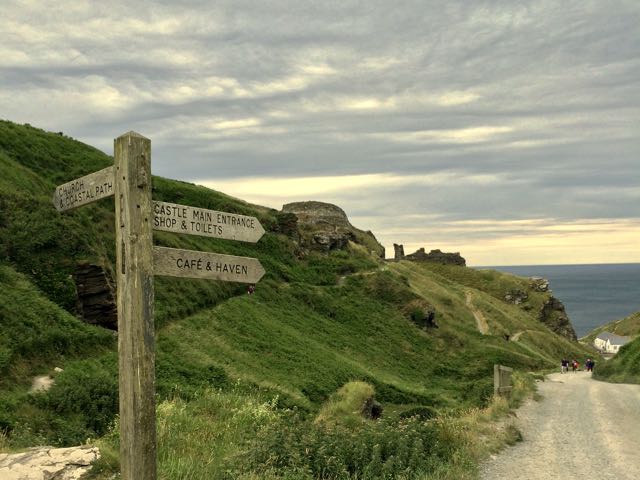 I am beginning to feel guilty about using public transport so much. But then, the weather has played a lot of tricks on us the past couple of days. Again. We had a bit of everything. Sunny and warm, cloudy and foggy, rainy and storm.

After we had said Goodbye to Ray, who had been accompanying us for three days, we took the ferry to cross over to Rock, and then walked to Polzeath. From there on, so our guidebook told us, the way would be „strenouus“, so we hopped on a bus on to Port Isaac. Port Isaac is known in Britain as the hometown of „Doc Martin“, a famous but somewhat sociopathic TV-doctor. It’s very picturesque, a real gem, but also quite overrun. Despite that, there is no tourist information, so we asked in a Fudge-shop about available accomodation around. We got a list of BnBs and tried like the first few on them – they were all fully booked. They were also quite expensive. So we went for a coffee to contemplate on what to do. In the coffeeshop the waitress told us about a campsite, that was more or less around the corner. In Port Gaverne. So we walked there, in pleasant anticipation for having found a bargain – the waitress said it was „quite nice“. Unfortunately, when we got there, we were told by an elderly lady, that she expected ten tents and a campervan to stay on her pretty but small site – so it was full, sorry. But she offered us to stay in her garden. We had a look around – there was a dog who had been fouling in a lot of corners of the garden, and it wasn’t really even, so we said thanks, but no thanks and went on. Since we would have to wait an hour or so for the next bus to take us on to Tintagel, we decided to call a cab. The cab driver was fun, he told us how the first wind farm in Britain came into existance (to prevent a nuclear power plant, but he was not sure, whether there have ever been real plans for that or whether it was just a myth…) Anyway, he got us safely to a campsite in Tintangel. 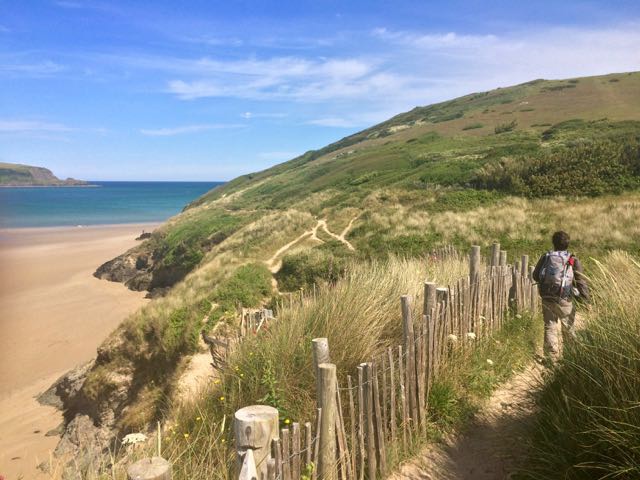 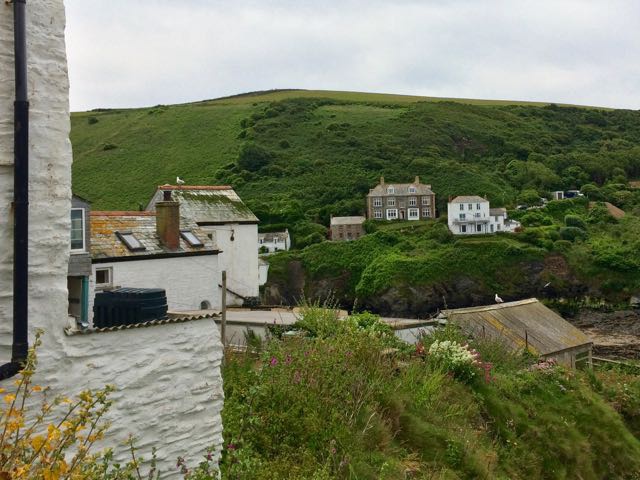 We went for a walk on the coastpath in the other direction, just to have a look at the famous castle ruins, where King Arthur might have been born (if he really existed, like these plans for a nuclear power plant…). It was already closed when we got there, but some parts were still accessible. 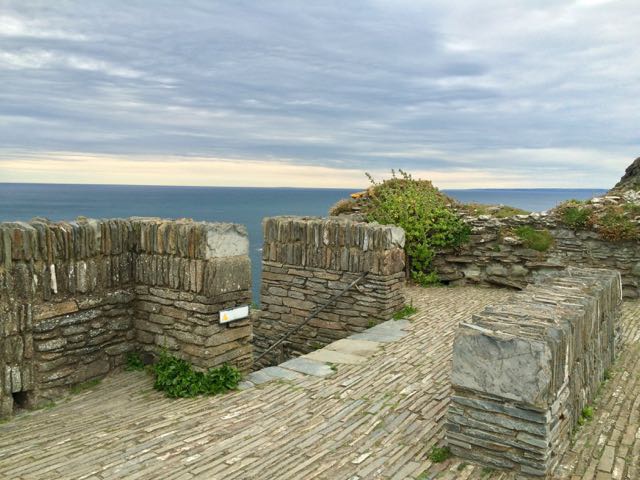 That night quite a bad storm raged across the country. Luckily we had found nice sheltered places next to a hedge, that was seperating the campsite from a sheep-run. Our tents didn’t blow away, we were fine.

The next morning we went back to the castle to have a closer look. After the All-Day-breakfast at King Arthur’s Pub. We found out that „All-Day“ means, you won’t need to eat anything else that day, not that it’s served all day.

There is not much left of the castle, just a few walls. But the view from the cilff where it used to stand is amazing, so it’s worth a visit. Also, Henry and I are now members of English Heritage and can visit all their historic sites for free for a whole year. 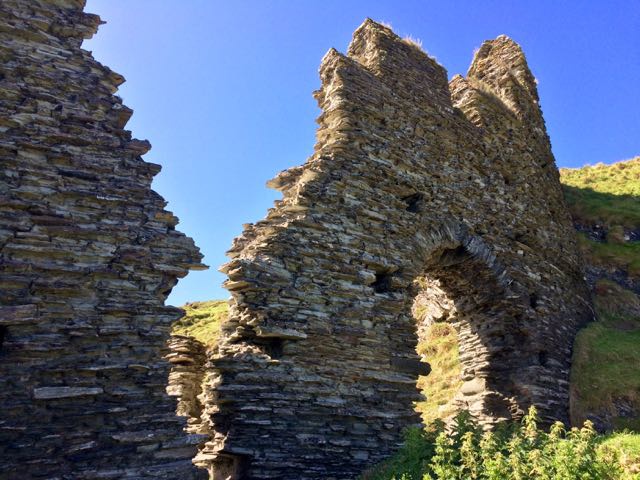 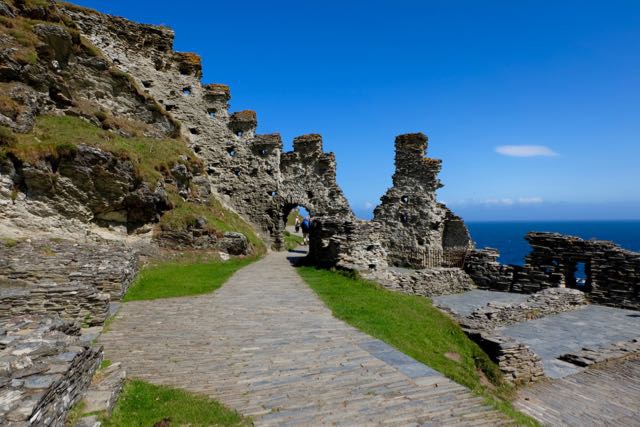 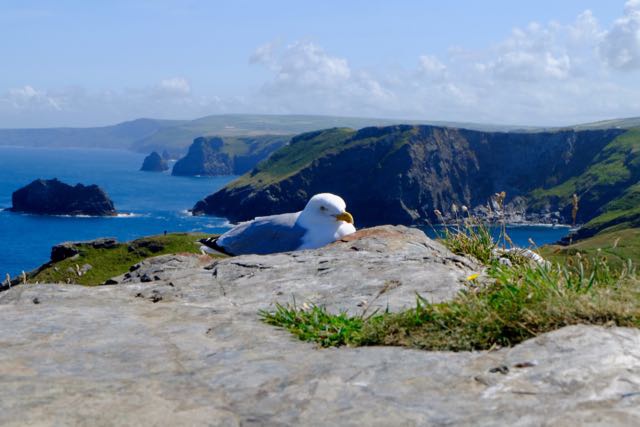 view from the castle – and a gull, apparently breeding

After that we went on walking to Boscastle. It was a „moderate“ hike according to my Coast-Path-Guide, but it felt quite strenuous. We had to go through some deep valleys between the cliffs. But it was very rewarding.

We arrived in Boscastle early in the afternoon and got ourselves the last room in the Youth Hostel. Boscastle is a very cute fishertown, very small and nestled between two high cliffs. It got destroyed in a flood 2004 but has been fully rebuilt since then. 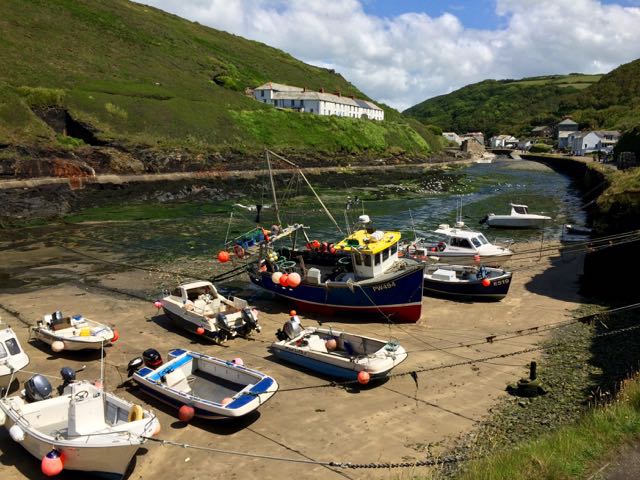 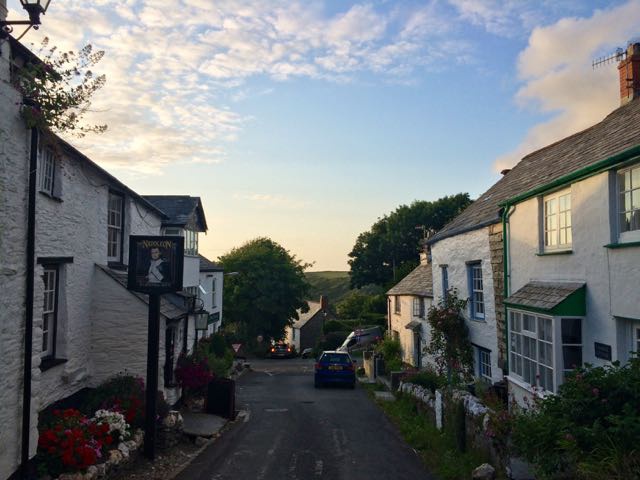 The next morning, it was raining. Not just a bit, but pouring. Since we were expecting some steep ascents, that might have been slippery, we decided to take the bus to our next destination, Crackington Haven. As soon as we entered the bus, the rain stopped and the sun got out again. We arrived in Crackington Haven before noon, in the most beautiful weather. Yes, English weather got us again, we felt a bit stupid when we called our BnB to ask whether we could do an early check-in…. Our hosts Johnnie and Annie, a retired couple,  turned out to be wonderful. It felt like staying with friends. To get our daily dose of walking, we did a circular walk that included a part of the Coast Path we would have walked, if we had not taken the bus. The wind was blowing quite strong, we had to be careful not to be blown off the cliffs, but the views were truly stunning. Plus, I finally got to see some Shetland Ponies and even an adder! 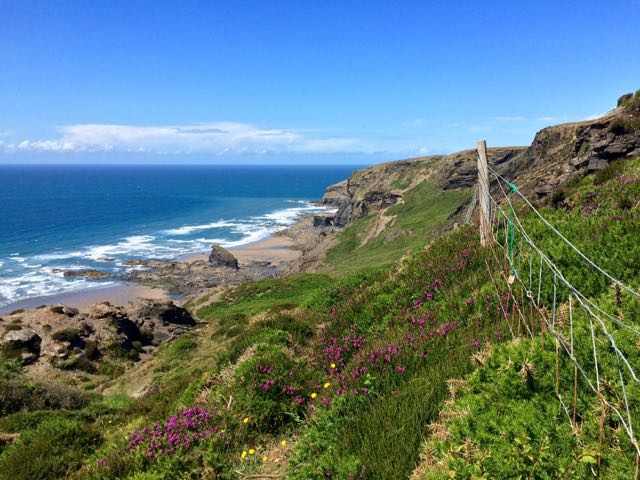 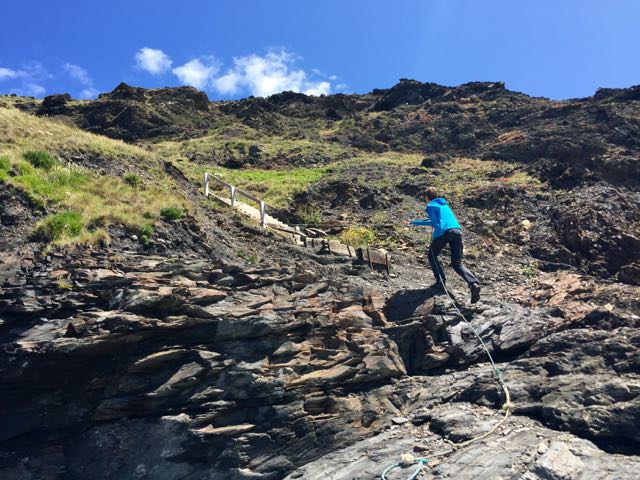 Climbing down to the beach 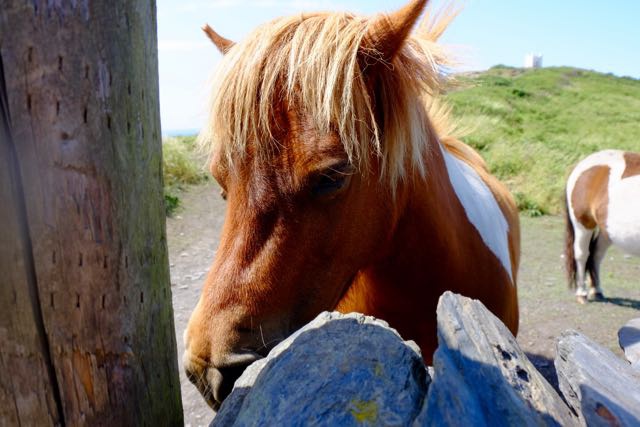 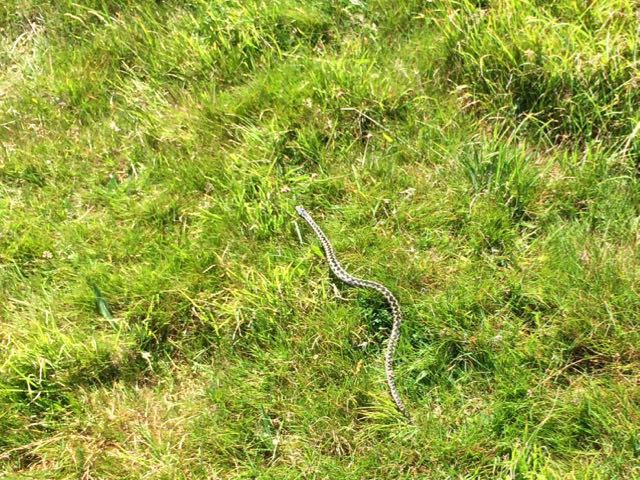 The next morning it was not raining for a change. At least not yet. We got on a bus, this time to spare us a strenouus part of walking, and got off a few miles before Bude. It was raining a bit every now and then, but not enough to be really annoying. I guess I just get used to it. The way was mostly level, so after a two hours stroll we arrived in Bude, found ourselves a room in a hostel, did some laundry, had dinner… That’s about it.

I still have no idea where we’re going to tomorrow. The next leg is remote, and really severe according to our guidebook, so not something we feel up to walking right now. At the same time, bus connections are getting more complicated and infrequent. I guess the first 10 days are starting to wear us down a bit. Maybe a short break will do us good. Also, Dennis, who has been with us for the last week, will be leaving us. So we’ll see tomorrow…