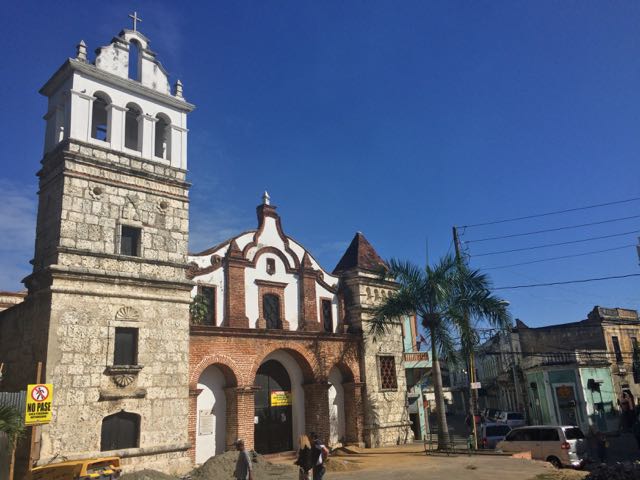 The Zona Colonial was our first stop here in Santo Domingo. While only being a small part of the town, it is probably the oldest with a great amount of historical sites to visit. Beautiful colonial style houses, churches and the first Cathedral to be built in the new world. La Zona Colonial is located not far from the coast. This part of the city reminded us of Rome or Athens.

Santo Domingo has a beautiful coastline, the zone depicted here is called Malecon, unfortunately it is full of litter and is quite smelly (like most of  the 2 Percent of Santo Domingo we saw), such a shame. In many parts of the Zona a lot of work is being put in modernisation, that’s a good thing, fixing and renewing the sewage system and taking the electricity underground (have fun with that…).

Most people here seem to live sort of an easy going lifestyle, come evening people gather out in the streets in front of corner shops and bars, listening to music, chatting, playing chess, dominos, cards, and even singing and dancing.

The town seems to be quite safe and never have we had the feeling it could be dangerous, only once when somebody suddenly stood in front of me with a pump gun, but that was a security guy and was actually in Bavaro.

Still caution is advised. As in all big cities. Traffic seems particularly dangerous, there are basically no rules. Traffic lights are rare and mostly ignored by cars and pedestrians alike. In this regard we were reminded of Adis Abeba, also the public transport system is quite similar, consisting mostly of old medium sized buses, the guaguas, with the cashiers shouting out the destinations. The vehicles were considerably newer than in Adis, though.

We  have put together a small gallery to give you an impression.