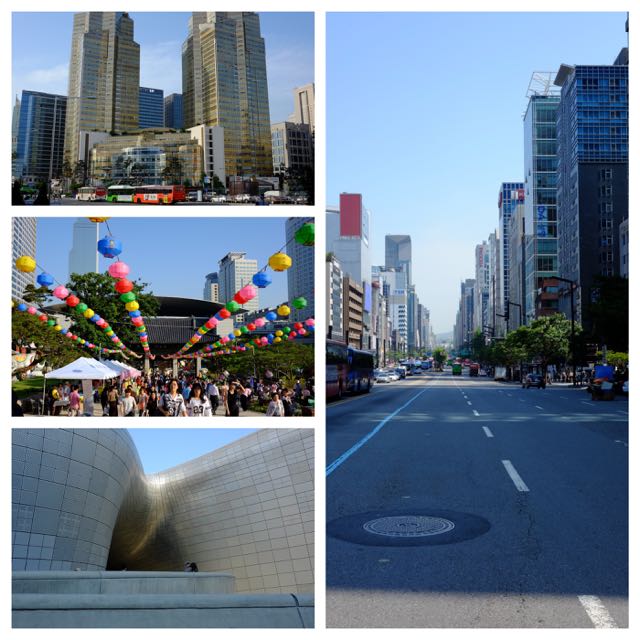 Visiting Seoul was the perfect end to our trip through South Korea. This city is like a melting pot, where all that we’ve learned and seen while traveling Korea, its history, tradition, nature and modern life come together: You find historical sites, temples, palaces located in the middle of skyscrapers and modern architecture, latest technology, great shopping opportunities… And if you’re getting close to a sensual overload you can find more or less peaceful retreat in the nearby mountains, like on a hike around the old Fortress Wall (although there are crowds, too, on weekends, if you want some peace and quiet it’s better to go on weekdays I guess…) The only thing missing in Seoul, that Busan offers, is beaches. But hey, who wants to lie around in the sand when there’s so much to see and do?

Hiking the old Fortress and City Walls, for example, wonder if the Dongdaemun Design Plaza looks more like a giant silver blob or an alien space ship, wander around temples, palaces, and traditional neighbourhoods, and of course go on shopping sprees: around Myong-dong, Hongdae and around Ewha Women’s University (this university is also worth a trip just for the amazing architecture), in Dongdaemun’s markets and malls – and in subway stations.

We were quite amazed by the things the “underworld” of the subway had to offer (not only in Seoul, but in other Korean cities as well): From pieces of art, small stalls selling clothes, books or food up to whole shopping malls, where you get the best bargains (I can recommend Gangnam or Jamsil for example). We even found a replica of the Trevi Fountain in Jamsil station. Compared to many subways in Germany, the trains and stations are also remarkably clean.

Subway stations also seem to serve as shelter, in case crazy Kim up north really starts pushing his buttons. We saw a lot of “shelter” signs in front of the entrances, and even some pretty big blast doors. These let you glimpse behind the fun and crazy facade, onto the constant threat the people have to live with and the tragedy of being a divided country after so many years. The people are admirably optimistic, though, that this will change eventually. Being German I can really empathize with that. One of the weirdest and most moving experiences was certainly being congratulated to my country’s reunification.

Traveling Korea has been quite easy. The people are very helpful, whenever you only look like you could be lost (like when you’re staring at a map or your mobile phone for just a few seconds), someone will come up to you and offer help. Even if communication is limited to using hand and feet. When arriving at the metro station close to our accommodation in Seoul for example, an elderly woman of maybe 60 years or so asked where we wanted to go. When we showed her the address on our phone she started walking – no, running actually – up the steep way indicating us to follow her. Keeping up with her pace was quite difficult for us, carrying all our luggage… But she brought us nearly in front of the doorstep to the place we were going. A few days later, while hiking the Fortress Wall, a fellow hiker we passed asked if we wanted a drink. So we had a cup of his coffee together. He spoke nearly no Englisch, and our Korean was even more limited, but we could exchange where we came from (he lived in Incheon actually) and he told us, that it’s apparently better to drink hot beverages than cold when walking in warm weather.

Not only the people, also technology makes getting around in Korea a piece of cake. Just get yourself a T-Money card at any of the typical convenience stores (7 eleven or GS25 for example, which are literally at every corner) and charge it with some cash. With that you are good to go around any city, town or village in South Korea. We were told that you can even pay taxis with these cards, but never tried that – with public transportation being omnipresent, even in remote areas, taxis are simply superfluous. I have always regarded the German public transportation system as really good, especially after getting around the United States in busses. But in comparison to Japan and Korea, German trains and busses appear almost antiquated.

Korea has been a great trip. We came with no expectations, since we knew little more than what’s on the news. It turned out to be a colorful, kind, exciting place with lots of high-end-technology, but also character, history and culture.

Some impressions of Seoul: