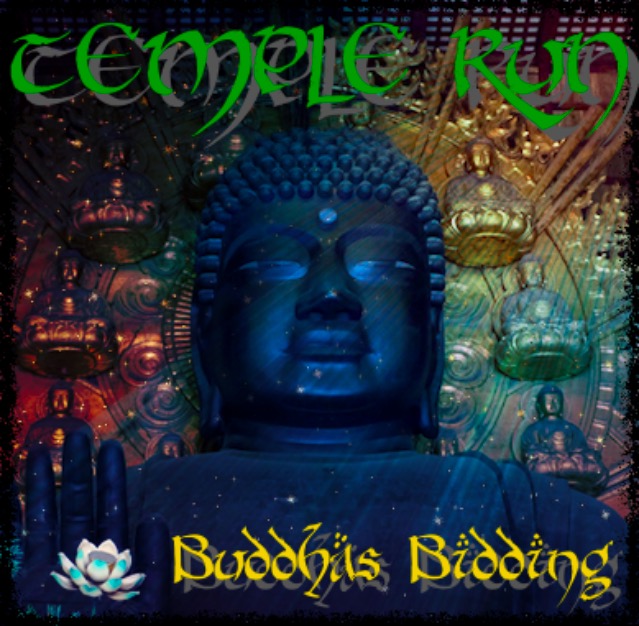 Out now, the new real-life version of Temple Run. Your mission: see as many temples, shrines, gardens and groves as possible in Kyoto and Nara. We gave it a try. Here’s what we found:

Level one: The Southern Higashiyama Walk

First challenge: Wandering around crowded Kiyomizu-dera. We won a bonus and got a free tour by three Japanese girls, students from Osaka who want to practice their English by guiding foreign tourists. We mastered the walk through pitch black Tainai-me-guri, and by doing so symbolically entered the womb of a female Bodhisvattva. Touched the stone that appears suddenly out of nowhere and hopefully will be granted a wish for that. The next challenge is not getting lost in the crowds in the Sannenzaka and Ninenzaka streets on the way to Maruyama-koen park. Here you can hang around and have a look at the most famous cherry tree in Kyoto (which wasn’t in bloom, unfortunately). From there it’s only a short run to the Yasaka-jinja shrine, which was partly under construction. But we got to see a wedding. Next it’s on to Gion for the next challenge: Spot Geishas. There are a lot of them around. Or girls, who just like to dress up like them, you can’t really be sure… After one day, we had unlocked Level two.

The Challenge: Pass through a thousand gates and by thousands of small shrines to climb up four kilometers to the top of Mount Inari. The hardest part were the first few hundred meters, because it’s crowded. The further up you go, the less people are around. Making it up and down again is key to unlock level three.

This challenge is something we are used to by now: Escaping the crowds. We chose the way alongside the river, which gives you a rewarding different view of Kyoto. Then it’s on to the famous Bamboo Grove. Which is quite nice, but again – you’re not exactly alone.

Next challenge: Buy some deer biscuits and feed the deer. But be careful, don’t forget your mission over their cuteness. Also, there a some nasty buggers among them, who get really pushy when they see you’ve got biscuits and may even bite… So try to get back on your way to find the beautiful Yoshiki-en and Isui-en gardens. Wander around and go on to Todai-ji temple. Don’t miss the massive gate, the Nandai-mon, which is guarded by two fierce guardians, the Nio. Once you’ve made it passed them, you continue to the great Buddha Hall, the Daibatsu-den. Watch out for deer on the way! Go into the hall and face the Great Buddha and his companions. If you’ve made it through, you continue to Nigatsu-do. The challenge: get up the long, steep stairway to the verandah. Your reward: stunning views. After that, you go on to the Kasuga Taisha shrine, where you’ll see thousands of lanterns. If you’re lucky, you get so see them lightened during Lantern Festival, but it’s a stunning walk anytime. Last challenge: Finding your way back to the train station. Easy.

Our resume: Really great designs, some nice gadgets, surprising easter-eggs and special effects. A lot of fun challenges, some of them kind of demanding and exhausting. Definitely recommend it!