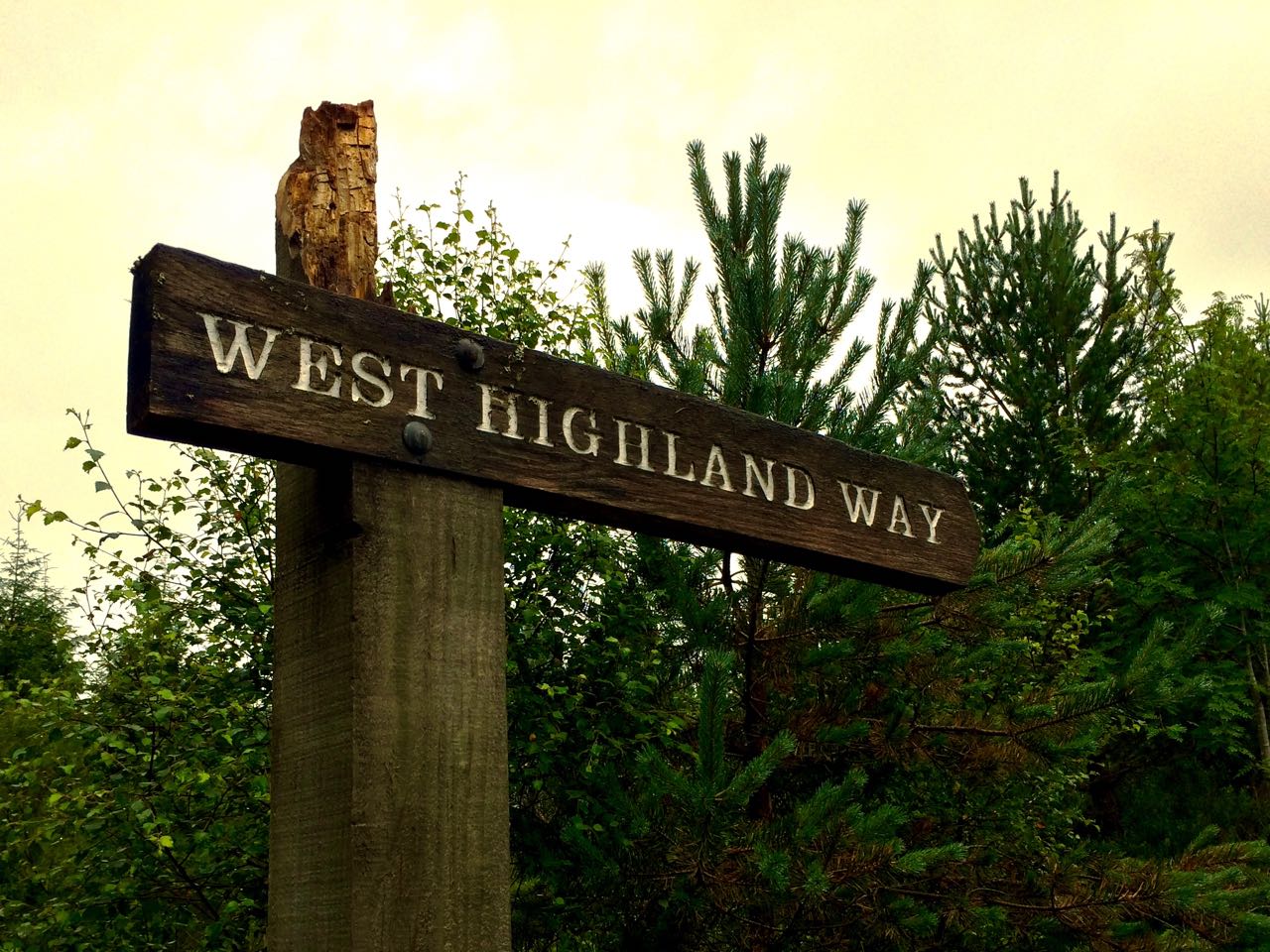 We’re back in the wild. This time we are walking on the popular West Highland Way. Got on a bus from Glasgow to Inverarnan, where we stayed in a nice small lodge on a campsite. And since we’re walking again, the weather changed, of course. We arrived in pouring rain. The next morning was grey, but dry at first. The forecast had announced showers during the whole day. So we prepared. Got on our rain coats on and the rain covers on our backpacks before we set off. We weren’t the only ones walking the way, we recognised when we walked off from the campsite. It felt like a big migration, groups of walkers where starting on the way every five minutes.

The way itself was mostly unimpressive, at least the first half We passed a huge construction site, walked a long stretch of the way under or next to high voltage lines and were never far from the busy A82. The second half was more pleasant, we had to climb a little ascent, not too bad, but recognisable and could have been rewarded by nice views if the weather hadn’t been so bad. We did get caught in some lighter showers every now and then, and the clouds were hanging low, obscuring the view on the surrounding hills. At least we didn’t get completely soaked like we did on our last walk on the Dales High Way – just the last 20 minutes or so the rain grew stronger and more annoying. So we hurried and reached the campsite in Tyndrum in just under five hours. For twenty kilometers, I guess that’s’ not too bad. All the walking we had done so far must have somehow paid of, we had also overtaken a lot of other walkers on our way. We had just entered the tiny reception and shop on the grounds when a heavy shower and a real thunderstorm started. We called it a day and tried to dry our boots in our cabin. Later that evening we saw some hikers with tents being turned away, because the tent side was flooded and considered ourselves lucky for having pre-booked the cabin.

We also made the acquaintance with the common highland midge, very small, mean, blood-sucking beasts. Henry is being eaten alive by them, they seem to love him. As for me, I am lucky, they usually spare me.

The next day started grey as usual, but dry. According to the forecast it was supposed to stay like that the whole day. The next stretch that awaited us would be 32 kilometers long. Too much, we decided, and luckily there was a train running from Tyndrum to Bridge of Orchy, which was exactly on the path and only 21 kilometers from Kingshouse, our next destination. When we started walking around noon in Bridge of Orchy the clouds still hung deep. But this time it cleared up, and we were rewarded with sunshine. The path lead us across high moorland, next to the Rannoch Moor, an impressive, marvellous and remote expanse, the largest uninhabited area in the UK actually, and towards the mountains of Glen Coe, which looked glorious in the sun, that finally made it through the clouds. All in all, one of the best walks so far.

We arrived in the early afternoon at the campsite where we had booked a hobbit house – a cute, tube-like little lodge. We’re going to stay here for three nights and do some day hikes around.