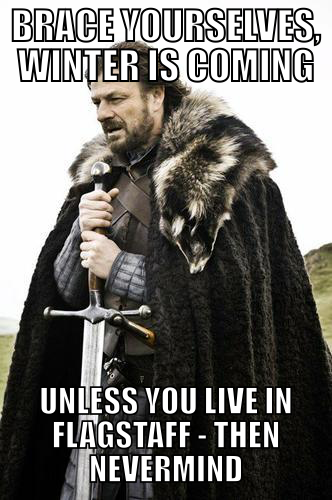 Flagstaff, so much potential, such a shame.

We planned three days in Flagstaff, just enough time to explore the town, drive to the Grand Canyon and enjoy the local food. We arrived in the evening, went for a really good pizza and then hit the sack early in our Motel, to be well-rested the next day when we had planned to visit Grand Canyon.

But Flagstaff didin’t want us, the next morning the weather started changing for the worse; hail, rain, winds, meteors, cats and dogs, all hell breaking loose, well maybe not quite that bad, but bad enough.

So, we didn’t hire a car due to bad weather conditions and instead we went to the historic centre, plenty to do and explore there. Found a nice shopping mall with small eateries inside. The downside, everything you buy smells of BBQ. (Which normally isn’t a bad thing.) Later we went for a fantastic Burger to a place called “Diablo Burger” downtown.

Next morning, hoping for better weather so we could drive down to the Grand Canyon, naa forget it, almost 2 feet of snow.

Fought our way halfway back to the historic centre for a coffee in a nice dog-friendly café we found. They had turned their walls into memorials for their costumers’ dogs that had died. By now it’s noon, checking the weather we found it was only going to get worse, a lot worse.

Enough’s enough, we’re getting the hell out of here before Greyhound grounds us. Changed our bus tickets, checked out early and bye bye Flagstaff.

Oh, before I forget, here we had the worst motel of our trip. The L Motel, L must surly stand for LOUSY !!!

and as always some pictures…