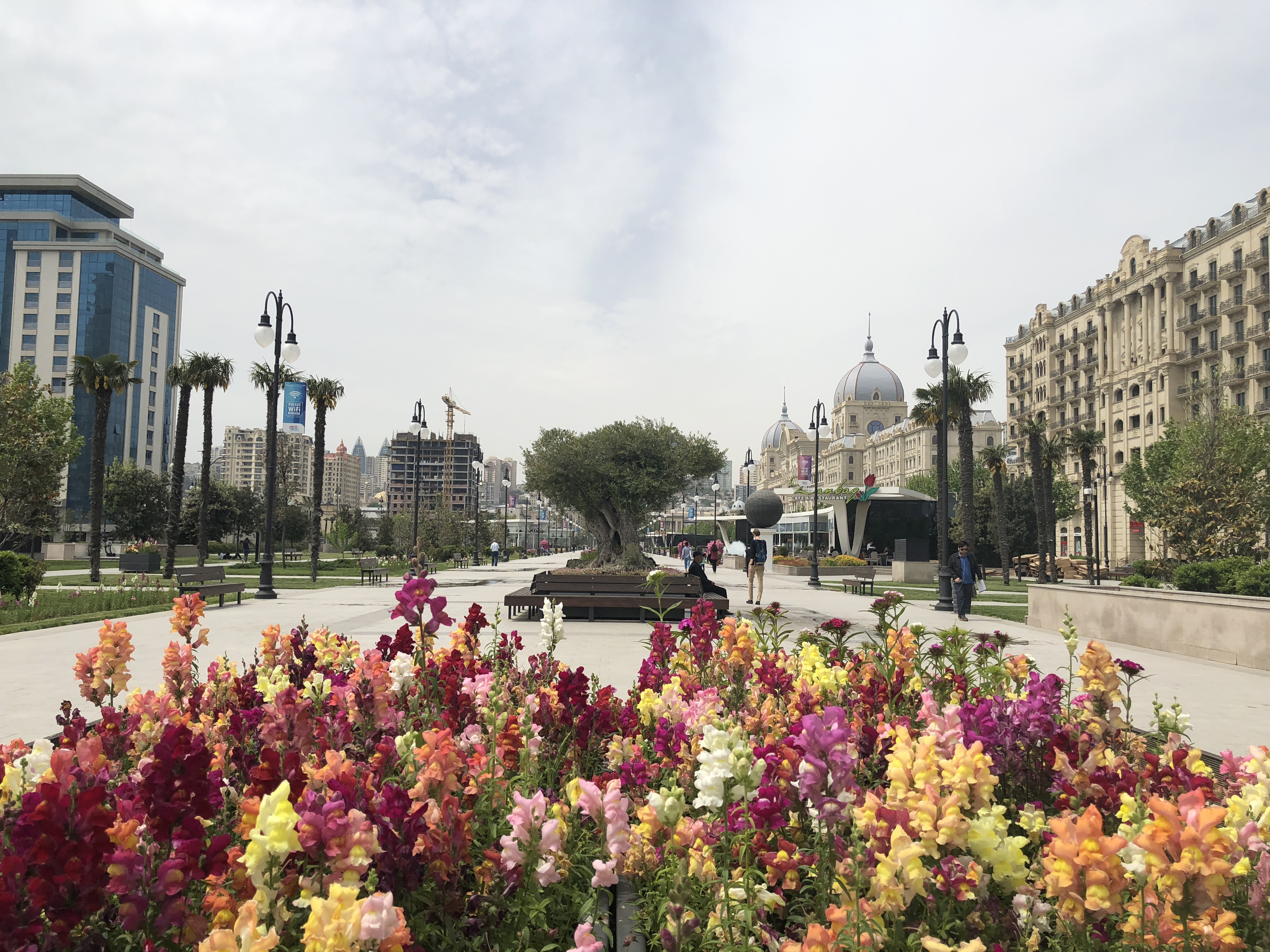 Baku was definitely a surprise for us. We didn’t quite know what to expect before we arrived, and imagined it to be a bit like Dubai. Glitzy, modern, rich from all the oil money. And it did smell a bit of oil everywhere, we found. But the city itself felt much more European than expected. Lots of 19th century historical buildings, huge squares, nice cafes, and a wonderful, charming old town.

Get started: How to get a sim card in Baku

Getting a sim-card is pretty straight forward. Find a AzerCell or BacCell store, plenty around, and ask for a sim, they will do the rest for you. We went for the AzerCell-Sim which costs a little more but is also better, we were told, and at 20AZR, about 10€ for 10GB (data only) is more than enough for us. We’re actually using one sim for all our devices using the Hotspot feature on our phone. You will need to show your passport.

So what is there to do and see?

The petroglyphs of Qobustan

The first day, our AirBnB host Lala had organized a tour for us. First we went to the ancient petroglyphs of Qobustan. It’s a good idea to visit the museum first, where a guide will explain the different meanings to you. Even if you’re not too keen on history, this is a nice trip into the semi-desert. We just don’t recommend summer-time, since it gets unbearably hot. 40 degrees celsius are not uncommon, we were told. We visited the site in the beginning of May, and it was already 30 degrees.

After we had deciphered all the oxen, goats, hunters and dancers on the walls, our driver took us to a moon-like landscape with funny little mud-vulcanos. When you take a closer look, check for the direction of the wind. It can get windy out there and you don’t want to get a blubber of grey mud blown all over you!

Azerbaijan means land of fire, and we were going to find out why next. In the Fire Temple of Ateshga. An endless fire was once burning, a place of worship for Zoroastrians. The temple was built by Hindi from India. The endlesness was brought to an end when the gas pressure sank due to the eploitation of the natural gas for commercial consumption. The fire is now created artificially by natural gas – what else.

Last attraction on our tour was the Yanar Dag, a natural fire coming out of a rock. When we were there,  a group of Indian tourists who had arrived by four buses had just crowded the site and started grilling Marshmallows over the holy fire, So we didn’t stay long. It’s quite nice, but, well, it’s just a fire from natural gas coming out of a mountain site…

We  spent  our second day exploring the city. Mostly in old town. If you’re interested in modern architecture, you’ll be excited to visit places like the Carpet Museum, Flame Towers and other modern buildings, but we were quite content with walking the shaded, cobbled streets in old town. Stop at a cafe or two, have tea and some azeri food. We loved the Pomidor Yumurti, scrambled eggs with tomato and Bread. It became our favorite food in Azerbaijan. Simple, cheap, and delicious!

Unfortunaly our schedule is a bit tight, Baku has a lot more to offer than we have time for. We loved the atmosphere in Old Town Baku and could easily have stayed three more days or so.

We will add an album when we’ve had time to go through all our pictures.