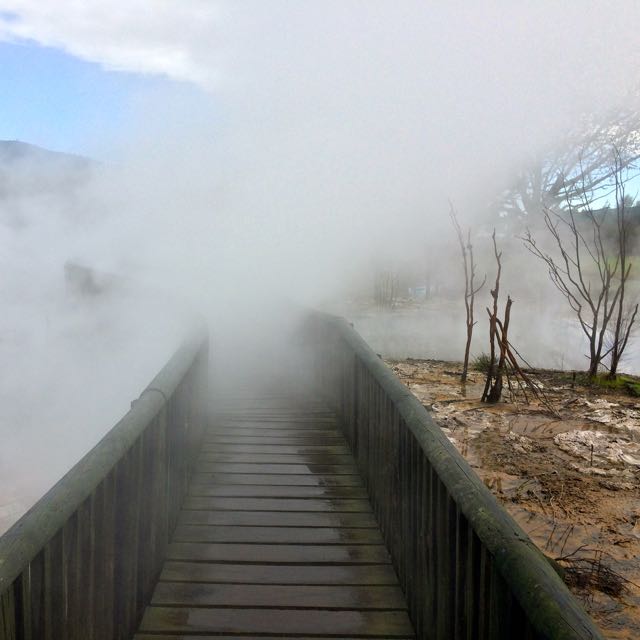 We arrived late Saturday evening at a campsite next to an aerodrome, the starting point for scenic and skydiving flights. We sort of crashed the campsites owner’s birthday party. A good time to arrive, he was already a bit tipsy and in a real good mood, so we got laundry service for free.

The next morning it started raining again as soon as we got on our way. We originally wanted to take the tour through Hobbiton, but that’s something you should definitely do in the sunshine. So we drove to Rotorua instead (we’ll stop at Hobbiton on our way back then) to watch the geothermal activity sites, which were supposed to be especially impressive during rain. It didn’t rain anymore when we arrived and after a few hours, the sun actually came out. We decided to stay for the night and have a closer look at the town. It’s quite nice to look at, all these natural hot lakes and bubbling mud pools in Kuriau Park, and it’s free (that’s something you really learn to appreciate in New Zealand…) The yellow – orange – brownish colours at the lakes’ shore and the mist make it look almost surreal, like you’re in a different world. Like Mordor, I guess. The downside, it smells quite badly, like rotten eggs. Basically everywhere in the town. In the evening we had dinner at a pizza place called „Hell“, which we thought to be appropriate. Not for the pizzas (they were ok, not bad; still, we’ve had better…), but for the overall setting.

Some pictures out of Hell: