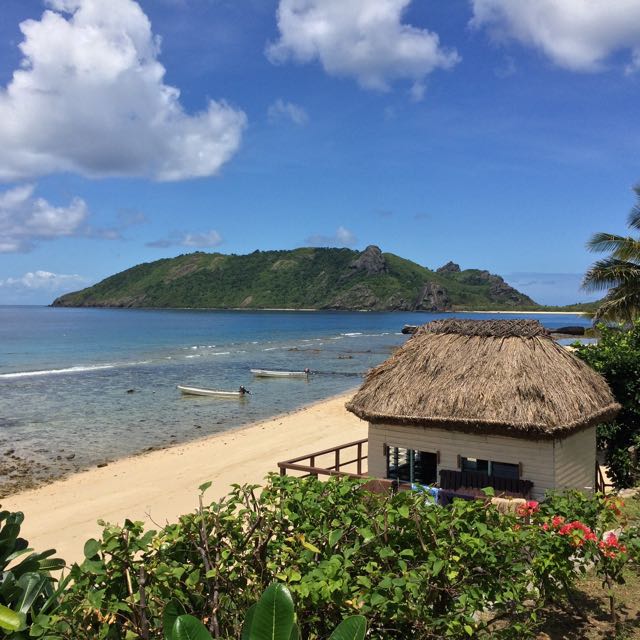 We’ve been away for a week now, really away (no internet anywhere, at least no decent connections…). So a lot of time for different things. Like lying around in hammocks, taking walks on the beach, snorkelling, swimming. Stuff like that.

We visited two of the remote Yukawa Islands. The first three nights we spent on Wayalailai, a two hour ferry ride from Nadi. A small motorboat picked us up from the ferry and brought us to the beach, where our accommodation was located. We were greeted with singing and lots of friendly „Bula!“s, which would follow us through our whole stay in Fiji. We stayed in a small backpackers’ resort, where we got a bure right next to the beach. The days were basically structured by the mealtimes, which would be announced by the beat of the Lali, a wooden drum: Breakfast at 7:30, lunch at 12 and dinner at 7. There was also a teatime around 3, or 3:30 (Fiji time, so you never really knew when exactly when). Something the British obviously had successfully implemented… After dinner the staff usually did some kind of performance, singing or dancing, which would always end with the guests having to join in and / or drinking Kava with them, a traditional Fijian drink made of a root that is powdered and then mixed with water. It is supposed to have a relaxing, slightly numbing effect, but we never noticed anything, apart from a slight tickle and numbness of the tongue. It also tasted quite weird, but we drank it anyway, out of courtesy.

We passed the daytimes by playing volleyball (never stood a chance when the locals joined in), hanging around in hammocks, or going for walks on the beach – only short walks, since the beach was not very long, you could walk maybe two minutes to the left and ten minutes to the right. But that didn’t really matter. We met a lot of different backpackers who travelled long-term like we did, so we got a lot of ideas where to go and what to do for our upcoming destinations, and made some new friends. It was the perfect location to get used to doing nothing and enjoying a peaceful laziness.

The highlight of our time there was a snorkelling trip to a reef around 20 minutes from the island, where we encountered some reef sharks. They were quite tame and came really close.

One thought on “Bula Wayalailai!”