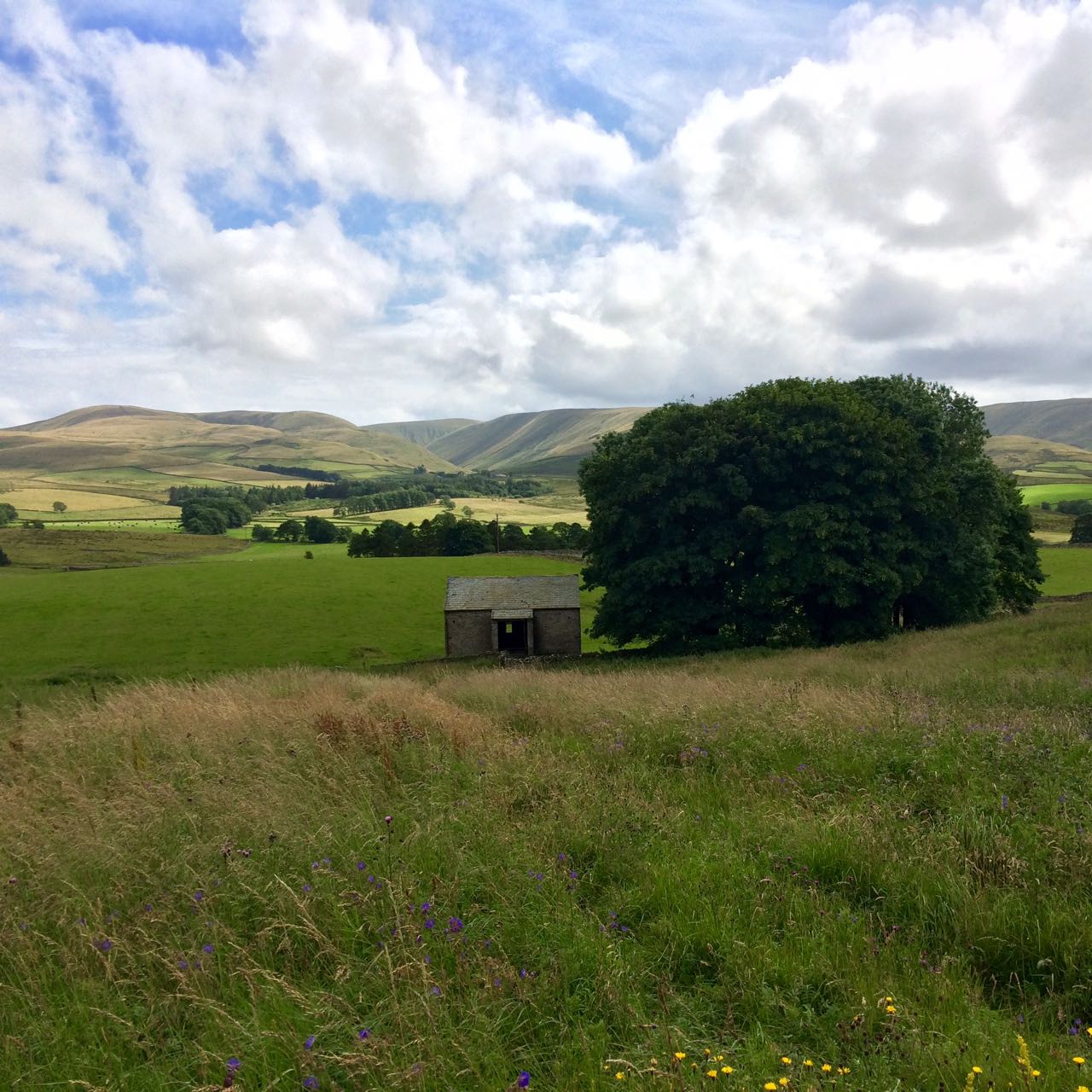 From picturesque Dent we went on to the next cute town, to Sedbergh in Cumbria. It’s apparently England’s official book town, you find a lot of independent and second-hand-booksellers. The landlady of the BnB we stayed in, Sue, a nice elderly lady, also used to have an antique shop up to a few years ago, where she sold „quirky things for quirky people“. Now, she rents it out.

The path to Sedbergh was rather unimpressive, and quite short – not even 10 kilometers. But as we said, we didn’t want to repeat the mistakes we made on the Offa’s Dyke path and take it more slowly. We had to rest to prepare for the next day’s hike across the Howgill Fells.

Now that was a hike after our fancy, one that rivalled the Black Mountains. If there had been some wild ponies, it would have been our favourite hike so far in Britain. Green, gently rolling hills, scarce landscape that didn’t obstruct from the magnificent views on the surrounding hills. Shortly before we reached the Calf, the highest peak of the Fells, a cloud swallowed us. It rained a bit on us, but only for ten minutes or so, then the sky cleared up again, although the sun didn’t make it completely through the clouds all the time we were walking in the Fells.

After reaching the Calf we somewhere must have taken a wrong turn and ended up on a path leading through the valley next to a river rather than on the top of the ridge. But that didn’t lessen the beauty of the walk at all. Only the last part of the walk, when we had left the hills behind us, we had to cross a few fields and walk through the inevitable mud – that spoilt the experience a bit. We got to a BnB in Newbiggin-on-Lune, a village so small it doesn’t even have a pub – but our landlady was happy to drive us to Ravenstonedale where we rewarded ourselves with a slightly posh two-course dinner.

Unfortunately, our last stretch through this part of our journey England didn’t end well for us. We started in rain and it practically didn’t stop all the way. Actually, even waterproof shoes and jackets will eventually let water through, we learned. We also learned, that completely soaked socks and shoes have a similar effect like a wetsuit: the water in the socks gets warm has an isolating effect. It’s not as bad as I had imagined before…

We had hoped to rest at a pub in Great Asby halfway on the route, the Three Greyhounds, but it was closed when we arrived – it only opened in the evenings. We asked a women passing by, whether there were any alternatives, tea houses, pubs, anything – there weren’t. A bus maybe, to take us to the next village, preferably Appleby? “Yes, there is one, on Fridays.” So we found shelter in the village’s church, which is quite beautiful. Squeezed the water out of our socks and waited for half an hour for the weather to get better. It didn’t, really. But the rain got lighter, and when it was only a drizzle we dared to go on. And we didn’t get soaked like in the morning, at least, but didn’t really get a chance to dry either. Ironically, the sun came out as soon as we reached Appleby-in Westmorland.

This was our last hike in England – next destination Scotland (starting in Glasgow). But at least we walked it faster than any other hike so far…


We shot only very few pics on the way, not really in the mood for that…