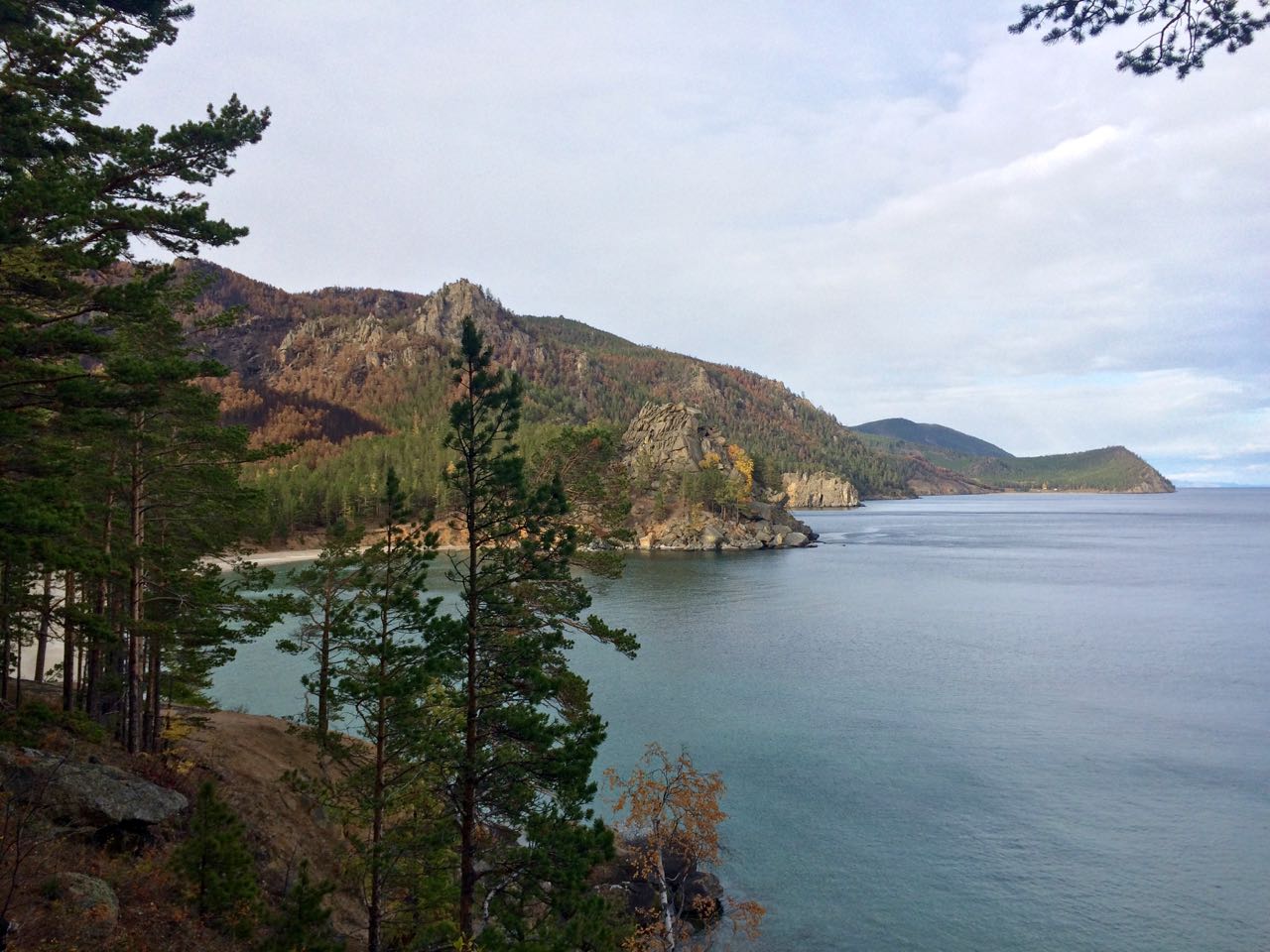 A great and exciting trip with Anton our guide, thank’s Anton!

So after that cultural shock in Novosibirsk we had booked a tour to the Baikal lake to get back to nature. Just the thing we needed. The train ride to Irkutsk was our longest so far – 31 hours. We started at six in the morning and arrived at three in the afternoon the next day. But it wasn’t so bad, half of the time we had the compartment to ourselves.

When we arrived in Irkutsk it was raining. And freezing cold. And the next morning, when we were ready for our tour to begin, it hadn’t changed for the better. It was still raining and cold when our guide Anton picked us up around ten.

Lucky for us Anton spoke excellent English, a fact that made communicating a hell of a lot easier to what we had been used to lately. Anyway, after a few hiccups starting his 30-year old Toyota Land Cruiser we where on our way to Bolshoe Goloustnoe at Lake Baikal where we would switch to a small fishing boat for the rest of the trip to our final destination, a small “Cabin in the Woods”. Actually it wasn’t really in the woods but by the shore of Lake Baikal.

This part was already quite adventures, the road conditions started out ok but deteriorated rapidly. Finally the road as we know it ended and we made our way through the forest, ups and downs tilting and swaying on our way, quite extrem driving, luckily Anton is a great off road driver, I’m pretty sure I wouldn’t have gotten through that forest never mind with what kind of vehicle. The last few meters we had to pass a more or less private property, where Anton would normally leave his Toyota for a couple of days, usually no problem. But on this day it seems the owner was in a bit of a bad mood. So our guide had to drive a little further, through parts of the lake and round a small boat that was in the way of our next parking spot.

We arrived at our final driving destination, where we where supposed to be picked up by the fishing boat. No boat to be seen. No problem, we still had plenty of time as we had planned to have lunch by the lake before continuing on our trip anyway.

So our private Master Chef for the next few days (Anton) got a fire started and fetched some water from Lake Baikal which as you all know is the worlds largest sweet water reservoir. And cooked us coffee and a hearty soup. There has been a Police (?) boat cruising along the shore for quite a while now. More about that later.

Still no sign of  our boat, getting a little worried. By know we are also out of reach of any kind of communication. The bright side, the late afternoon makes good light for taking some pictures.

It’s about now that we found out (from another fisherman passing by) that the Police boat was actually a rescue boat with scuba divers looking for the remains of two fishermen that had drowned just a few days prior to our delicious meal and coffee made from the same water… Strange thought, but still, the fishermen had the worse ordeal.

Starting to get a little chill, another passing fisherman told us our boat is soon to come, he had a lucky day and caught a lot of fish that needed selling before he could pick us up. That’s ok with us. So we just waited a little longer. It didn’t take too long after that and our boat came to pick us up and took us over the Lake Baikal to our cabin, where the stove had already been lit and it was nice and warm. After we had settled in, MC (Master Chef) Anton gathered some dry wood and sticks for a campfire on which he prepared a tasty stew with noodles and sausage for dinner. After enjoying our meal we sat around in the cabin for a while chatting until it was time to call it a day. 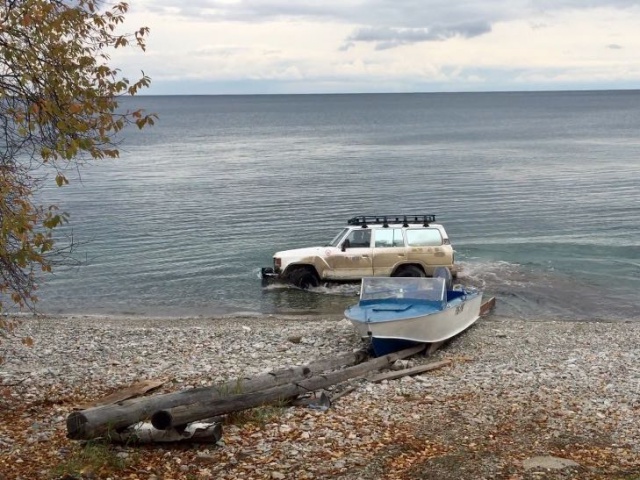 The night of the living dead

It was roundabout one in the morning when Anja started hearing strange noises. Bears? Wolves? Monsters? After all it was full moon, blood moon to be exact. So brave as I am I got up and went hunting for the monster. After not finding anything I went back to bed, and the weird noises started again. This time they sounded much closer, seemingly coming from inside the hut! There was no electricity in the cabin, so I grabbed my torch, but left it turned off and prepared myself to jump it. Then I heard it again, I switched on the torch and in that moment, frightened by the light, the  mouse ran back behind the oven. Mystery solved, back to bed.

After a good nights sleep MC had prepared breakfast, fresh bread we had bought on the way, a selection of cheese, sausage, porridge, fruit, coffee and tea.

Time for a hike along the shore and through some forest and up a rock to a grotto, from where we had some great views over Lake Baikal and the surroundings. On our way back Anton collected some Birch rind. He explained to us how Birch rind was great for starting fires, even if it wasn’t very dry. There is plenty to be found in the woods. Anton made his way back to the cabin to start preparing lunch while we continued strolling through the forest for a while before returning to camp where we enjoyed a fish soup made from fresh indigenous fish called Omul, which was very tasty.

Later on we went for our next hike by boat. This time our fisherman was punctual. After an approximately 20 minute boat ride we came to a bay from where we would climb a pretty steep (for us anyway) mountain to a great vista point. A bit tricky at parts but we managed quite well. Time to take some more pictures and enjoy the views.

Back down was even trickier, but we managed that, too.

On the way back we came past a walking trees (Ents?) and a closed holiday resort (out of season). We were quite lucky with the weather, sunshine all day and quite warm (well, for Siberia anyway).

Backt to the boat for another fun ride over Lake Baikal back to our camp. Back at camp a Russian sauna, the Banya, was waiting for us, this is the place to relax, sweat and get cleaned up. So after some sweating a – very short – jump into Lake Baikal brrrr freeeeeezing and back into to sauna, got clean and back to our cabin which was only a few steps away.

Our dinner tonight was a meaty rice stew prepared by our private chef. Time goes by really fast, too fast actually. We spent the rest of the evening with Anton chatting about all kind of things, Anton has quite some stories to tell.

P.S.  We left some food for the mouse, so he doesn’t need to scavenge around all night. Worked pretty well. No monsters… 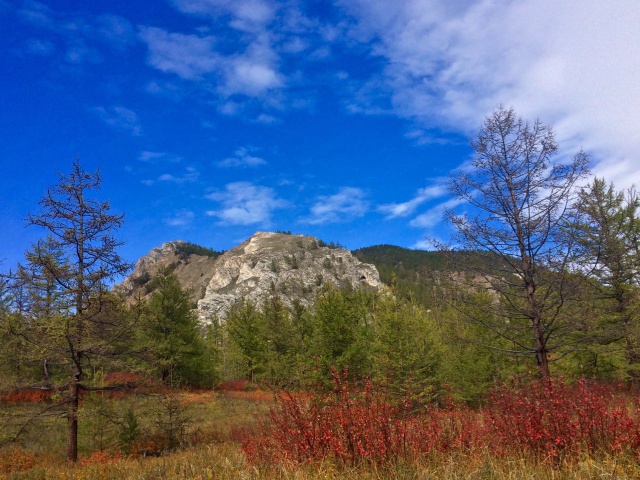 Weather has changed for the worse, pretty cold and windy. Even snow. Fortunately there is nothing planned for today as we are leaving.

After breakfast we packed our stuff and put on our life jackets which we by the way always wore on the boat. Lake Baikal can be pretty dangerous. Last ride back to the parking spot of the Land Cruiser which was acting up a bit, again. Anton and the fisherman soon sorted out the problem (they changed the battery, luckily we had a spare one on the boat to get the engine started) and we where on our way. Back through the Lake and over the “more or less private property” mentioned earlier on. The owner thought it would be a good idea to charge Anton for parking the Toyota on what was absolutely not his property, just imagine, after not letting him park on his property, and locked the gate so we couldn’t access the path through the woods. Anton soon sorted him out after telling him that the Toyota would have no difficulties driving straight through his fence. Her preferred to open the gate and let us pass.

So we where back on schedule through the woods for a breakneck off-road experience. Must say off-roading is fun. Wouldn’t mind trying myself some day.

We stopped for lunch at a nice place, before continuing our way to our next destination Listvyanka, where he helped finding our hotel.

Anton was a great guide and fun to be around, we learned a lot about life in this kind of place, some survival skills, and Russia in general, so we can only recommend a Baikal Adventure tour. He also offers other excursions to take part in. 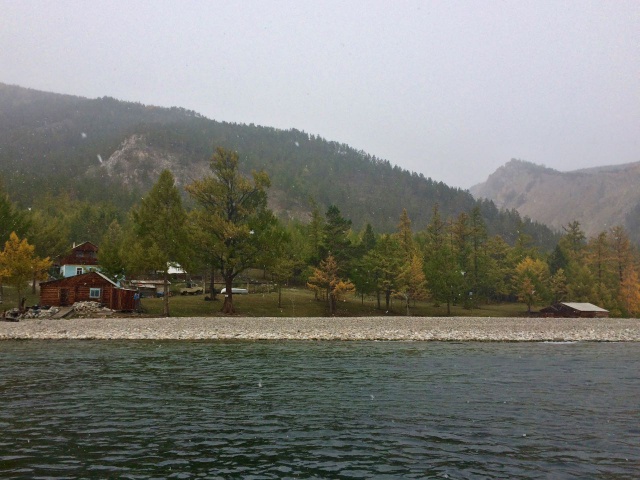 The friendly and cute dog in the pictures probably belongs to the guy causing trouble, poor dog.

The dark patches in the forest a where forest fires have destroyed the trees.

Sorry for the long text, and there’s me always telling Anja not to write so much ;o)

So here are at least a lot of pictures to make up for that: