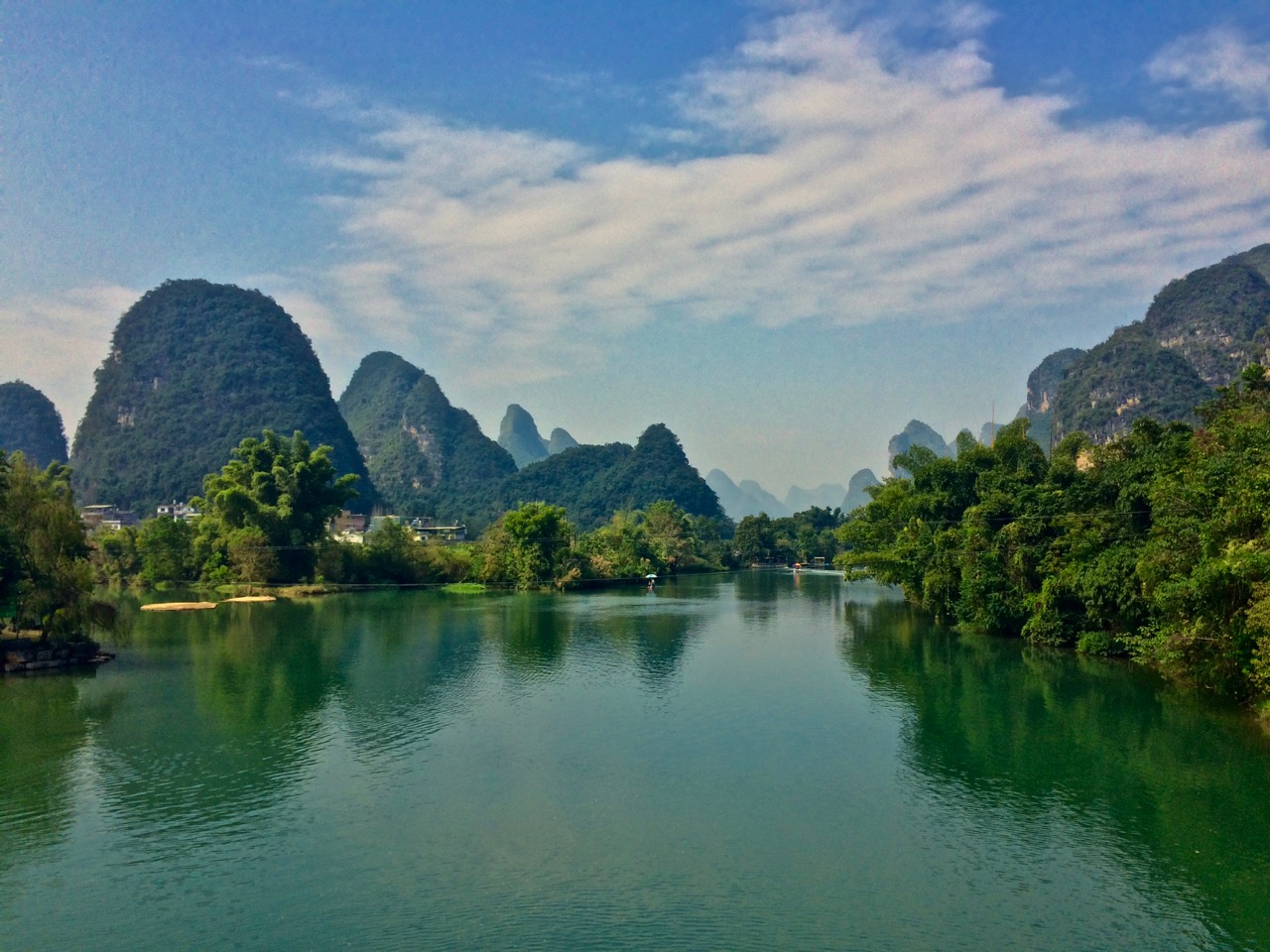 Yangshuo in a nutshell

Feels like: Palma de Mallorca in the village center. Paradise in the countryside, on a sunny day.

What to do: cycling, rock climbing, hiking, going on river cruises and bamboo raft cruises. But all that is more fun when the weather is nice.

Where to stay: We stumbled upon a real “Fawlty Towers Hotel”! If we had known that before, we definitely would have booked there (well, at least one night…)

Where to eat: West street, the epicentre of entertainment, food and drink. Or go to the Chun Ji branch for damn good Chinese BBQ goose 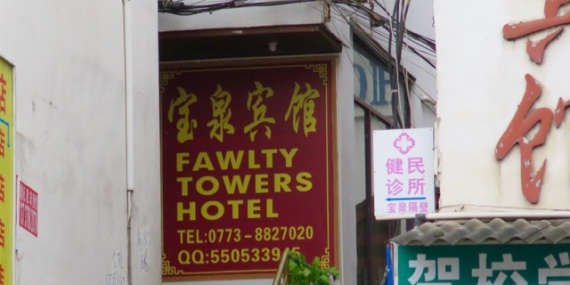 Yangshuo in the Guangxi Province, more precisely the countryside around Yangshuo, is the China we had in mind before we arrived. Relaxed compared to a lot of other places in China, picture-perfect karst landscape, sugarloaf peaks dotted around meandering rivers. It was so beautiful, and as a bonus we even got a whole day of pure sunshine, (out of nearly a week, I have to add), we haven’t had that in China in the past two weeks!

So the weather forecast had promised this one sunny day, and as soon as it came we got ourselves some bikes and off we went. When you think about traffic in China you think bikes – but actually most of them have been replaced by electric scooters. And they apparently can go anywhere – on the streets, on pavements, on the left side of the street, on the right side… When walking in the cities I was terrified by the traffic that seemed so anarchic and always thought cycling amidst this chaos would be the most horrible thing to do. Turned out, it’s actually not so bad. Not at all. You kind of go with the flow and find your way around cars, scooters, pedestrians. In Germany you would get thousands of angry shouts for just riding on the wrong side of the street, here nobody cares at all what you do as long as you move out of the way in time. Once you adapt to the system cycling is really a nice way of getting around in China. At least in the more rural areas like this one. 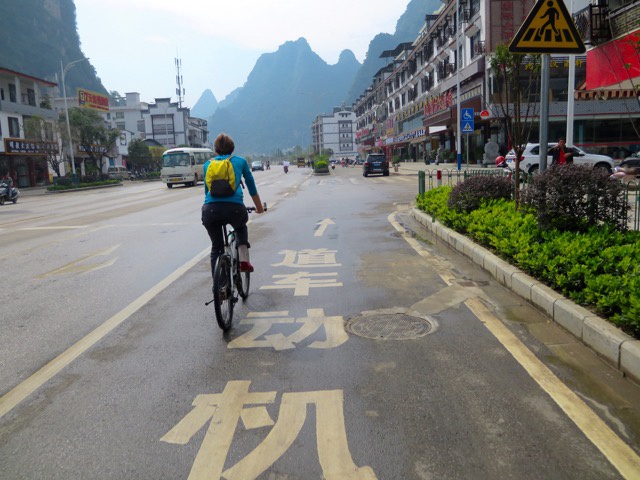 Yangshuo only has 300,000 inhabitants, so it’s practically a village. It didn’t take us long to ride out of the busy center onto a broad countryside road. The landscape we passed was spectacular, we stopped every 50 meters to take pictures. We took a break and went for lunch in a restaurant right next to the road. Sine I wasn’t very hungry I ordered a Chinese Tomato and Egg-soup, which cost around four Euros. What I got was a bucket for a family of four. Come on, China, what are you doing?! Do I look that hungry, do you want to feed me? 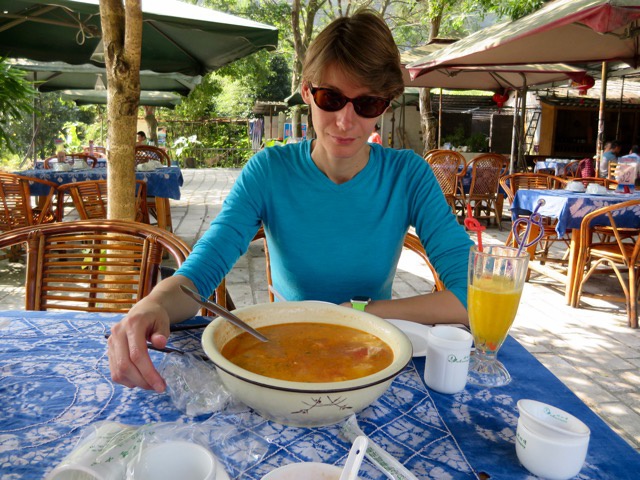 Needless to say, I didn’t finish it. Not even half. So off we went again. The ride along the main street was beautiful but easy, so to make it a bit more challenging and exciting we decided to take the next turn right and find a different way back to Yangshuo. We rode through a nice little village, alongside more picturesque peaks and crossed another river, no idea which one. We soon found ourselves on a narrow gravel-path. No one was around here, we only met the occasional scooter and saw some farmers on their fields. Luckily we had chosen the mountain bikes, now we needed them, going on gravel and with one or two steep ascents to climb. 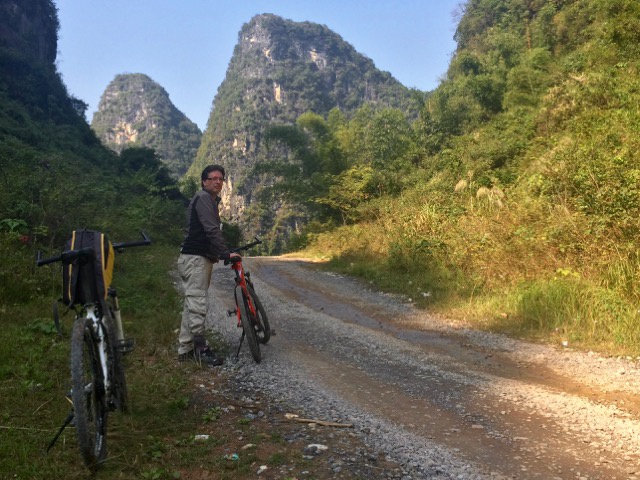 Since we had crossed the big Yulong River on the way we knew that at some point we had to cross it again to get back. When we reached the river banks we checked the GPS in Henry’s iPhone for our options. It told us we could go either right or left, but one way looked somewhat dubious, though it may have been a bit shorter. We had just made the decision for the longer way when an old man approached us from the front of his house and told us something in Chinese. “Bamboo” was the only word we understood (the only English word he knew apparently). We figured he was telling us not to go in the direction we were about to ride on, but wanted to sell us a ride across the river on his bamboo raft. Saying, “thanks, but we want to go back by bike, we’ll be fine” we went on our way.

We soon found out what he had tried to tell us. The path got narrower and narrower, and also quite muddy, until at some point it just vanished into a watered field. Next to us a water buffalo was dozing, while I nearly fell off my bike and ruined my red suede shoes I had put on this morning, because I was expecting an easy bike tour in the sunshine, not a muddy hike (stupid me). Well, so we shoved our bikes back, walking carefully. The old man still sat in front of his house, he had been waiting for us to come back I guess. He lead us the way to the river bank and to his raft, put our bikes on, and placed us, too. He brought us safely and dry to the other side where we rode on, through more nice villages, taking one more break for coffee, until we arrived back in the bustling village of Yangshuo. 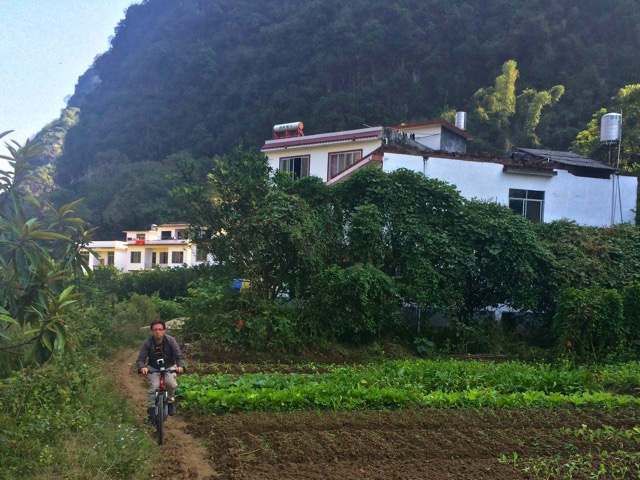 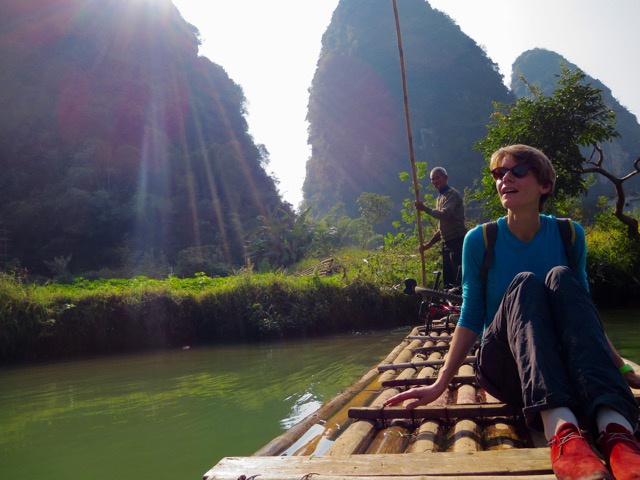 Yangshuo’s beauty is not exactly a secret. I think it must be the most touristy place we’ve been to this year. Well, maybe except Key West. The center is a pedestrianised street full of Western and Chinese restaurants, souvenir shops, little boutiques, bars and clubs. We even found German Currywurst. It gets crazy crowded there in the evening hours. But it’s well worth to stroll around.

In the daytime there are a few parks to discover, the Yangshuo Park has an easily accessible peak, but the views are – well, the mountains are marvellous but Yangshuo itself is not a very beautiful town, you’ll see in the pictures. There is another peak, the Green Lotus, right at the Li riverbank, but unfortunately it was closed when we went there, because it had rained and was considered to be too slippery. Seriously, China? Just look at the traffic in your cities, that’s what I call dangerous! Never mind, the park’s view from the lower platforms is still worth it’s 30 Yuan entrance fee. 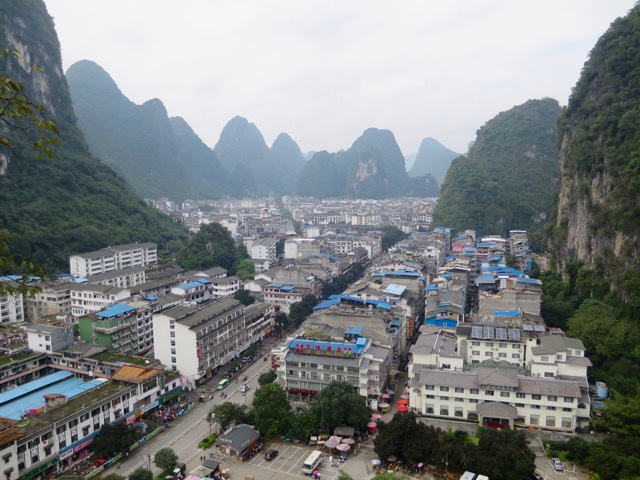 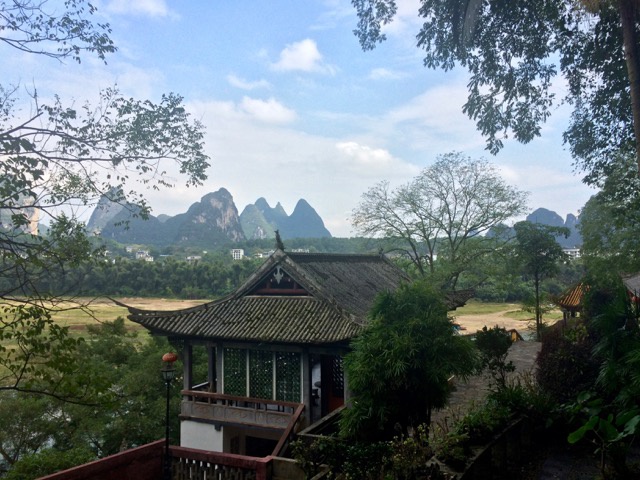 A great day trip from Yangshuo is the even smaller village of Xingping. It’s famous for the landscape that is printed on the 20 Yuan Notes. When we were there we didn’t find the view that impressing, at least not compared to what we had seen on our bike tour earlier. It was also grey and drizzling a bit, I bet it looks much more picturesque in the sunshine. 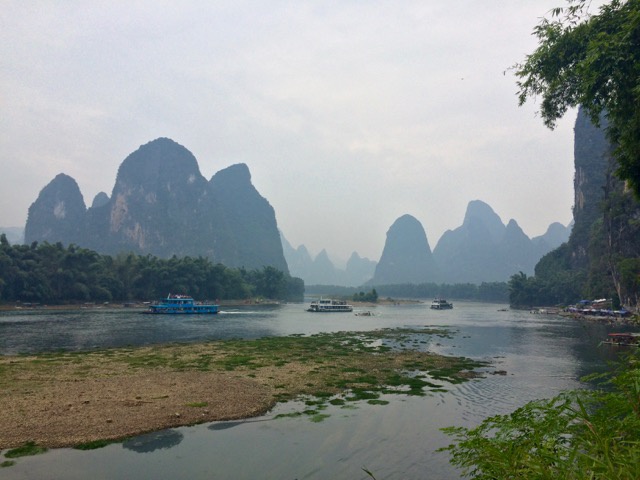 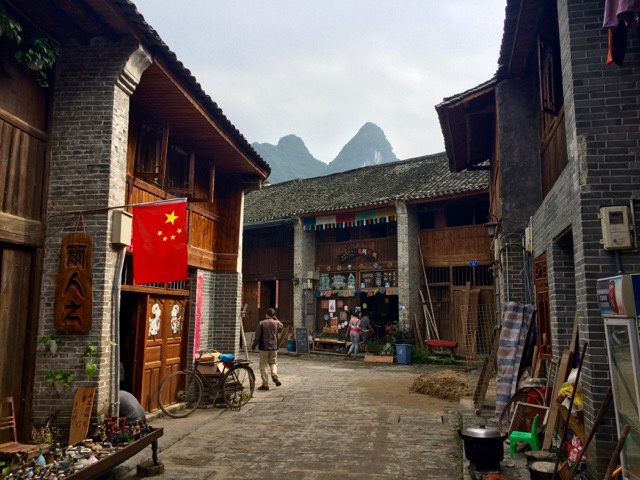 The village itself is pleasant, very laid-back and relaxed, so a welcoming break from the crazy crowds. It’s still touristic, with a lot of cafés, restaurants and shops, but not as mad as Yangshuo, though I fear in a few years time it will be…

Some more pictures specifically selected to make you envious: