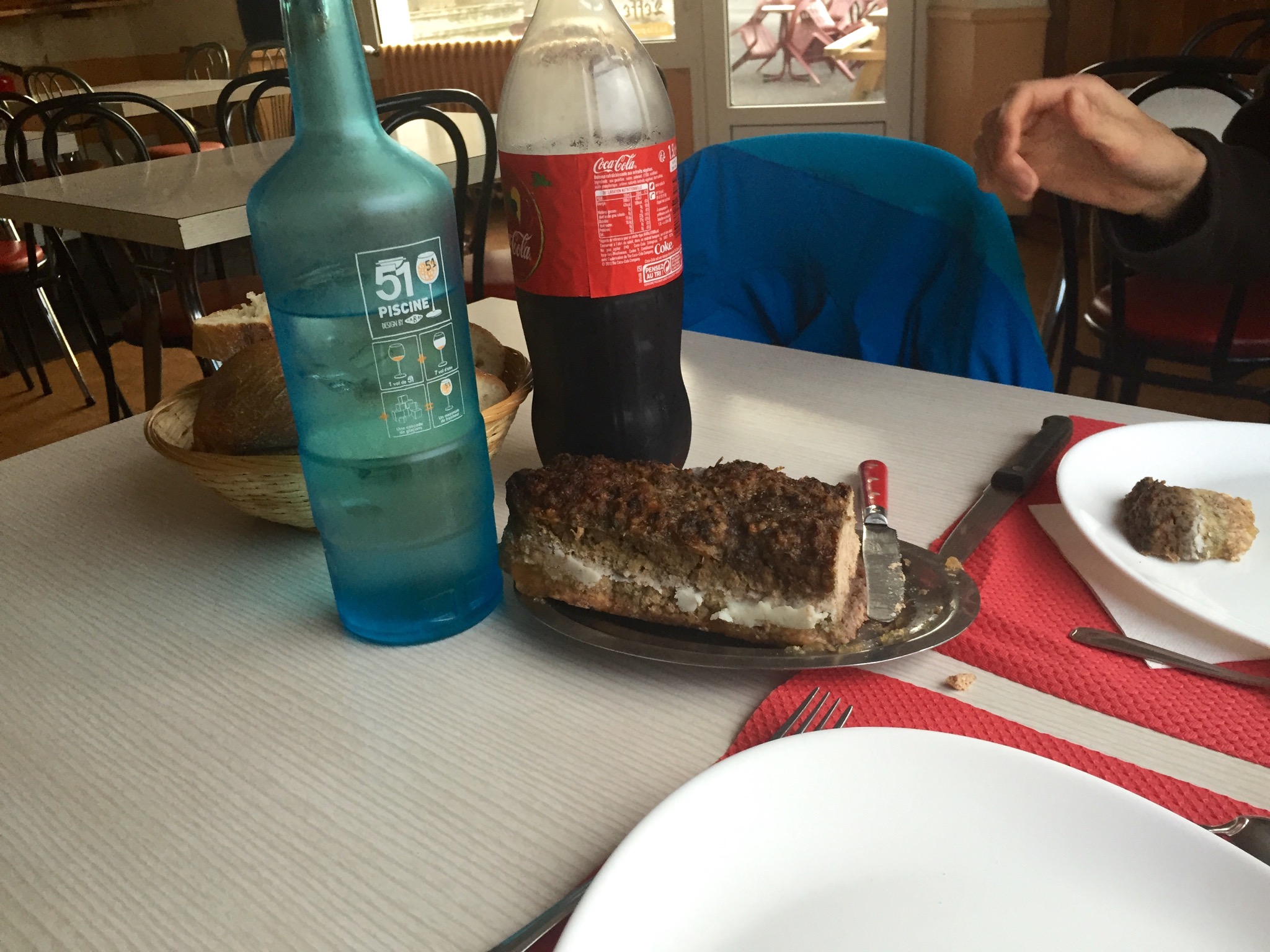 Landos, ok this got somewhat interesting, for some reason we had the urge to eat a Pizza. As we learned during our stay in France, places that advertise Pizza are normally closed, broke, or sell warmed up frozen Pizza. There is one exception, but not in Landos.

Anyway we went into this place that had Pizza advertised outside, the waiter that looked somehow like a homeless version of Gérard Depardieu but worse, asked if we wanted something to eat, we said yes. Wine? Hmmm, no thanks just Coke. That was all. No menu, no further questions asked. Nothing at all, then he was gone. Two minutes later he came back with a big bottle of water and a 1.5 liters bottle of Coke.

10 min later the food.A big basket of mixed French bread, a plate with two salad leaves and some oil drizzled over them. The main part of the dish was a plate with a good pound of meat terrine (introduced to us as the “terrine de la Maison”), which was actually quite good. We ate all we could to get our moneys worth (our guidebook said dinner was 15 Euros per person). Just as we thought we couldn’t eat any more and prepared to order the bill, along came a huge platter with home made french fries and chicken thighs. OMG… So we ate our way through the second course. We where about to explode from over eating, so Gérard (I’ll just stick with that as his name) came and took away the platter only to come back with a selection of more bread and some french cheeses. Ok, this is getting serious. So on with the cheeses. They also were remarkably good. Probably regional. This must be the last course. Cheese is always last, isn’t it? But why do we still have a small spoon left over? Yep, you guessed it. One more course to go, a “Tarte de la Maison”, a house made tarte tatin, about the size of a large toast, one each, again very good.
To round it of we had two espressos.
“L’addition svp.”
Surprisingly the bill amounted to 27.50€ plus tipp. No complaints here, had a good meal and quite some fun.
We would have liked to have added more pictures but we were being watched by the entire staff. So here’s just the famous terrine we thought was going to be our only dinner…