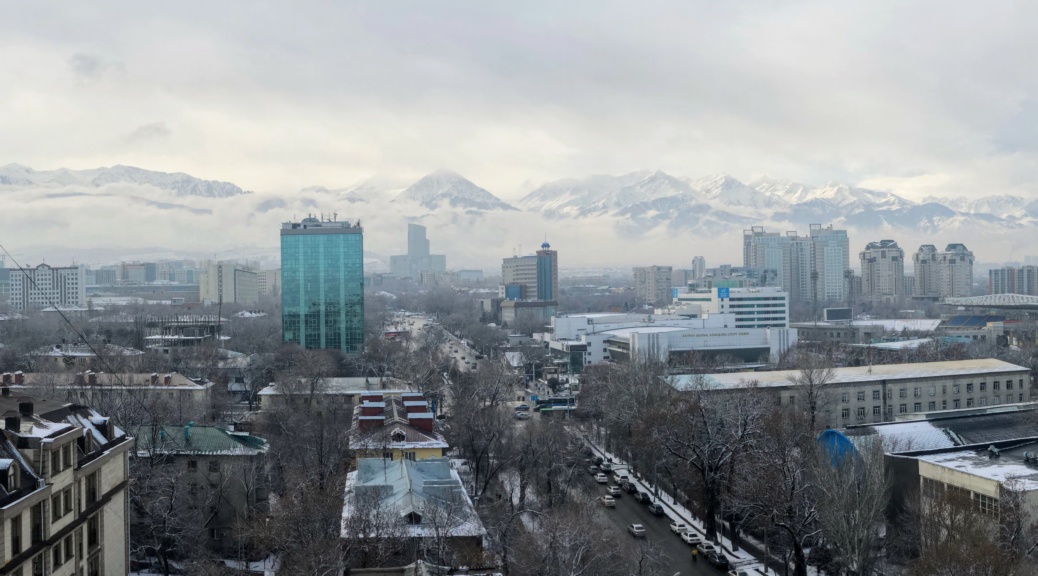 The City of Almaty or Alma Ata meaning „Apple Grandfather“ dates back to the 10th Century before Christ, but the name Almatu only appeared around 1285 A.D.

When traveling by train through Kazakhstan, it’s not the most beautiful parts of towns you’ll see. I guess it’s like everywhere – the buildings look kind of run down and there is rubbish lying around. The upmarket quarters of cities are usually not facing the train tracks. So after three days of train travel, where endless Kazakh steppe, small villages and ever the same looking train stations took turns, I was really surprised by Almaty. While Almaty looks and feels like a more recent City it is actually very old, more than 2100 years old.
It is the biggest city in Kazakhstan and for now the only one we have visited. After all we are only really passing through. Almaty has more then 1.9 million citizens. Its a very clean city and has a safe feeling to it. Probably is safer then many other European (and not anymore European) cities of similar size. The main religion is the Islam 70% followed by Christian.
Traffic is kinda wild, caution while crossing roads is advised. Crossings roads without pedestrian lights does actually seem to work better then with lights. Almaty, or at least the places we went to, has a really good bike and pedestrian infrastructure.

Some places worth visiting include The Kok Tobe „Blue Hill“, It has a popular recreation area on top which can best be reached using the cable car. You can also get there walking, bus, bike, you get the drift. Cable car is the best though because it’s inexpensive and gives a great view over Almaty. The Blue Hill also hosts the Almaty Tower. A steel tube TV Tower with a whopping 371 meter (1200 ft) of hight.

The Ascension Cathedral is definitely a place to visit. Especially during a service. Really beautiful singing. Not really something that is easy to describe. It’s something you have to witness for yourself. Maybe on YouTube ? Haven’t checked.

Go there even if you are an „infidel“ !
Skiing, snowboarding mountain hiking, karaoke, clubbing, pubs, are just a few of the things Almaty has to offer. I’m pretty sure there is something for everybody.When it comes to Cafes Coffeedelia 1 and Coffeedelia 2 quickly became a favorite places to go. Good service, food and drinks all good, wifi, clean restrooms (must say though, we didn’t come across even one restroom that wasn’t in excellent condition, chapeau)
That been said there are an abundance of great places to chose from. Dining is also very recommendable in Almaty many very niche places, unfortunately we didn’t have time to try them all. But we enjoyed  and would recommend: Daredzhani for great Georgian food and Tandoor for some Indian deliciousness.But again, I’m sure there are many many more superb places to go. Winter must probably be the best time to visit, or summer as it does seem to be quite a green town. Not that we saw much green due to the time of year and the magic that happened over night. SNOW loads and loads of snow !

From one day to the next a white cover of deep snow covered Almaty, all the more impressed I was to see that by breakfast time all major and most minor roads and pedestrian walks where already cleared, you could see people private and council workers relentlessly fighting the snow, roads, pavements in front of stores even between and underneath parking cars. Traffic is flowing at a normal rate as if nothing ever happened. Very impressive.

Of course there are also an indoor markets, Zelyoniy Bazaar, just to name one. Located Жибек Жолы проспект, 53, Almaty 050000, Kasachstan
where you can buy everything form local cheeses, sweets, fruits, meat, veg, and so on. But remember to haggle, don’t just pay, the will try to overcharge especially if you’re a tourist. First opened 1875 the bazar has been around for almost 150 years.

And as a small Bonus some random street art …

Conclusion
We didn’t have many expectations coming to Almaty, but they certainly were exceeded.
While we are not into winter sports it does seem to be a good place to go for such activities.
At this point we would like to thank Xenia who we had met in the train. She had some really good advice on place to go and even gave us a lift to our Hostel when we arrived. THANK YOU XENIA !