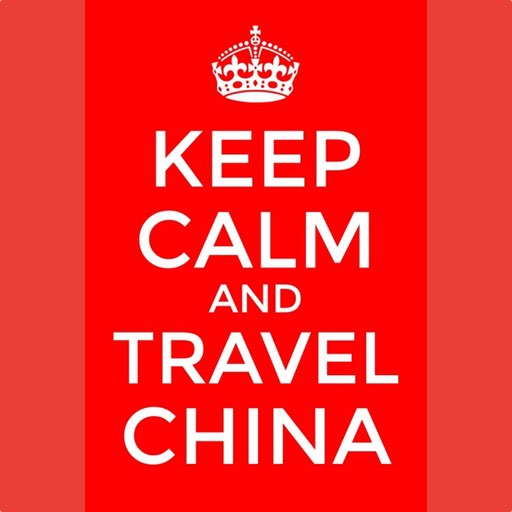 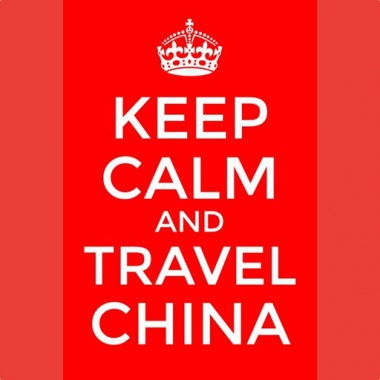 Travelling (mainland) China can be challenging. It’s Asia on an advanced level, definitely. Our Lonelyplanet guide book had told us to treat the journey more like an adventure rather than a holiday. We thought, well, we always do that with our travels, so what could possibly be so different? Well, we found out, there are a few things. So here is what we learnt put together in a basic survival guide to make your journey through the Middle Kingdom as smooth and hassle-free as possible: 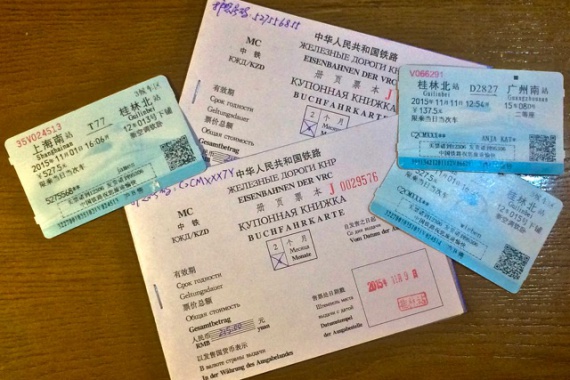 The challenge  starts even before you go on the actual trip, with organising your visa. We had to give the embassy a detailed itinerary of our trip through china when we applied for the visa, including booking confirmations for transportation and hotels.

Of course we didn’t stick to the itinerary we had worked out for our visa application in the end. And that’s okay, they don’t actually make you stick to it. We met people on our journey who gave us some new ideas where to go and what to do, the weather turned out to be bad at some place or the other, there are a lot of reasons that make you want to change your plans. We were lucky we had only booked rooms in hotels with a free cancellation option. So no problem here.

But we had also booked train tickets in advance over an agency, and cancelling these proved more difficult. Buying train tickets on your own is actually not as difficult as we had imagined it would be like, there are lots of possibilities: all hostels and hotels have booking services, (though they take a commission), there are usually many travel agencies around towns or ticket offices specifically for rail tickets and you can – and that’s the cheapest option, since no commission applies – easily buy them at any train station. So really no need to use an agency, but we didn’t know that before, of course.

Cancelling tickets is more complicated, though: You can ONLY cancel train tickets at a train station, you have to appear in person and present your passport. You will get your money back, though sometimes a small cancellation fee applies, depending on the time left until the scheduled department.

To complicate things, you cannot buy any new train tickets for a day on which you already have a scheduled train journey. We tried to buy tickets to Guilin in Shanghai at a ticket office that was near our hotel. We hadn’t cancelled the tickets to Zhangjiajie, because we hadn’t made it to the train station yet – we planned to do that before we got on our train. The lady at the ticket office took our passports, and after a check in her computer she refused to sell us the tickets to Guilin. Luckily she spoke rudimentary English, so she could tell us we had to cancel our tickets, before we could buy new ones and that she couldn’t do the cancellation. So we had to go to the next railway station first, which was quite a long journey by subway from our hotel.

We completely failed at cancelling our international train tickets from Nanning to Hanoi. After an almost bizarre odyssey from one ticket booth to another at Guanghzou train station (do you remember permit A38 from Asterix and Obelix?) we were finally told cancelling of these wasn’t possible at all. The tickets were different, they had all the information in German and Russian written on it, and they looked like they had been issued by and old typewriter rather than a computer. So we think the ticket sales guys had never seen anything like it (there are no trains to Vietnam from Guangzhou), and simply had no idea how to deal with them. But since we didn’t have to book new train tickets for the same day, that was not a problem, and the financial loss wasn’t dramatic, either…

Just one more thing: Don’t buy the “standing tickets”, they are literally only for standing, the whole way! Some friends of us found out how it feels like to stand in a train for more than twelve hours, check it out here if you need convincing.

Have your passport ready, always 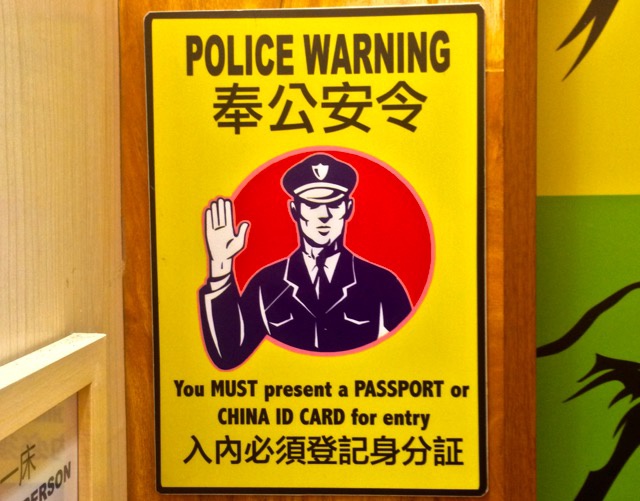 Apart from buying and cancelling train journeys you will need your passport for a lot of things. Checking into a hostel or hotel of course, since they have to register you at local authorities (you won’t get a formal registration form like in Russia, though, that’s something you don’t have to bother about, at least). You also have to show it when getting into a train station or the waiting area for your train, when buying a SIM card for your mobile phone and of course in a random police control. We didn’t experience the latter, but we read it could happen anywhere, so it’s wise to carry your passport with you wherever you go, don’t leave it in the hotel safe (leave copies there, if you feel safer with that). 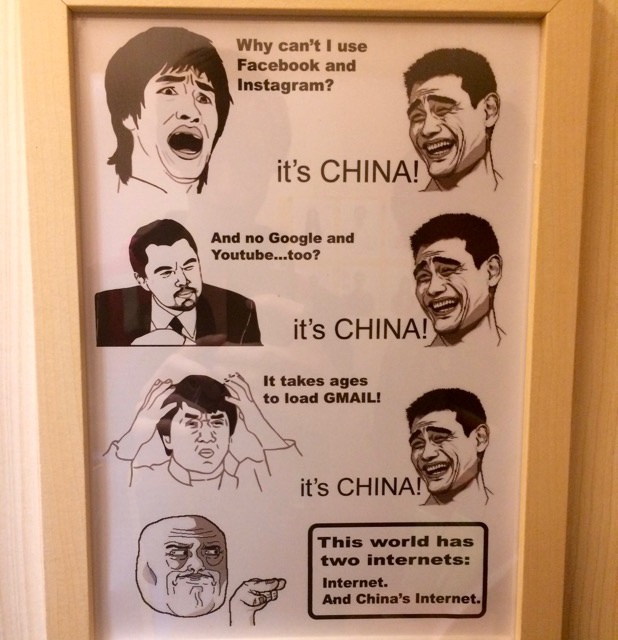 You probably have heard about China’s internet policy. No Facebook, no Instagram, no Google. So also no Google maps to help you navigate around. Around 30,000 Chinese officials continuously scan the Internet to look for politically incorrect content, that might “disturb the country’s harmony” which is then blocked. There is a way to find out if a page is accessible from China or not before you get there, it’s called Great Wall of China, ironically, check it here.

There is a way to bypass the “Great Wall” and access blocked content inside China: You need to install a VPN connection on your laptop or phone. Look it up on the internet (Bing China works for example) or on the App store of your phone, which also works as usual. Interestingly, you can find and install these VPN programmes from inside China. Some work better than others, and occasionally some are found out and blocked, so try a few different apps to see which one works best for you.

The thing you can’t “fix” and have to live with is the slow speed of your connection. Some things work fine, like content originating from China, but as soon as you try to open anything else, prepare yourself for waiting. A lot. Download rates can be as slow as five to 20 Kilobyte per second. Yes, you read correctly, we even had rates of 4 Kilobyte per second. Bear in mind, that VPN makes your connection even slower.

So it’s a good idea not to rely too much on your Internet connection. We got an offline map, MAPS.ME programme on our mobile phone to help navigate in the cities, that proved really helpful. Or prepare mentally at home by reducing your broadband Internet connection to pre-ISDN for a few weeks….

No English, so learn Chinese or be creative about communicating 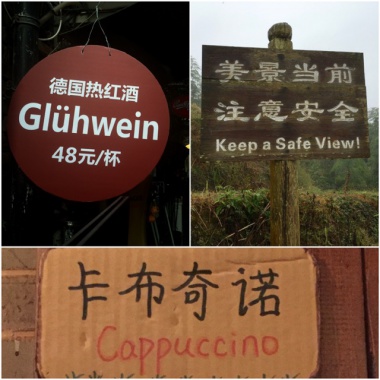 It is very likely you will end up somewhere where no English is spoken. More likely than somewhere where it is spoken, actually. Even in really big and international cities like Shanghai or Beijing we were surprised by the lack of English anywhere.

To avoid misunderstandings and make life easier for everyone we assembled different communicative resources. We took pictures of bilingual signs with our phones whenever we found them, that we could present when needed, or downloaded pictures of useful things from the internet (or took screenshots on our phones, when the connection was too slow again for downloading). Whenever we met someone with good command of English we asked him to write down useful words or phrases. So we had a good kit of different communication devices to overcome the language barrier.

Pictures are probably your best bet, since different dialects of Chinese are spoken in different parts of the country, someone who speaks Cantonese won’t understand a Mandarin phrase for example.

Translation apps are good for breaking the ice, for having a good laugh. But they are completely useless for conveying a message correctly. 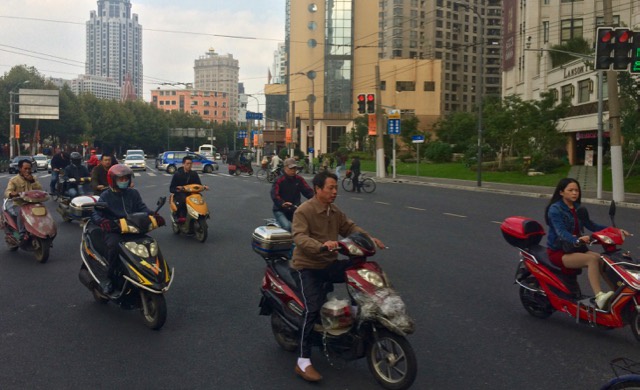 Something that really horrified me in the beginning was the seemingly anarchic traffic on the streets. But we observed and think, there might be some unspoken rules about who goes first, at least:

Especially scooters seem to move in lawless territory. They will go over red lights, drive on streets, pedestrian pathways, just about anywhere. And in any direction, too. They also drive electrically, so it’s difficult to hear them coming. So pay special attention to them to prevent being run over.

So as a pedestrian just make sure you don’t get in the way of anyone, and you’ll be fine. It’s actually not as bad as it sounds, nobody wants to kill you. Just don’t stop when your crossing a road, traffic will go around you. 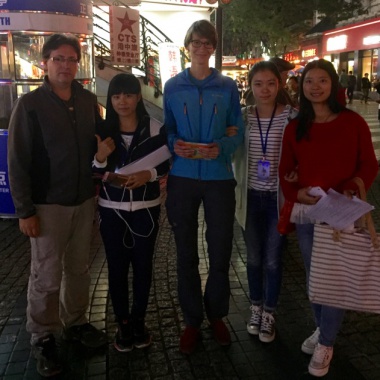 As a western-looking person you are somewhat of an attraction in China. In some places more so than in others. And if you are, like me, a woman who is tall even for European standards, you will inevitably feel like some sort of circus attraction. I mean, I’ve been to different places in Asia before, to Japan, Thailand, Korea, so I was prepared to attract a great deal of attention. But nowhere else in Asia have I been stared at that bluntly and awkwardly. People even took pictures of me with their phones!

I had different patterns to deal with that. If people were nice and trying to communicate, when I noticed, I would just smile back, maybe say a word or so to them, like, “yeah, I’m tall, I know.” If they were just rudely staring I would sometimes stare back and give them an evil eye, they usually look away at some point. But in the end I somewhat blocked it all completely out, I didn’t even notice anymore. Henry would tell me, “didn’t you see how they were staring?” and honestly most of the time I didn’t anymore.

Get up early or get used to crowds 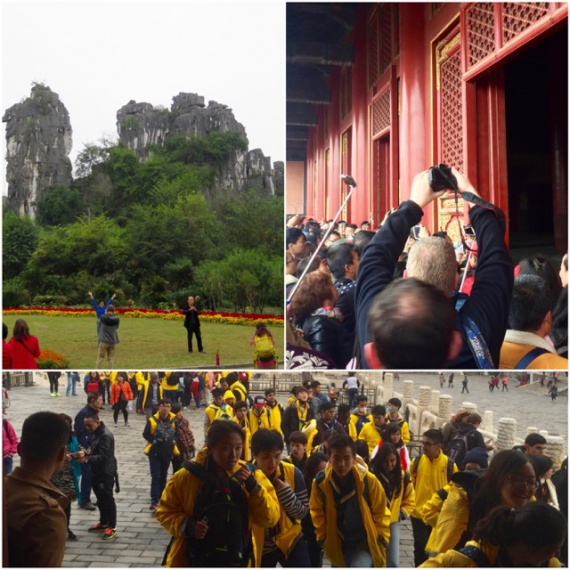 Tourism in China in a nutshell: It’s crowded, you wait forever in long queues, and you have to watch out not be accidentally kicked in your guts by a selfie-stick. We did the mistake of visiting the Forbidden City in Beijing during mid-day, and got a very good first-hand experience of that.

You can avoid the crowds by going very early or late, or in rain, if you don’t mind that. Or you can do some research and try to find the hidden remote places. That means, you shouldn’t go with the easiest or cheapest option. We went to the Jinshanling section of the Great Wall, which was quite a long bus ride form Beijing and also more expensive when you do a tour, but we found it almost deserted, it was absolutely worth it.

But you can’t outrun the masses forever. There are sites, that will ALWAYS be crowded, like the Xi’An Terracotta Warriors. At sites like these you just have to adapt: get a selfie-stick for self-defence and fight for your place in the front row!

And last not least: enjoy it all, especially the quirky things you’ll stumble upon… 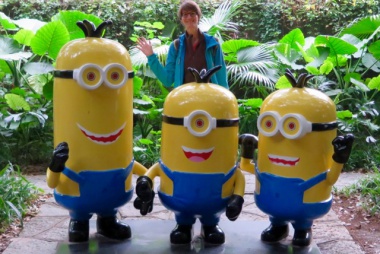 2 thoughts on “How to Keep Calm and Travel China”