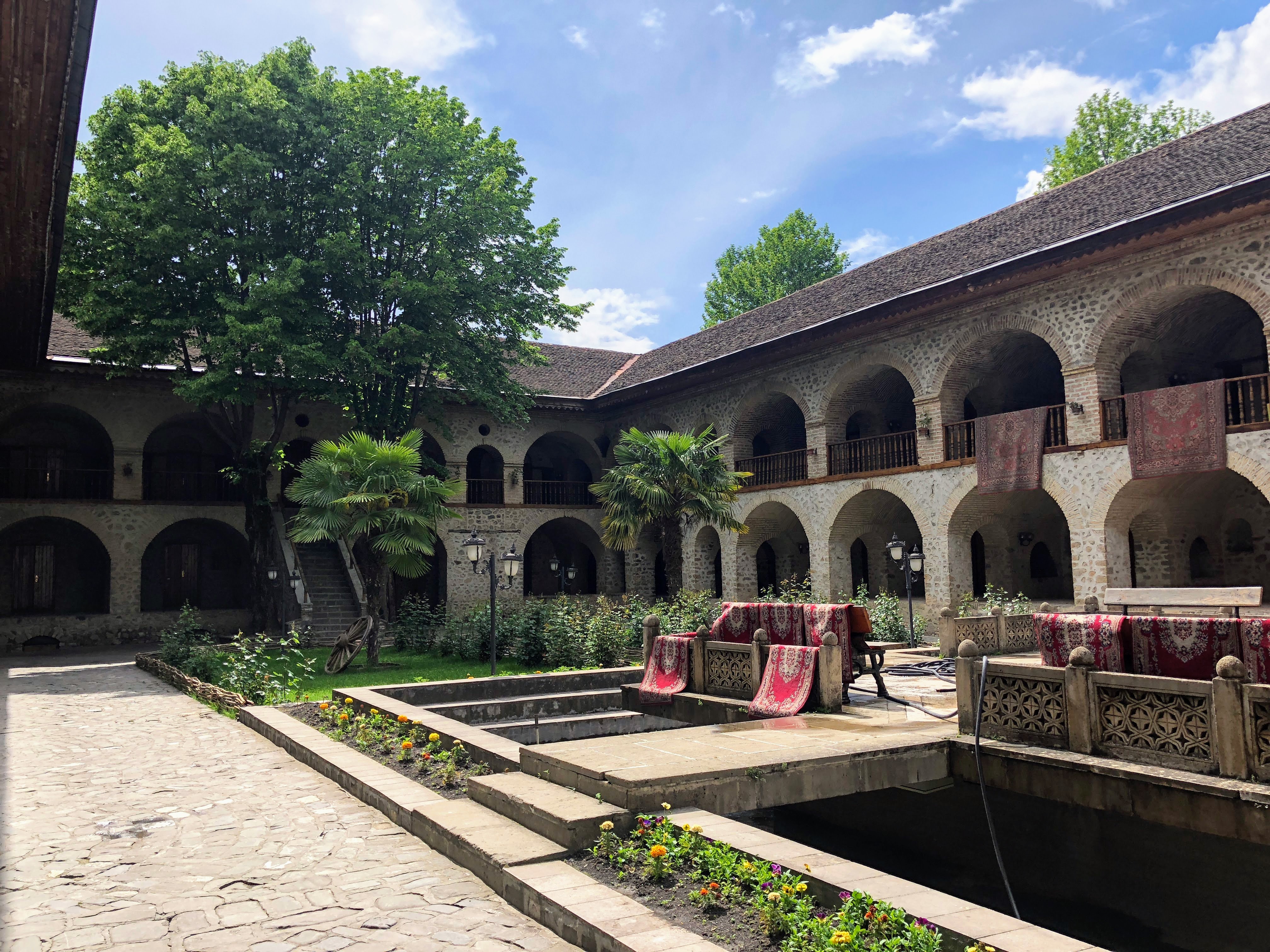 After two days in Lahic we arrived at our next destination, Sheki – or Seki, Sheke, Shakki, Shaka, Shekin, Shakne, Shakkan. Well, all is correct, for historical reasons, would take too long to explain.

With its 64,000 some inhabitants Sheki counts as a city. But it feels more like a small town, which is nice for us.

Sheki is especially known for its carawanserei. Originally there were seven of them around, two are still there. One has been made into a hotel, the other one is still work in progress. Apparently there are some problems with construction or financing or both… The hotel/carawanserei is definitely worth seeing though, and probably also nice staying in. We didn’t, we chose a homestay. More on that later. For those of you who don’t know what a caravanserai is: a truck stop with places for camels. Sort of. For more, check Wikipedia.

While we were in Sheki, many roads were apparently undergoing some sort of construction. Our host Ilgar later explained to us, that water and sewer systems were being  renewed. The city council planned to use this opportunity to finally install meters for both – currently flat rates were used. No one really wants these meters so everyone just agrees never to finish the construction – well, sounds somewhat logical…

How to get there

From Lahic a marshrutka goes more or less regularly to Isamyilli. From there you can either try to catch one of the marshrutky going to Sheki, at the gas station on the road to Sheki, or take a taxi. We tried the former: A marshrutka approached, we waved to flag it down, people inside kindly waved back, and gone it was. It was full, since it already started in Baku. So we took a taxi in the end, which only cost us 50 Manat, around 25 Euros. Seems fair for the long ride.

Travelling can get exhausting, so we were happy when we finally arrived at our next accomodation. Wasn’t exactly easy to find, but turned out to be a nice place. Our host Ilgar appeared later. It was a homestay again, staying over with a family. Recommended and arranged by Dadash, our Homestay-host in Lahic. Both know each other through work, they both manage the local tourist information. Ilgar was an absolutely fantastic host, constantly working and improving his house to guest’s needs and fluent in English, also very knowledgable about the city and it’s history. He can also arrange horsebackriding-trips around the region – didn’t work for us unfortunately due to changing weather and showers….

Wherever we went for eating we liked it a lot, except for Sultan House. Well, to be fair, the food there was quite alright, it was just way too expensive. We paid two or even three times the amount we would have paid elsewhere, and some things came extra to the bill, like bread, although it’s part of the dish we had (Piti; it’s a lamb & chickpea dish where bread is a major element…). We heard more bad things about the place being a typical tourist trap. So don’t make our mistake, don’t go there.

That being said, there are a lot of great places to eat out. The Gagarin restaurant next to the Gargarin park is suppedly quite good, we didn’t get there though. Further down the road to the city center you’ll find good and cheap places, and close to the Bazaar there’s plenty to eat to. Nobody needs to get tourist-trapped here. For tea and coffee we quite liked the ArtCafé. They have nice tea sets with a good assortment of sweets.

A nice sweet to maybe even bring home is Sheki Halvasi, that you will find literally everywhere around the city. It’s more a kind of baklava then Halva and a specialty of the region.

What to see and do

Apart from the caravanserei we’ve mentioned earlier there are a few more things to see.

Marshrutka 15 brings you in roundabout 20 Minutes to the little village Kish, where you can visit the old Albanian „Church of Elishe“ from 12th or 13th century. Nothing to do with today’s Albania, the name is confusing. The ride will cost you 30 tegre and entrance to the site 2 Manat. Another curiosity is just opposite the church: a monument to Thor Heyerdal with a quote saying that Odin was from Azerbaijan. Nice to know…

Here you can find everything you might ever need (or not need), starting from electronics, clothes, sweets, veggies, fruits, fish and meat to sheep’s head. Nice stroll around. Also it’s the place where you can catch Marshrutka 15 to Kish and find some cheap and cheerful Döner places.

The memorial for the fallen soldiers of the 2nd World War has to be mentioned in this list. I think it’s one of the most meaningful I’ve ever seen. There is also a nice view over the city.

If you continue the road from the war memorial you will get to this curiosity. There is nothing truly ancient about this place. It’s the ruin of what should have become an upperclass hotel once, built like a castle with great views over the city. At least if you ignore the two mobile reception towers built right in front of it. We cannot tell you if it’s allowed or safe to go inside – we did anyway because we like a bit of urban exploring. If you go, be careful and at your own risk.

The sommer palace was built in persian style and looks quite impressive inside. Unfortunately it’s not allowed to take pictures inside. The surrounding park is also worth a visit and nice for a walk. Originally there used to be more buildings that Kahn Muhammed Hassan had built 1797, the palace is the only one remaining on this site. Entrance for two and a guide to the palace costs 10 Manat.

The palace grounds are free to walk around and there is also an Albanian Church, which has been converted into a museum.

If you want to have your own pictures of the impressive ornaments and windows from the inside we recommend you also visit the next site from our list.

Inside this mostly modest building, taking pictures is allowed, though it costs you an additional 3 Manats. One of the six rooms is decorated the same way the rooms in the summer palace are. Entrance is 2 Manat per Person, a guide 3. This place is definetly off the beaten track, when we arrived we were the only tourists and some old guy just had to get our guide from home.

Unfortunately this is also the place where we were recommended the Sultans House. Later we got to know that they got a commission for bringing tourists. This practice is quite usual in touristy places and doesn’t necessarily have to be a bad thing. In this case though it was…

Sheki was our last stop on our way to Georgia and Armenia.

We have to say, we quite liked Azerbaijan. It offers varying countryside, both glitzy city life and simple rural life. But whereever we were, the Azeri people were always friendly and trying to go out of their way to help us – even with the language barrier. If you linger around somewhere for more than 30 seconds and look somewhat lost, someone will very likely approach you and offer help. Probably in Russian, but using hand and feet works in most cases. We will definitely come back. But maybe wait for a new passport first – we’ve heard that immigration isn’t exactly smooth when you’ve got an Armenian stamp in you passport.