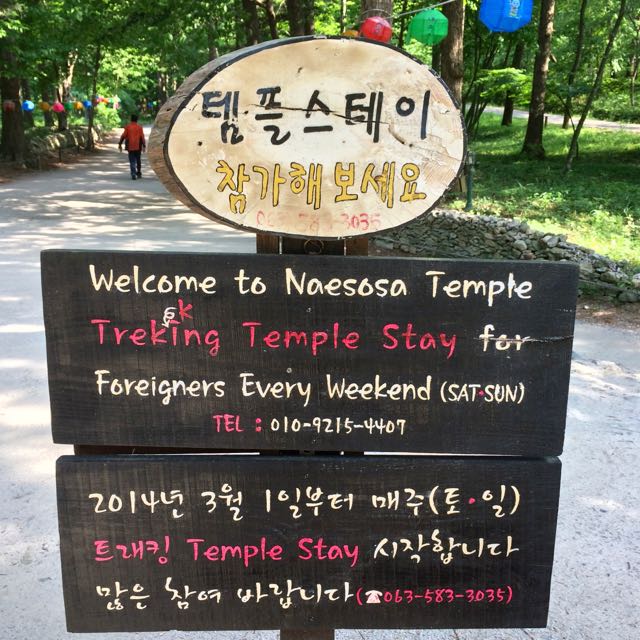 Korean Temples allow visitors to get a glimpse of the life of a buddhist monk through the Templestay program. It’s usually a one-night and two-days schedule, but some temples allow you to stay longer, which is what we wanted.

I don’t think you can get a real impression in just around 22 hours. Also, we really felt like we could use some rest and take things at a slower pace than the last couple of weeks. After some research about the different temples, their schedules and programs we decided to go to Naesosa in Byeonsan Bando National Park in the western Korean Jeollabuk province. We did the “resting” Templestay program and stayed for three nights. Resting means, the only scheduled points on the daily agenda were morning and evening chanting services and the mealtimes.

After our arrival around three in the afternoon we were given our quarters which consisted of two completely empty rooms with an ensuite bathroom. The beds were traditional Korean quilts and blankets, comparable to Japanese futons. The upside: the floor was heated, so although it might be hard to lie on, at least it didn’t get cold. We also got our Temple uniform – an orange T-Shirt and grey, wide trousers. On the wall we found a note with our schedule for the next days:

Next we met Won Jeon, the monk who took care of us during our stay. He taught us the basic temple manners:  Move around the temple grounds carefully crossing your hands (called chasun), don’t run, scream or sing aloud. Greet the monks you meet with the hapjang by putting your palms together and offer a half bow, a gesture which is returned by the monks and symbolizes you and your counterpart are united in one truth. Don’t consume alcohol, meat or fish and don’t smoke on temple grounds. Do the hapjang and three full bows (get on your knees, sit on your heels, place your palms in front of you on the ground first and then your forehead, too, then lift your palms up next to your ears, then get up again) when entering or leaving the main hall. No idle talk inside the hall and next to Buddha pictures or statues. Be on time for meals and the chanting services. Don’t take more than you can eat at mealtimes, which means, completely finish your plate.

So we made sure to be on time for our first temple dinner. There was a buffet consisting of rice, different vegetables, kimchi, fruit and soup, everything made from local produce and prepared without any artificial flavor enhancer or industrially prepared food items. Knowing we had to eat everything we put on our plates but not knowing what it would taste like (and for me: how spicy it would be) we chose with caution and took little. In our rooms we had found even more rules on the wall, one of which saying that “comments about the taste of the food are strongly discouraged”. So we’ll just stick to that.

After dinner the big temple drum and bell reminded us of the Evening ceremony. Won Jeon took us to the main hall (also called Buddha Hall or Dharma Hall). There were no other monks nor any other people around. Inside the hall, after the bows, he began chanting and playing some small wooden drums. We carefully followed a choreography of half bows and full bows. The whole ceremony took around 20 minutes. After that Won Jeon invited us to a tea ceremony, so we went back to the building where we had the temple manners lesson earlier. In another room, we sat on the floor while Won Jeon prepared a tea made from mulberry leaves and explained the Korean Buddhist way of enjoying tea with all your five senses: Hear the water boiling, enjoy the colour and the aroma of your tea, feel the warmth of the cup in your hands and lastly, of course, enjoy the taste. The mulberry leaf tea had a very nice, soft and mild taste. Definitely something I will look for when I’m back home. He also taught us the Korean Buddhist way to meditate. Around eight we were back in our quarters and pretty much went to bed straight away, setting our alarm clock to four am.

Getting up that early was quite hard, especially since we hadn’t slept very well on the hard floor. We slipped into our uniforms and went to the Dharma Hall. This time we weren’t alone, there were two other monks present. We did our bows and sat down until the ceremony started. The text varied slightly, but the choreography was the same as in the Evening service. After that we went straight back to bed and slept until 5:30, when we got up and ready for breakfast. Breakfast was the same as dinner the day before, with slight variations. The kitchen staff really made sure they didn’t throw anything away, all leftovers were back on the buffet. Which is the right way to treat any food, we say. After breakfast we went straight back to bed, again. We know, probably not wise if you want to get used to this different daily schedule, but we were just too tired.

Lunch was basically same procedure as dinner and breakfast. Rice, veggies, some leftovers, fruit. In the afternoon we felt fit enough to actually do something, so we went for a hike in the surrounding mountains. A signpost at the trail’s starting point called the treck ahaed to the Jikso waterfalls „intermediate“, so we looked forward to a nice, relaxing walk with maybe some demanding ascents. Well, this turned out to be the most difficult and strenouus hike we’ve done so far, including the hike in Tongariro, New Zealand. We climbed 350 meters in altitude in 1.2 kilometers, so we were pretty hungry at dinner time. After evening ceremony, two other travellers doing the Templestay arrived, and we all had another mulberry-tea time and meditation session with Won Jeon.

The next day, which was our last full day, we had some scheduled program points: We made our own lotus lanterns after breakfast, in the afternoon Won Jeon drove us to another temple, Seonunsa, which is the „head temple“ of Naesosa and several others. After that excursion I headed back up the mountain, to enjoy the view on the temple in sunshine from above. In the evening Won Jeon showed us his skills at the temple drum, which were quite impressive by the way (he could easily play in a heavy metal band). He had actually made second place in a temple drum contest several years ago, he told us. In the end, we all got a go to strike the big temple bell to call for Evening Chanting.

I felt actually sad when it was time to leave the following day. We had gotten used to the pace of temple life, even the early wake up time. And Won Jeon was a great mentor and host during our stay, he had travelled himself a lot, in Europe. Life in a temple is quite different from the rest of fast-paced, high technology Korea and definitely something to experience when visiting this country.