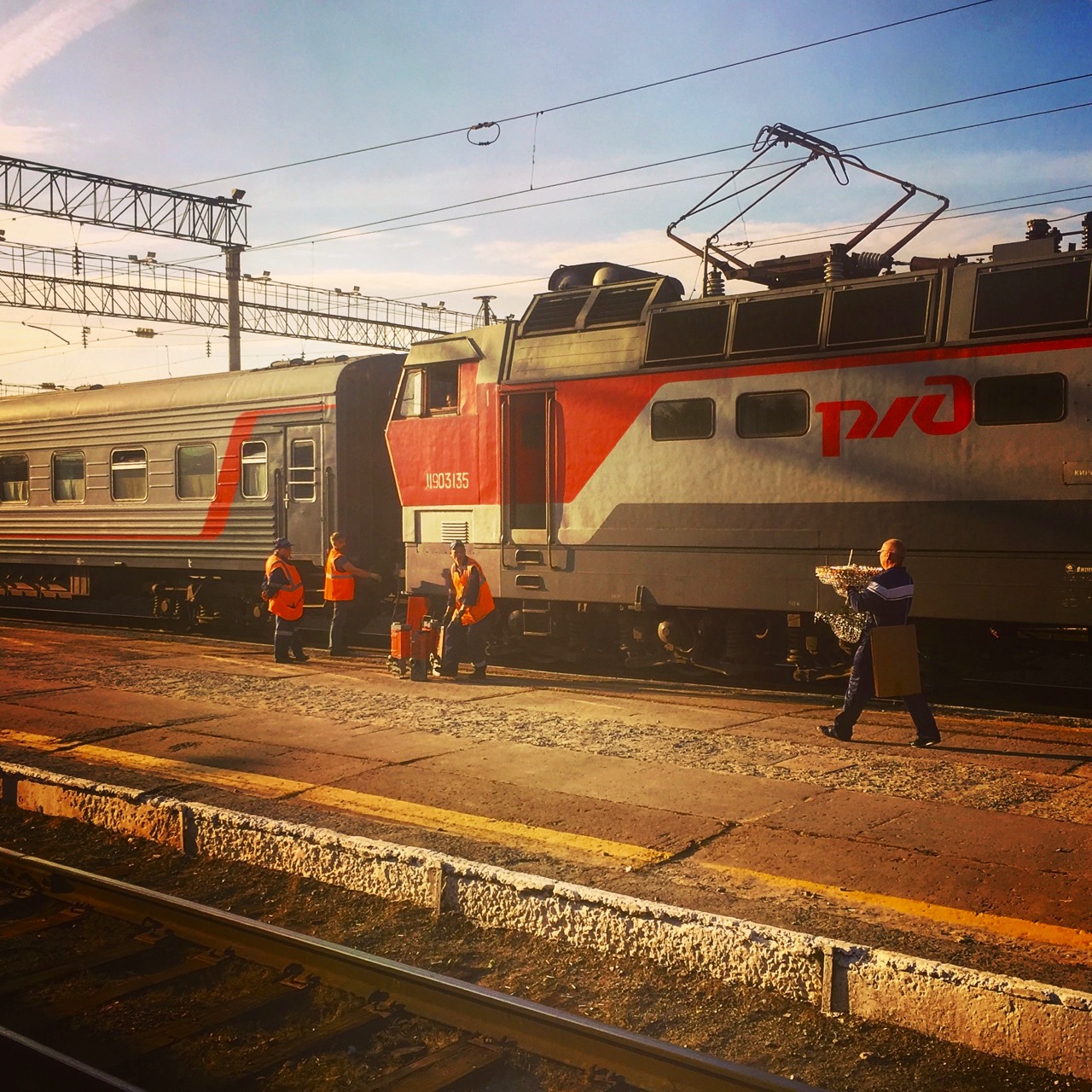 So I thought our trip across the United States by bus was a pretty long journey. Then we did this.

In a nutshell: 7826 Kilometers, 5 journeys between 22 and 32 hours each, roundabout 140 hours spent on the train in total, three different countries and cultures, six cities to explore. 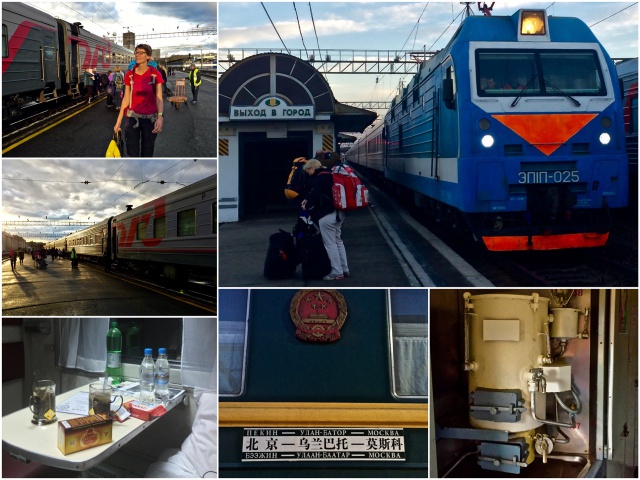 Old at first sight, but mostly clean and nice. The Russian trains were always heated, and most of the time quite hot. So best to wear a t-shirt. There is a very relaxed dress code on the trains, everyone changes into jogging trousers after getting on the train.

You will find a samovar in each carriage providing hot water for tea and coffee. The train attendant, in Russia always a woman, the so-called Provodnitza, will rent you a glass and spoon and also sell you teabags, coffee and little snacks if needed. Sometimes the ticket includes a meal, sometimes we got a paper bag containing some snacks, water, yogurt, and a teabag. But you can also buy food and beverages at the stations where the train stops, at small kiosks right next to the tracks.

There are no showers on the train (at least not in 2nd class, where we travelled), but toilets, which sort of deteriorate, the further you go on, but bearable, most of the time at least. To be sure you should bring your own toilet paper. The worst train we had was the one from Ulaanbaatar to Beijing, the attendant (this time a man) didn’t seem to care at all, the samovar wasn’t turned on most of the time, it was overall quite dirty and lets not talk about the toilets…. Luckily this was an exception.
We travelled 2nd class, which means we had each a berth in a four-berth-compartment, which was quite comfortable. There seemed to be more space in the compartments on the Russian trains than the ones to Ulaanbaatar and Beijing. Sleeping was generally not a problem on the train, the constant movement and the trains “choo-choo” noise seems to have a tiring effect, only border-crossings were a different affair.

In Russia our company were mostly Russians, we rarely met any foreign tourists. Often our company wouldn’t speak English, but it’s amazing how much you can communicate with only basic knowledge of the language and using hands and feet. A part on the way from Yekaterinburg to Novosibirsk we talked about everything from the situation of migrants in Europe, Russia going to war with Syria to the Krim-Crisis and holidays in Turkey (she spent the last holidays in a hotel wit lots of Germans and didn’t like it at all – next time she would take a hotel with more russian tourists she told us…) with a very nice lady, whose English was on the same rudimentary level than my Russian. Now I know that “Kipr” is Russian for Cyprus, took us 20 minutes to figure that out…

Our carriage on the train from Irkutsk to Ulaanbaatar on the other hand seemed to be full with Germans (this was the only train where we had a compartment of our own during the whole journey, which was nice for a change). From Ulaanbaatar to Beijing we were surrounded by British tourists.

You will cross 5 time zones from Moscow to Irkutsk, so make sure you spend enough time in the cities to cope with that. We spent at least three nights in each one. Some things you shouldn’t miss when making your way through Russia: Look out for hilarious monuments. Russians seem to love to put up memorials and monuments to all kind of things. Like a Beatles Monument in Yekaterinburg, a monument to the invisible man and even one for the traffic light, in Novosibirsk. If there, pay the Transsiberian Railway Monument a visit, it’s truly stunning. 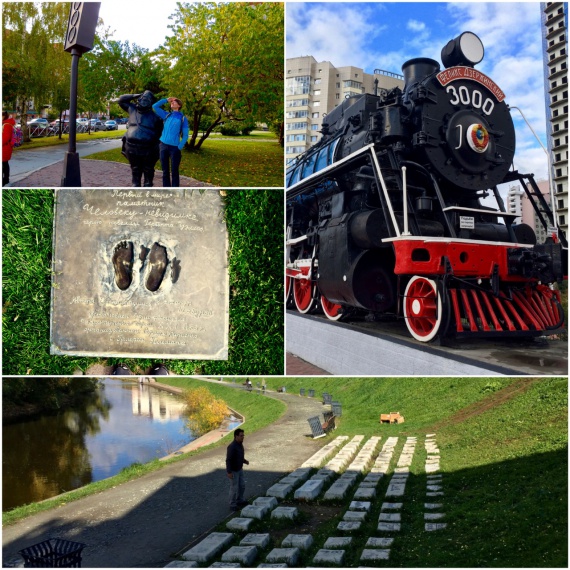 Then try to take a selfie with Lenin in every city you visit. Trust me, there is a Lenin monument in every single one. All in more or less the same pose – makes me wonder if they made like 1000 in one batch and distributed them to all major towns and cities…

One last but kind of important advice for stopovers in Russian cities: do take at least some clothes to dress up with you, at least a pair of high heels, to blend in with the Russian women. I didn’t and felt constantly underdressed… 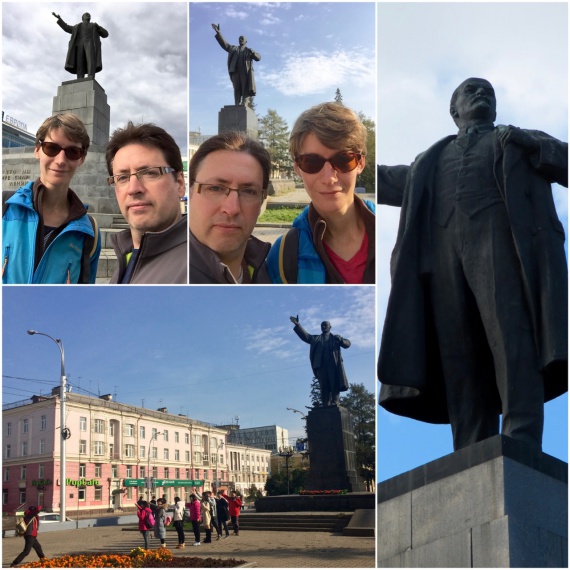 Well, the food on the train is usually not really worth mentioning. When we got a free meal it was mostly noodles with chicken or beef, we got a Bortschtsch once, which was somewhat greasy but not too bad. The rest of the time we did it like the Russians and brought our own food. Instant noodles are popular that come in plastic containers and just have to be filled with hot water, often called “Business Lunch” or “tasty”. Which they are clearly not, definitely not better than the meals provided on the trains, but they help fight the hunger. 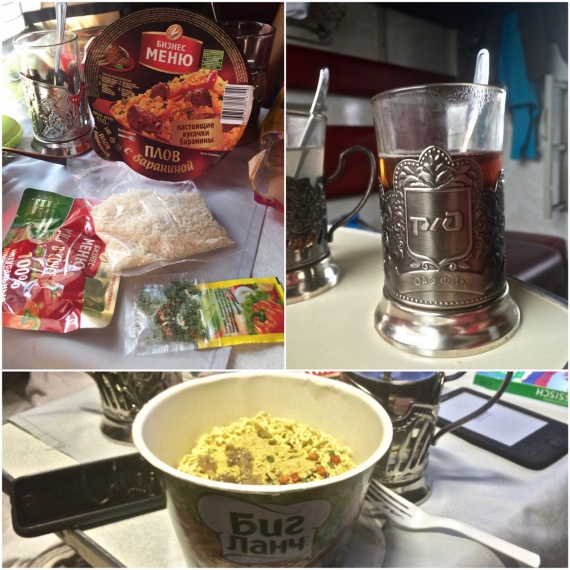 The stopovers therefore are a welcoming change to get some really decent food. We treated ourselves to a really nice meal each time we left a train. We found some really really good restaurants, with great food and reasonably prized along the way, especially in Russia. Our favourites:

The Britannia Pub in Yekaterinburg: Probably the most British Pub outside Britain, and the best even including the ones we visited in Britain (sorry, but it’s true). Staff speaks some English (should be expected), and the food is a great mixture of Russian and British. We had a Lunch there, a fantastic Roast Beef that got flambeed at the table (how awesome is that!) and a very tasty Bortschtsch with a meat pie. 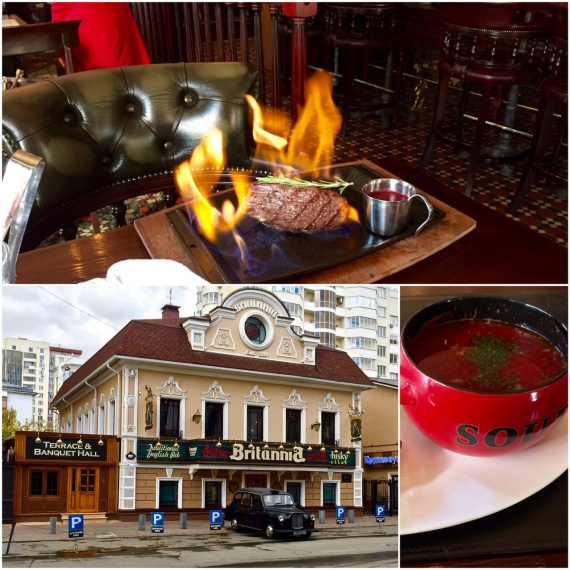 The Beerman and Grill in Novosibirsk: This place kept us from falling into bad depressions while in this grey city, we went there two of three evenings. The food is international and Russian (I can really recommend the Solyanka!), but it’s the service we liked best about this place. It’s that kind of service you rarely get in Germany anymore, very professional because the personnel is well trained, attentive but not bothering you too much, friendly in a way that feels real, warm and welcoming, we instantly felt at home. It’s right opposite the railway station. It seems to be a chain restaurant, but it doesn’t come with that anonymous feeling that often goes with chains.

Figaro in Irkutsk: An Italian restaurant that looks somewhat unimpressive on the outside, but has really great food. They don’t do pizza, but that doesn’t matter a bit. We went there two times for dinner and once for lunch and weren’t disappointed once. My favourites were the veal tongue and the sea bream. Also try the lasagna, which comes with grapes, giving it a nice twist. 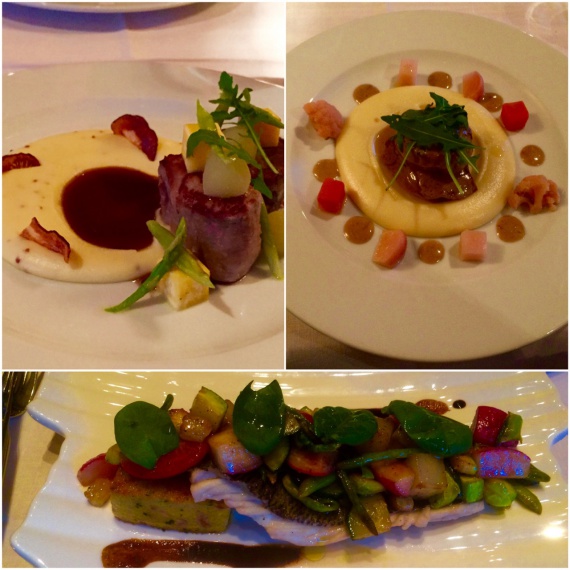 Veranda in Ulaanbaatar: Another Italian restaurant, and they do pizza – and they do it really really really good. I had possibly the best pizza ever here! You can also get burgers, Henry had one, and it was equally delicious. The portions are big, especially compared to Russia, where we usually went for a three course meal, here one main course is more than enough. I am seriously considering going back there just to have that pizza again! Still looking at the picture I took of it, dreaming… 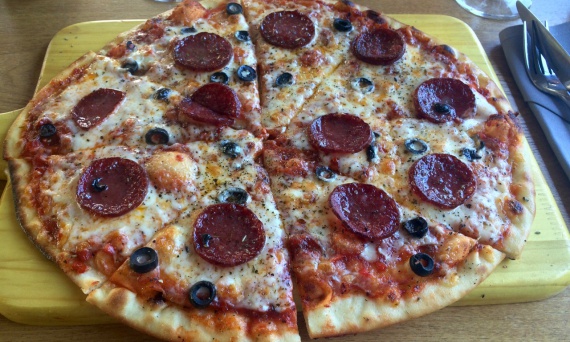 Surprisingly, getting into Mongolia from Russia was more of a hassle than crossing the Mongolia-Chinese border. When leaving Russia the train stood for roundabout four hours, during which the toilets were closed. The whole procedure started with Russian officers going through each compartment, examining the luggage stores in each one in great detail. They even had dogs. Next our passports were taken to invalidate our visa and brought back a few minutes later. Then the train drove on for a couple of minutes just to stopp again for the Mongolian border controls, which took longer than emigration from Russia. Officers would collect the passports and the immigration cards that had been issued earlier. After that they checked the compartments again and this time even the baggage. In the compartment next to us a German traveller got into difficulties explaining some homeopathic globules he was carrying. Saying “It’s nature medicine, better than usual medicine” really got the officer suspicious, so he had to open and explain every single item in his bag. He was let in in the end. But what a hassle. When the officer came to us we were prepared for the worst, but obviously she had had her share of trouble for the night, so we didn’t even had to open all our bags for her.

The crossing from Mongolia to China was smooth compared to that. Handing passports to Mongolian officers, getting them back, handing them to Chinese officers and getting them back very fast. No examinations of neither compartments nor baggage this time. It still took quite a while, but this time it was the train we had to wait for. Since the tracks have a different width in China than in Mongolia and Russia, all the carriages had to be lifted and put on a different set of wheels. That’s quite exciting to see, and bumpy, especially when they separate all the carriages. 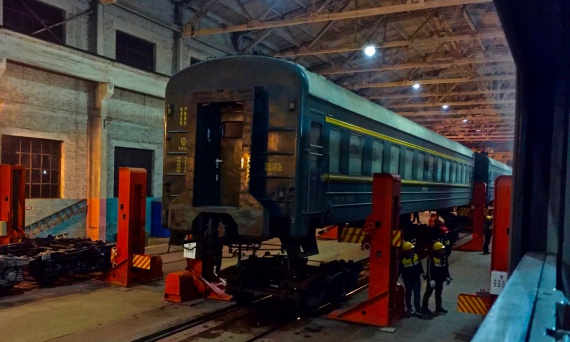 How to pass the time 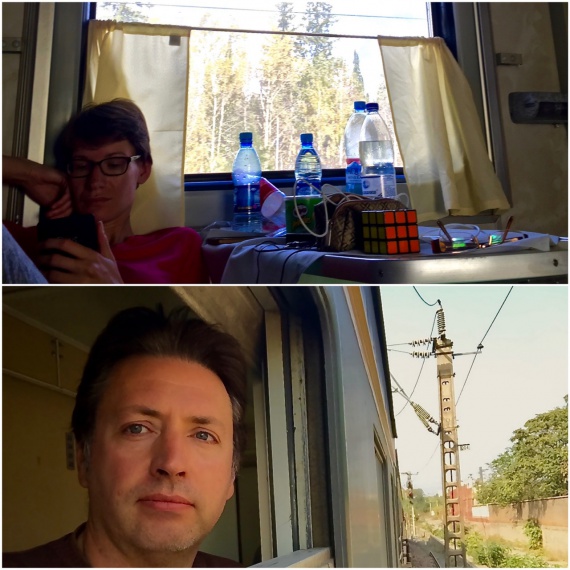 So when your done talking to your fellow travellers, eating, drinking tea, sleeping, it’s a good idea to have something to read (something easy, I finished two more books of George R. R. Martin’s Song of Ice and Fire series), to listen to, watch (and power banks for your smart phone or tablet), or play with (we had a Rubick’s cube and figured out to solve it on our first journey to Yekaterinburg).
And of course there is still window gazing. The trains are quite slow, they seem to never exceed 60 Kilometers per hour, so its perfect for admiring the differing landscapes outside or marvel at beautiful sunsets and -rises. I’d say the leg from Irkutsk to Ulaanbaatar is the most beautiful scenery we passed, for a long stretch the train is right next to the Lake Baikal. But also last few hours on the way into Beijing are really interesting, first beautiful mountains, then the “suburbs” and industrial districts of this vast city. 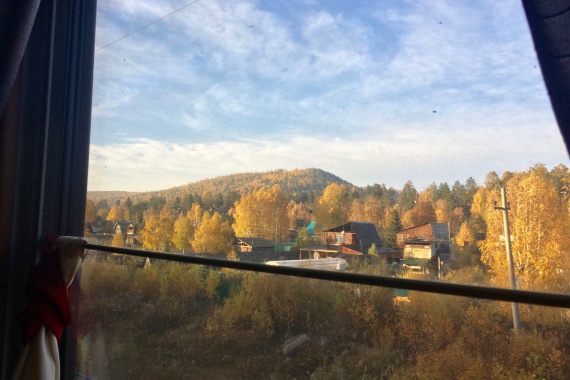 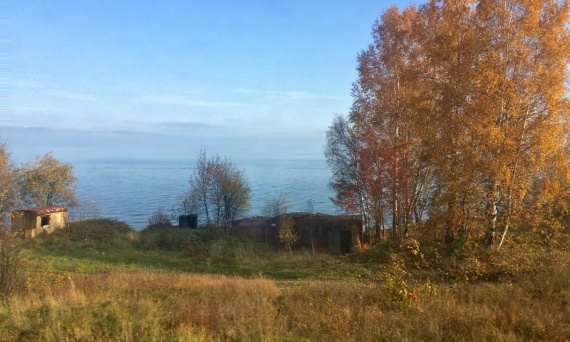 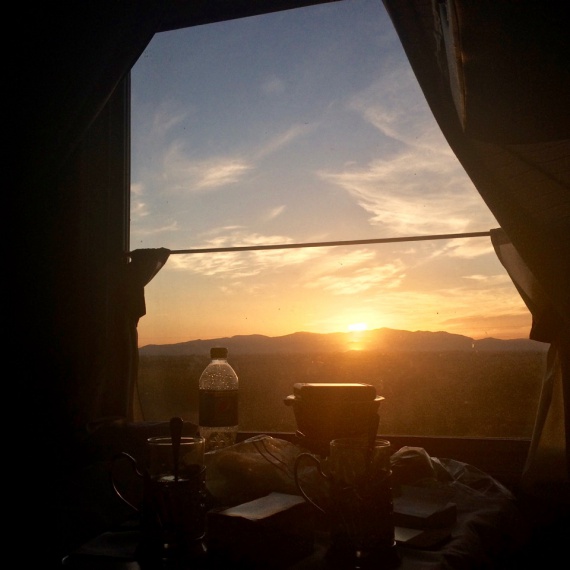