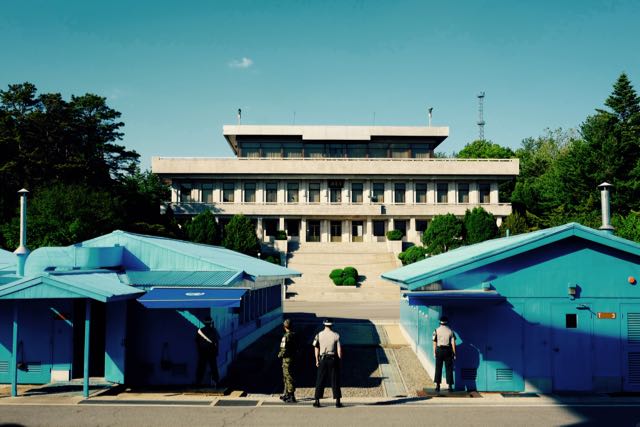 If your looking for a tourist experience that’s a little different, go on a tour into the Demilitarized Zone between North and South Korea. The Demilitarized Zone is a 2.5 miles wide strip of land forming the border between North and South Korea. Don’t get fooled by its name: it’s the most heavily militarized border in the world and dramatically announced by our tour guide as “the most dangerous place on earth”. Makes you wonder, why it’s still open for tourists.

“Where are you from?”

“Congratulations to the reunification of your country!”

At Dorasan station, the first stop on our tour, a conversation with the guy behind the “Interkorean travel information desk” started exactly like this. Dorasan is the northernmost station of South Korea and used to connect North and South. Now it symbolizes the hope of reunification. Signs direct you to “Tracks to Pyeongyang” and there is a big map of Eurasian train tracks on the wall – one day, Dorasan is going to connect South Korea to the Transmongolian and -siberian railway system and you will be able to travel from Seoul to Berlin by train, so the guy at the information desk explained to us. It’s a tragic place and the atmosphere is somewhat sad, looking spotlessly clean and new, like nobody ever uses it (which is not quite right, you can go to Seoul from here, so there must be real travelers apart from the tourists every now and then).

Next on our agenda was the Dora observatory, where we got to see a short movie on the history of the Korean War and then could peak into the Zone and North Korean territory using telescopes. The movie appeared to be from a different time, with it’s dramatic music and cuts, drastic pictures and almost propaganda-like tone. It was a clear day, so we could see quite far outside, even without the telescopes.

After that we went to see the so-called “Third Infiltration Tunnel”, one of the tunnels the North Koreans dug for surprise attacks on the South. We had to watch another movie, much like then one at the observatory, before we could go and have a closer look at the tunnel. Four tunnels are known of so far, but there are supposedly 20 or so more. The US Army continuously drills the ground to look for them. We were allowed to walk a short stretch into the tunnel, it’s quite a claustrophobic experience. If you’re taller than 1.60 meters, you better watch your head. They gave us helmets at the entrance for a reason. Pictures weren’t allowed inside the tunnel, but you can take a selfie in front of the replica of the tunnels “end” (at least to the part open to the public) placed outside.

The last destination on that tour was certainly the highlight, if you like to call it like this. We visited the Joint Security Area, where you get to stand eye to eye with North Koreans. Well, at a safe distance, but still. From here on we were accompanied by a member of the US Army, for “our safety”. Pictures were only allowed at certain places, and only when we were told it was ok.

Inside the Joint Security Area, two big buildings are facing each other, both containing facilities for meetings between North and South. The one on the South side is called “Freedom House”, the one on the North “House of Peace”, which sounds a bit like a relic of the cold war. In the middle between the buildings runs the Military Demarcation line, which is not to be crossed by either side. It used to be different, North and South were using this area jointly, but after a brutal incident commonly known as the “Axe murder incident”  in 1976, resulting in two deaths, a strict separation was mandated even here. There are three blue barracks standing right on the Demarcation Line. They have two entrances, one from the South and one from the North.

We had to leave all our belongings inside the bus. Cameras were ok to bring, also mobile phones, but strictly no bags. Getting anything out of a bag might be mistakenly taken as an act of aggression by the other side, and we most certainly don’t want that. We passed through “Freedom House” onto a big plaza. On the balcony of the “House of Peace” I could see a lot of North Korean Soldiers and I wondered if they do tours on their side, too. We didn’t get to stop here, but entered the middle one of the blue barracks straight away, using the South entrance of course. This is the conference room where the armistice agreement between North and South has been negotiated. Microphones on the tables are recording everything said 24 hours a day. And two fierce looking South Korean guards stand on watch. We were told not to walk right in front of them or try to get past the one guarding the door to the Northern Side. “Just don’t do it”, so our US Army guide. But we could take pictures with them, if we didn’t get too close. And pictures of us standing on North Korean territory, because inside the barracks is the only place you’re ok to cross the Demarcation Line without causing an international security incident… We got five minutes to take our pictures, then we had to follow our guide back out again. We lined up on the stairs in front of “Freedom House” now, facing the barracks and the “House of Peace”. The group of North Korean soldiers had gone, there was only one guard popping up every now and then and disappearing again. Maybe they knew that now it’s picture time for us. We got like 5 minutes to take pictures, only facing the North. We were not allowed to photograph any of the Southern buildings. Nor were we allowed to wink or make any other gestures to the North.

On the way back in the bus we stopped at a bridge, the “Bridge of no return”, to take pictures, but we were not allowed to leave the bus. Our guide explained, that Bill Clinton once walked a bit too far onto that bridge, attracting North Korean guards, so since then visitors aren’t let of the bus anymore. Thanks, Bill!

I still wonder how an area like this could become a big tourist attraction. Is it part of a strategy to deal with the North, telling them “Hey, we are not afraid of you, we even bring bus loads full of tourists here?” Is there even a little provocation intended? Or is it a means to somehow decrease the tension – like if there are civilians, innocent bystanders present, this would decrease the risk of another aggressive incident? We had to sign a waiver we wouldn’t  sue anyone in case we get injured or killed before coming here, though…