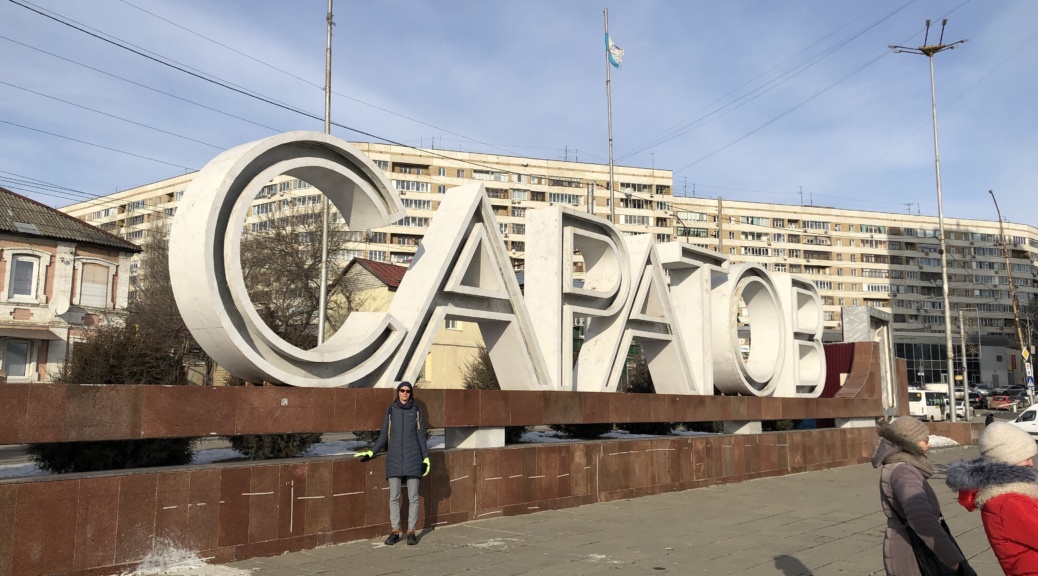 We only stopped at Saratov to take the train to Almaty, leaving from Saratov station every other day on its crazy-long more than 60 hours (!!) journey. To prepare ourselves mentally for that, and to relax after the 12 hour train ride from Moscow we decided to stay for three days.

What is there to say about Saratov? It’s definetly off the beaten path. No one speaks English here, not in our Hotel Polina, nor anywhere else really. But that’s ok, the hotel staff was very nice helping us to improve our basic knowledge of Russian, and for everything else there’s Google Translate. An internet flatrate sim costs 500r for 30 days and is limitless, tethering included.

Saratov used to be home to many Germans, you can still see the remaining influence in the many „Bier-Houses“ and „Bier-Fests“. There is even a „Küchenland Home“ on Kirov Prospekt. Doesn’t mean that people speak any German, of course….

Saratov lacks any „real“ tourist attractions in the traditional sense. But it has a nice atmosphere, positioned on the banks of the magnificent and huge river Volga. There is an interesting long bridge going over to the little town of Engels on the other side of the river, where Yuri Gagarin landed after his first flight to space. The bridge is longer than the Golden Gate Bridge, it actually used to be longest in Europe up to the middle of the 1980s. You can walk along the river on a promenade, which is exceptionally beautiful at sunset. At winter, you can actually walk on top of the icy Volga. We tried and the ice held.

Another nice place for a walk is the pedestrian zone in the city center, the Kirov Prospekt. Lots of nice, historical architecture with a european flair, nice cafés to warm up, and shops. The infrastructure for pedestrians and bikes is exceptionelly well thought-through in this city: you will find big alley-ways in the middle of all major roads, with trees, playgrouds, fitness areas and most important seperate ways for bicycles and pedestrians.

For those interested: we found out there is even a „boulder box“ in Saratov. You can check out there website here if you know some Russian. But according to the pictures on the internet it’s not bigger than a garage an only opens three days a week. So we skipped bouldering here. But we went for a run, half an hour in Gorodskoy Park. We did not make the ususal pace, since the pathways were sometimes slippery, but it’s overall a nice place to run – and to go for a walk, if you prefer. The park comes with a fair, with ferris wheel and other attractions, but unfortunately only opens on weekends in winter. We were there on Monday, I would have loved to go on a ride on the ferris wheel, that looked considerably more reliable than the one we went on in Novosibirsk five years ago.

What else is there to do? Bird watching, for example. Gorodskoy park is a great place for that, I saw pidgeons, ravens, sparrows and woodbeckers. People here seem to care for their birds in winter, and build all sorts of creative bird feeders from plastic bottles, containers and other things.

Going for coffee and cake is also a good idea. The local chain „coffee i chocolate“ even has an english menue, the only one we found in the city. Though you might want to stick to tea in Russia, it’s more a tea drinking nation. The quality of coffee varied, quite often between different stages of moorwater… There is one exception worth mentioning though: Volga Coffee Roasters on Altkarskaya Ulitza. When you come out of Saratov 1 train station follow the road that leads right and after a few meters you will see it on your left. Henry says it’s the best coffee in Russia so far. I can also recommend the Quinoa-Porridge I had for breakfast after we arrived from Moscow.

Finish the day with a great georgian dinner in one of the many georgian restaurants. We quickly decided on two favorite places: The Dschoz and the Katenka. Both along the pedestrian zone. At Dschoz, having dinner is more of a show event. Every 1000th order of khinkali is celebrated with the waiters doing a polonaise around the dining room, coming to a stop at the table that made the order. There, a toast is spoken (I suppose, I didn’t really understand) and the guests get a free drink. And a traditional georgian hat (which has to be returned when you leave). I know all this because we were the lucky winner at our first visit. I didn’t understand it though until I managed to translate it from one of the menues on our table.

In the meantime the waiters do some dancing, so it really is all abouth the whole experience.

I liked the Khinkali in Dschoz a little bit better than the ones in Katenka. But then I preferred the Khachapouri in Katenka. The atmosphere in the latter is more rustic and comfy, so if you prefer this to the big show than you should come to Katenka.

To sum it up: we came to Saratov without any idea what to expect and were pleasantly surprised. We were actually quite sad when it came to leaving…

One thought on “Saratov on the Volga”